A bill addressing free-speech rights on public college campuses in Iowa was signed into law on Wednesday. The law addresses student-organization rights, and opponents have called it a license for discrimination. 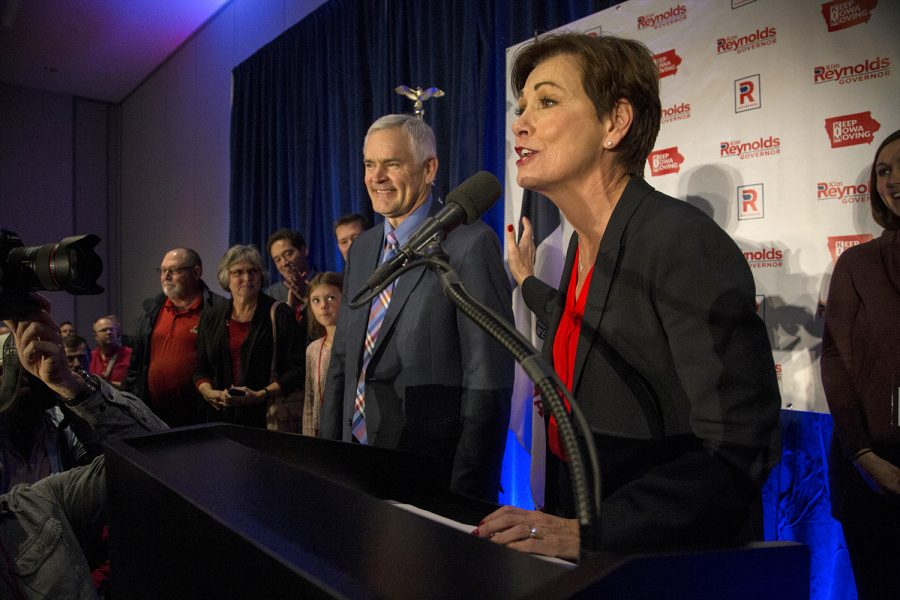 Re-elected Governor Kim Reynolds addresses her supporters at the Hilton in Des Moines on Wednesday, November 7, 2018. Reynolds defeated her opponent, Democratic candidate Fred Hubbell 50.19% to 47.61% with 92 counties reporting in an unofficial total.

Senate File 274 aims to protect free speech on community-college and regent-university campuses in the state. It prohibits “free-speech zones” and designates the public areas of campus as “public forums,” which explicitly allows all speech under the First Amendment.

“I am proud to sign this legislation into law, which protects free speech on college campuses,” Reynolds said. “Our public universities and community colleges should always be places where ideas can be debated, built upon, and creative thoughts flourish without limits.”

The signing comes after a court battle between the University of Iowa and Business Leaders in Christ, a student organization that alleged the UI violated its First Amendment rights. A judge ruled in favor of the group on Feb. 6.

The UI deregistered the Christian organization in 2017 after then-sophomore Marcus Miller claimed the organization discriminated against him when they revoked his leadership status upon finding out he was gay.

Business Leaders in Christ then sued the university on the grounds of religious discrimination, and a judge decided in favor of the organization, saying the UI did not properly apply its human-rights policy with student organizations.

The bill faced pushback from a number of Democrats in the state Legislature, with many claiming that the section on student groups was a loophole that allowed for discrimination.

Sen. Zach Wahls, D-Coralville, and Rep. Mary Wolfe, D-Clinton, both proposed amendments to remove the section concerning student groups that were ultimately voted down in their respective houses.

“The bill as it is written is insulting,” Wolfe said during a debate session on March 14. “It is discriminatory on its face, and I would ask that this body reject discrimination.”

In an email to The Daily Iowan, state Board of Regents spokesman Josh Lehman said the regents support the protection of free expression on college campuses, and it is a core principle of higher-education institutions.

Lehman did not say whether the law will directly affect policies at the regent universities, but he said there are currently university policies in place to protect speech.

“Our public universities already have policies in place to protect free expression,” Lehman said. “We are aware of the requirements of the law and will make sure our policies are in compliance.”