McComas: Government of all levels has joined together to help Iowans affected by extreme flooding

Parts of the Midwest have been turned upside down amidst the extreme flooding in the past two weeks. State and national governments have come together tremendously to find solutions for flooding. 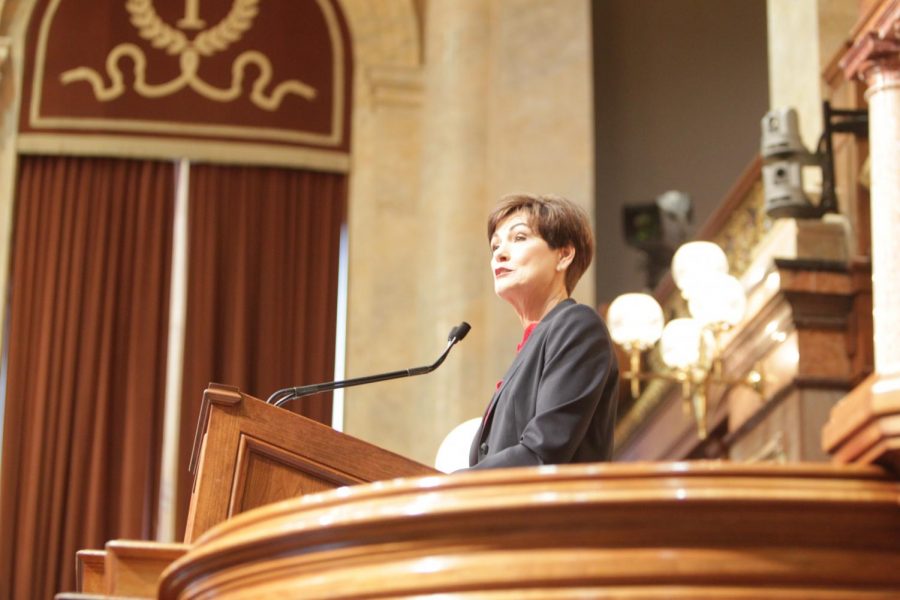 Iowa Gov. Kim Reynolds delivers her Condition of the State address in the House chamber of the State Capitol Building in Des Moines on Jan. 15, 2019. In the address, her first as an elected governor, she largely outlined bipartisan initiatives which have received widespread support.

States across the Midwest experienced notable snowfall throughout the winter, leading to immense flooding once temperatures rose. Extreme damage has resulted across many areas, with some of the most serious effects occurring along the Missouri River and in many small towns across Iowa. With many buildings, farms, and homes in ruin, Iowans have been begging for a plan to ensure that their towns will receive proper relief.

Shortly after panic set in across the Midwest, state and federal governments responded with proposals that resulted in action.

State government officials as well the federal government quickly realized that donations of funds and clothing, food drives, and some media coverage were not going to be enough to aid Iowans affected by the floods. After around a week of receiving temporary relief from neighboring communities, the Midwest received the attention and help it was waiting for in numerous ways.

This past week, Gov. Kim Reynolds proclaimed disaster in more than half the state’s counties, which has led state agencies to provide a number of programs and forms of assistance to people affected by the disaster. Without much delay at all, residents have been able to apply for grants, receive legal assistance, and create plans for recovery.

When the public complained that the relief resources were too limited and focused on the short term, the federal government stepped in to provide people with more aid.

The federal government saw that there was an outcry for national support and long-term aid to renovate and rebuild these areas, and it responded. Vice President Mike Pence met with Reynolds in Omaha on March 19 to inspect the damage firsthand, and shortly after, 56 Iowa counties were granted aid from the Trump administration’s major disaster declaration.

With more funding from the federal government, will Iowa properties, homes, and agriculture be renewed? Because the state rarely makes national news, the flooding could be a breakthrough for sufficient relief of damage across the state.

The involvement of both the state and federal governments has been exemplary — they have worked together to provide the state with the resources needed to respond to the physical losses such as property, businesses, and crops. American leaders on all levels and their corresponding agencies have also addressed the concerns of permanent despair rooted from disaster hazards such as unemployment and plunging local productivity and economic activity. The immediate action that was sent institutionally upward allowed federal organizations such as the FEMA to work with local relief efforts in Iowa. The efforts have been able to create an intensified initiative for recovery in flooded Iowa towns.

Towns such as Hamburg and Pacific Junction that saw recovery as a process close-to-impossible are now experiencing major public and individual relief as a result of the national-disaster declaration. Speedy relief efforts have created a multilevel coalition working to renew lost property as well as lost hope. The many contributors that have provided their time and aid to the state have highlighted the importance of unity and immediate action during a disaster — two elements that can go missing when disaster strikes smaller states that lack a large platform.

Some individuals have chosen to overlook this effort, but that does not mean that effort was absent. Iowans would not benefit from such immediate recovery if this were true.