Sen. Joni Ernst, Iowa’s first female senator, has amassed more responsibilities as she gains years in the Senate and looks ahead to a 2020 election. 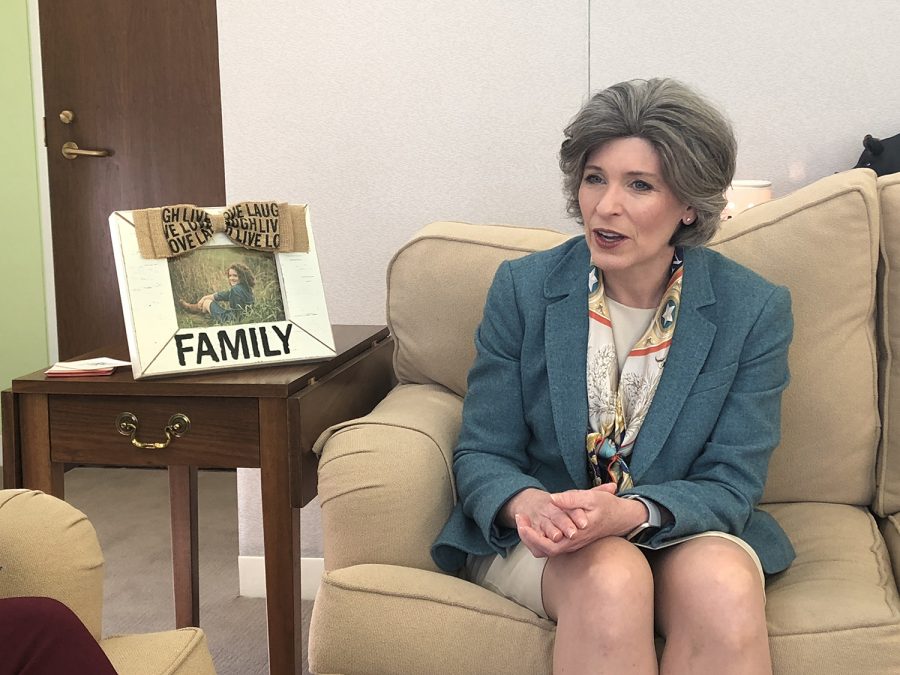 On shelves and tables in the office of Sen. Joni Ernst, R-Iowa, sit several pieces of swine-related décor. The pig statues are a reminder of her 2014 campaign, in which she emphasized her swine-farm background and told voters she would go to Washington to “make ’em squeal,” referring to her knowledge of castrating pigs and relating it to her ability to reduce government spending, and get things done in Washington.

Five years later, Ernst makes eliminating government waste a key component of her work as a senator. She’ll face a re-election campaign in 2020, when voters will decide whether to approve her for another six-year term and decide if she has indeed “made ’em squeal.”

Since her election, she’s steadily taken on more responsibilities as she gains seniority, which, she said, “allows a greater voice for the state of Iowa.” In November 2018, she was tapped for the No. 5 position in the Senate majority leadership, winning a contested vote for vice chair of the Republican Conference. She also helped negotiate the 2018 farm bill, key renewable legislation providing agriculture and food-assistance funding.

During the 2018 midterms, she campaigned for a first-time candidate (and now a fellow Republican senator) Cindy Hyde-Smith, on the trail Nov. 25 in Mississippi, headlining events on her own.

“It’s just really good to be able to support other women as well …” Ernst said. “But it’s something we all try to do for each other. Democrats do it, Republicans do it. Just show support for each other.”

Ernst is one of eight Republican women serving in the 100-member Senate (there are 17 Democratic women).

She said she is focused on serving in the roles she has now and thinking less about future leadership positions.

“I am good where I am,” Ernst said. “Of course in leadership, everyone tends to move up in leadership and responsibility. I am very thankful to be where I am today. I’m not looking ahead to any of that; I’m focused very much on how I can serve Iowa and how I can project Iowa’s voice to leadership.”

As a 2016 candidate, now-President Donald Trump met with Ernst, who was on a short list of possible running mates. In an interview in her office with The Daily Iowan, she said she declined to pursue the opportunity before she could be given an offer.

“It just wasn’t the right decision for my family and me at that point in time, and so it was very much a family discussion, and I decided not to pursue it,” she said.

Asked if she regrets her decision, she answered, “I don’t.”

Work she hopes to bring back to constituents include eliminating unnecessary spending, parental leave, and legislative priorities as a member of the Agriculture, Nutrition, and Forestry Committee and chairwoman of the rural development and energy subcommittee.

In March, Ernst introduced a bill that would allow people to defer Social Security payments to access paid family leave. She said she’s received pushback in Washington because of the delayed Social Security payments and expects conversations to last a few years before any kind of parental leave legislation is passed. Sen. Kirsten Gillibrand, D-N.Y., also has a plan in the Senate.

In agriculture, Ernst said, working to make sure there is a robust crop-insurance program for Iowa farmers is one of her top priorities, and the policy goes “under the gun” whenever Congress has to reauthorize the farm bill.

Ernst said that some Iowans are critical of federal subsidies that are sometimes tied to crop-insurance programs, but she pointed to the recent Midwest flooding that destroyed farms in western Iowa as an example of why insurance is important.

“This is one sector of our economy that relies heavily on Mother Nature, and sometimes that doesn’t go our way,” she said.

Expanding Iowa’s agriculture markets and strengthening trade relationships with China and other countries are also top priorities for her. With the U.S. being in the midst of a trade dispute with China, she said, it’s important to focus on opening other markets.

“Should we ever go through a trade dispute with China again, we want to know there are other avenues for our products to go,” Ernst said.

In terms of enforcement mechanisms to ensure China holds to its promises, she said,  she wants to see tariffs completely go away.