Now that basketball season is over, Connor McCaffery is focused on baseball, and head coach Rick Heller is impressed with his progress. 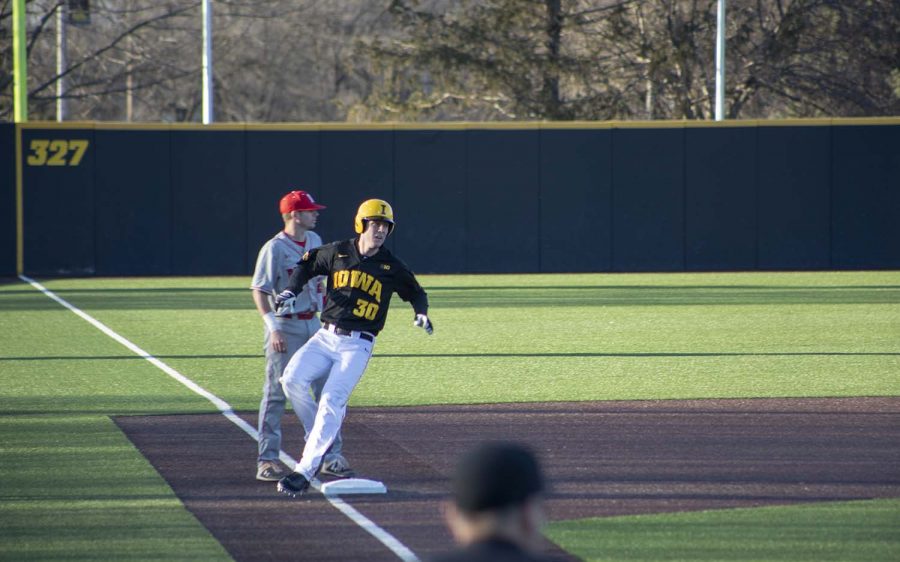 On Sunday, Connor McCaffery faced Tennessee in the NCAA Tournament with a Sweet 16 berth on the line. Just two days later, he was back in competition but not for the men’s basketball team.

On Tuesday, when Iowa baseball hosted Bradley, McCaffery was in the starting lineup for just the third time this season.

“Pretty much, I got back Sunday night, came in and hit Monday, and then was ready to play Tuesday,” he said. “Not a lot of time to think about [the NCAA Tournament]. I’m sure it’ll come back every now and again, but you know, playing through this baseball season, I want to stay focused on our goal with our team here. I want to keep my focus and my confidence 100 percent in the box and make sure I’m completely tuned in to being here at all times.”

Iowa head coach Rick Heller said that while he’s gotten some solid outings from McCaffery earlier in the season, he doesn’t expect the outfielder to jump in and have a monumental impact now that basketball is over — he’ll need some time to get into the swing of things.

“We’ve seen some really good arms, and we’re going to see some big-time arms every week in the Big Ten,” he said. “It’s going to take Connor a little bit of time to get his timing back and get adjusted back to full-time baseball.”

After Iowa’s 4-2 win over Bradley, McCaffery thinks he’s right on schedule with where he wanted to be, transitioning from basketball to baseball.

Heller echoed that belief, saying he’s been surprised by his progress while working a balancing act.

“I would say maybe even a little ahead of what I thought before it all happened,” Heller said. “But it’s because he comes in and gets his stuff done.”

McCaffery said his hectic schedule was basketball first, baseball second from the winter up until now.

Now, those roles have flipped.

“[Now], 100 percent baseball,” he said. “Wednesday, I’ll just be going straight to baseball practice. When basketball workouts start, those will pretty much in the middle of baseball practice or games, I’m assuming. So, I’ll be I’ll be here, and it’ll be just [when] it was in basketball season, [but] my schedule for baseball — if I was able to go to something I would. If not, I’m fully locked in on baseball.”

McCaffery, who D1Baseball ranked as the top Iowa prospect and seventh-best MLB prospect in the Big Ten, gives the Hawkeyes power in the batting lineup, and it comes at a perfect time.

This past weekend, Iowa struggled to find offense in three losses to Indiana. Combined, the Hawkeyes managed just 4 runs on 21 hits.

On top of that, McCaffery brings versatility on the other side of the ball, Heller said.

“We can play him in left field, we can play him [in] right, we’ll work him so he can possibly play first base, which would be a big one — he is a nice target for the infielders,” Heller said.

Against Bradley, McCaffery went 0-for-3 and stole a base. But in the four games he appeared in prior to that, he went 4-for-8 and had a team-high .600 on-base percentage.

“Connor is a very big piece in our lineup,” Lorenzo Elion said. “He brings positive energy — you love to be around him. With the way he swings and his atmosphere, it brings a positive energy to the team and lifts everybody up.”