A dropped line drive by the Bradley right fielder was all Iowa needed to pick up a midweek win. 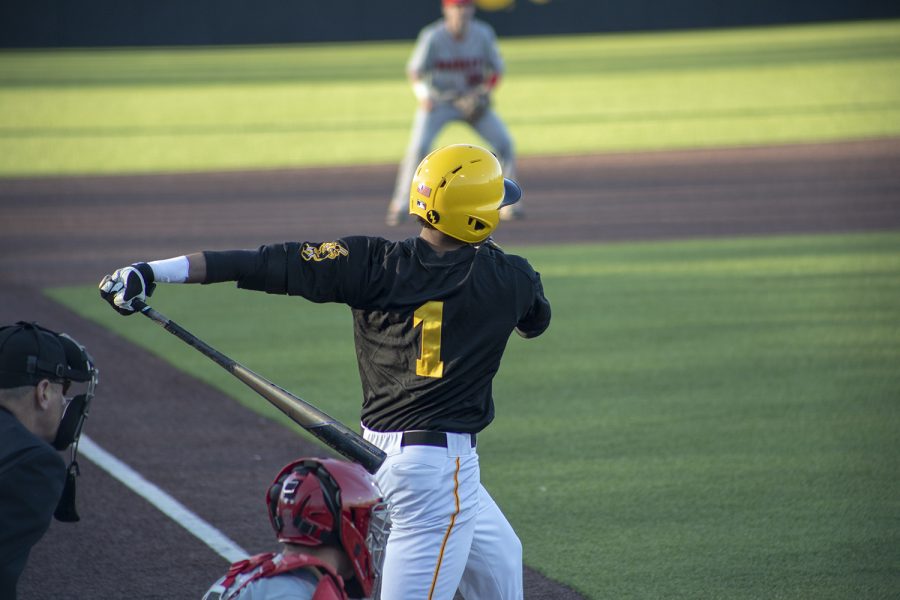 Iowa's Lorenzo Elion swings at a pitch against Bradley on March 26, 2019. The Hawkeyes defeated the Braves, 4-2.

A lucky error was exactly what Iowa baseball needed.

After dropping three in a row to Indiana over the weekend, the Hawkeyes needed to bounce back and gain some confidence in their midweek game against Bradley on Tuesday.

Trailing 2-1 in the eighth inning, Lorenzo Elion picked that confidence right back up for his squad with a bases-clearing error that bounced off the glove of the Bradley right fielder.

Iowa scored 4 runs in three games against the Hoosiers just days ago. In the eighth inning alone against the Braves, the Hawkeyes matched that mark.

Entering the bottom half of the inning facing a 2-run deficit, Austin Martin started the rally with an infield single, and three batters and one single later, scored on a wild pitch.

The pitch moved runners to second and third, then Chris Whelan got plunked by a pitch to load the bases. That was all Elion needed to get aluminum on the ball. Luck took over from there, as Bradley right fielder Jean-Francois Garon lost the ball in the sun, allowing it to carom off his glove to score 3 runs.

“I wasn’t trying to be a hero or hit the ball over the gate,” Elion said. “Just put a good swing for my team, and it ended up working in my favor.”

After a scoreless first two innings, Bradley got on the scoreboard first with a single run in the third, but it could have been worse for Iowa.

After Hawkeye starter Duncan Davitt put two on with a walk and a single, Dan Bolt brought in a run with a single through the right side and advanced another runner to third.

With just one out and the Braves threatening, Iowa head coach Rick Heller called upon reliever Trace Hoffman to extinguish the fire. He did just that, punching out two batters in a row to get the Hawkeyes out of the inning.

When Iowa couldn’t get anything going offensively in the early innings, the pitching was exactly what it needed.

Davitt only gave up 1 earned run in 2.1 innings of work. Hoffman followed by allowing just 1 hit and 1 unearned run in 1.1 innings on the bump. While those performances were solid, they didn’t compare to Trenton Wallace.

Wallace followed Hoffman and proceeded to retire 10 Braves in a row. By the game’s end, Wallace finished with 1 hit and 1 walk allowed, striking out six in 4.1 innings to keep the Braves at bay.

“I think for me, pitching with conviction and believing in everything I do on the mound with each pitch,” Wallace said. “You got to have a lot of trust behind yourself, just as your teammates in the field have trust in me as a pitcher.”

Now that it gained a smidgeon of confidence with the comeback win, Iowa turns its attention to a hot Illinois squad.

The Illini enter the game ranked No. 25 by D1Baseball with a 17-5 record after losing their midweek contest to Indiana State on Tuesday, 3-1.

The series against Illinois allows Iowa to compete against a team that’s near the top of its game at this point in the season.

“Sometimes you just need to take a deep breath, and that game – escaping with a ‘W’ [Tuesday] – gives us a chance to do that,” Iowa head coach Rick Heller said. “Very similar to Indiana, [Illinois’] really playing well right now and gives us a good challenge to try to rise up and play a good series.”