Marinelli looking to bounce back next season

Top-seeded Alex Marinelli didn’t do as well as expected at NCAAs but still has two more years to capture a national title. 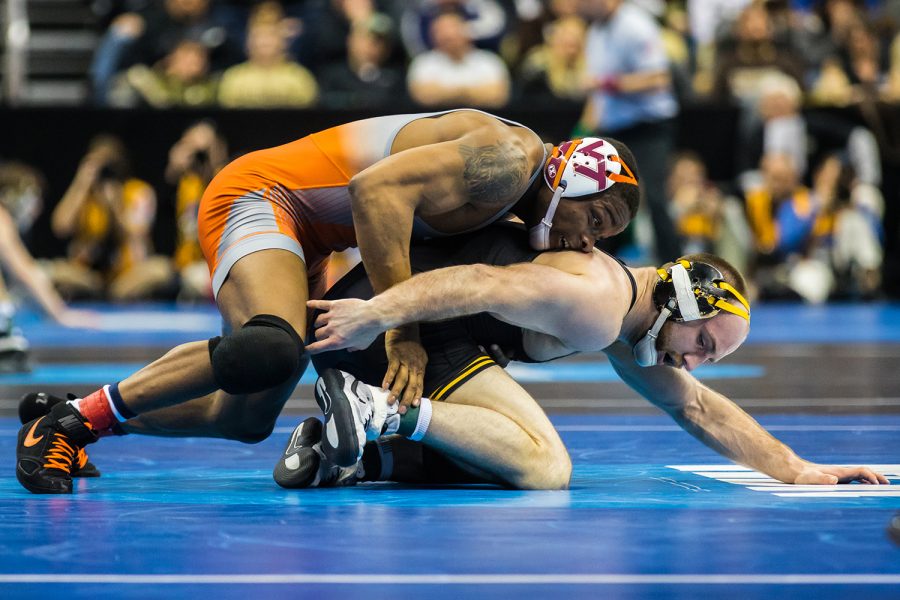 Of the six Hawkeye wrestlers who were ranked in the top 10 heading into the NCAA Championships, four did better than their seeding suggested.

Despite these four wrestlers’ improvements, two Hawkeyes fell short of their expectations — Jacob Warner placed seventh after being seeded fifth, and Alex Marinelli fell the most.

Iowa’s 165-pounder was a favorite to leave Pittsburgh with gold but settled for seventh.

Going into the final test of the season, Marinelli was coming off a dominant win over top-seeded Vincenzo Joseph at the Big Ten Championships. The Hawkeye claimed the 165-pound title, beating the Nittany Lion, 9-3, to remain undefeated.

This perfect season came to a sudden halt in the quarterfinals of the NCAAs when Marinelli faced the future champion in Virginia Tech’s Mekhi Lewis. Lewis handled the top-seeded Marinelli, 5-3.

“I had some losses that were uncharacteristic of me, and Tom [Brands] said when I walked off the mat with the quarterfinals, I just didn’t wrestle how I should’ve,” Marinelli said. “You guys could probably see it — saw it in my first match. Get taken down twice, was just super uncharacteristic of me. I need to stop being so sloppy.”

But there wasn’t much time for the Hawkeye to dwell on his first loss of the season; there were more matches remaining for Marinelli to fight for All-American status.

RELATED: Hawkeye wrestling looks to be better in 2020

“He’s a competitor, first of all, and he loves to compete,” head coach Brands said after Marinelli’s quarterfinal loss. “He was talking to himself the right way on the way back here — lots of disappointment but was talking to himself about the future. The future is coming up right now. This is a big round for honors.”

Marinelli then defeated No. 6 Logan Massa of Michigan to secure an All-American honor but fell to No. 5 Chance Marsteller, 9-6, in his next match.

Again, Marinelli was forced to look to the next best thing: seventh place. Last season, the 165-pounder placed sixth, losing his last match of the year, but Marinelli pulled away with a 9-3 victory over No. 11 Bryce Stewart.

“I tried to think of what [Thomas] Gilman would do, like losing at the national tournament senior year. He said, ‘What’s the next best thing?’ ” Marinelli said. “Tom says it’s always easier to move on with success, so today I wanted to end it off with a good note.”

Before Marinelli stepped onto the mat for his placement match, he got to watch as Young upset Northwestern’s Ryan Deakin in sudden victory for the second time in the tournament.

This victory gave Marinelli the motivation he needed to finish the 2018-19 season on a high note.

“That’s one of my best friends right there, so, seeing him win right before I go out is just a huge motivator, and that’s a lot of heart because he lost to Deakin at the Midlands and [has] beaten him twice this tournament, [which] is super impressive,” Marinelli said. “Obviously, I believe in Young, and he believes in me, and I’m proud of him.”

Although Marinelli didn’t wrestle up to his projected ranking, he is still only a redshirt sophomore. He has two more years to add a national title to his impressive résumé, which includes a 25-0 record in dual competition in 2018-19, 46-8 overall in varsity competition, a Midlands title, a Big Ten championship, and two All-America honors.