Small-town Hawkeye Kyle Groeneweg knows the time is now for a shot at the NFL - that, and more highlights from Iowa's Pro Day on Monday. 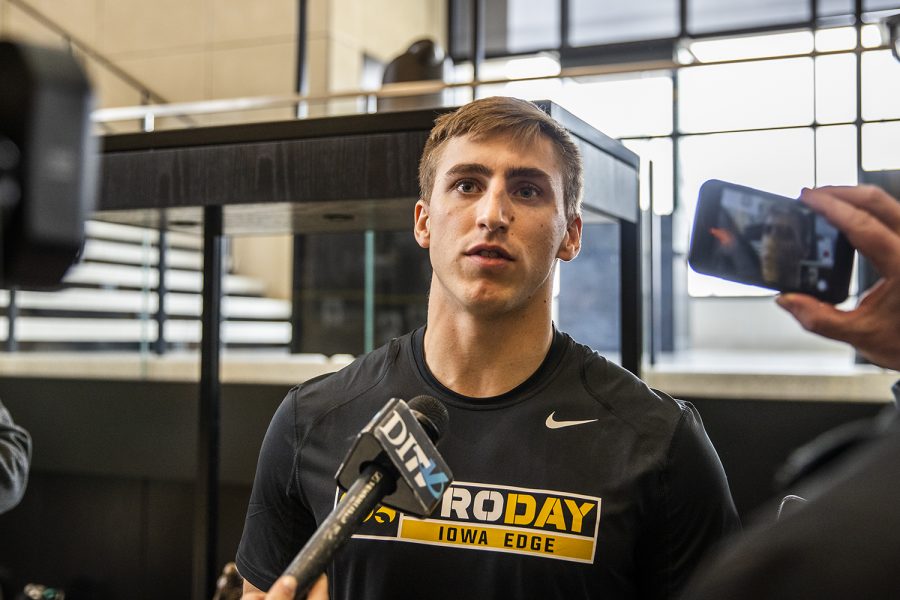 Hawkeye wide receiver Kyle Groeneweg hails from Inwood, Iowa – roughly a 350 miles trek from Iowa City. The population stands at 828 (as of 2017), and in the town, his parents Pam and Bill own a livestock hauling business.

Eventually, he wants to get into the family business.

“My mom and dad started their company back in 1993, and I’ve kind of grown up in this agriculture community. It really inspired me watching my parents work their butts off every day… just seeing them work hard and build something they started from the ground up, that’s really inspiring. I want to start there when this is all said and done.”

Until then, however, he’s making a run at the NFL.

“That’ll always be there when I go home – my parents told me that from day one,” Groeneweg said. “I’m going to give this my absolute all. I’m as close as I’m going to be right now than I’m ever going to be.”

Groeneweg said it himself – he doesn’t possess the eye-popping statistics that some of the other potential NFL receivers boast heading into the draft.

This past season, the senior caught 4 passes for 47 yards and ran twice for 14. He did his best work, however, in the return game.

Groeneweg returned 24 punts for 238 yards (9.9 yards per return) and even took one back for a touchdown against Illinois. He added a pair of kickoffs and 54 yards as well.

Groeneweg believes his speed will be his ticket at a potential shot at the pros. On Monday during Iowa’s pro day, he ran a 4.43 40-yard dash, which led the team.

Regardless of what happens in these next few months, Groeneweg said at the moment, he’s going all in on a chance to stick with an NFL team.

“I can’t really say how long I’m going to work at it. Time will tell for the most part what my shot is,” he said. “You hear feedback from scouts – word spreads around. You’ve got a to get a realistic chance at what you’ve got.”

On Monday, Fant explained that following his training in California and work at the NFL Combine, he’s back in Iowa City.

“It’s a lot of fun, fitting right back in,” he said. “It was good seeing all the guys. This will be my home base for the next month or so.”

Fant said that his biggest goals for working out West were to gain weight while maintaining his speed, and he honed in on upper-body workouts.

The tight end also noted that he caught passes for a number of different quarterbacks prior to the combine in order to begin building a little rhythm.

Working out with Chris Doyle or taking graduate classes – which is harder?

Senior safety Jake Gervase said on Monday that these past few months following Iowa’s win over Mississippi State in the Outback Bowl have been stressful.

The Davenport native explained that he’s enrolled in 15 semester hours of graduate classes on top of his training with Doyle, Iowa’s strength and conditioning coach.

“Some long days, but it’s all been worth it,” he said.

When asked which is harder – taking 15 semester hours of grad school or working under Doyle, Gervase had a clear-cut reply.

“Doyle, for sure,” he laughed.