Nicholas Baer will be remembered for a lot of things, but his effort and character sit at the top of the list. 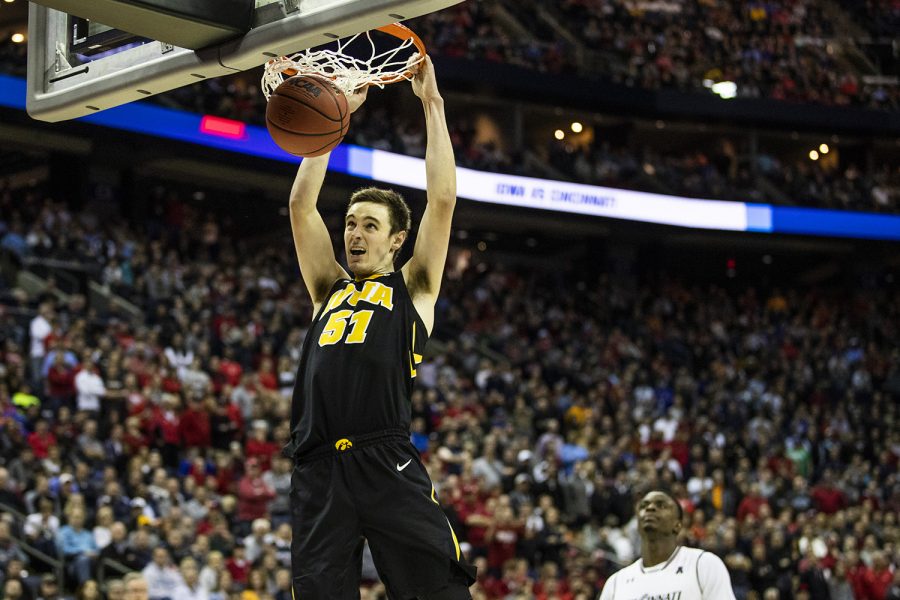 during the NCAA game against Cincinnati at Nationwide Arena on Friday March 22, 2019. The Hawkeyes defeated the Bearcats 79-72.

After facing a 25-point deficit earlier in the contest, Baer hustled like a lion chasing its prey to grab an offensive rebound after a missed Isaiah Moss free throw. He secured the board and dished it to Jordan Bohannon, who hit a 3-pointer to cut the Volunteer lead to just 5 in a sequence that was the epitome of Iowa basketball.

That rebound — and the fight the Hawkeyes showed in the attempted comeback — exemplifies who Baer is as a basketball player.

Whether it was draining an important 3, hustling for an offensive rebound, or finding a way to get his hand on the ball on defense, Baer will always be remembered for his blue-collar style of play.

“I always try to pride myself on playing hard,” he said. “It’s never about how many shots you make or certain stats really. It’s about what effort level you play with … I try to play my tail off every day in practice or in games, and I hope people remember that.”

The work ethic that Baer prides himself on on the court became a trait he needed to have early in his career.

A walk-on from Bettendorf, Baer redshirted his first year with the team before getting minutes as a redshirt freshman.

After introducing fans to the Baer they have come to know and love, he earned a scholarship heading into his sophomore campaign.

He’s not the fastest, tallest, strongest, or most athletic player to ever wear the Tigerhawk, but followers of the program would be hard-pressed to find another player that competed as hard as Baer did each game.

Now that his Hawkeye career has come to an end, Baer said he’s going to attempt a professional career in basketball.

Before he moves on, though, he said he’s going to enjoy as much time as he can with his teammates. That’s what a team gets with Baer — a true teammate.

Numerous Hawkeyes got emotional talking about Baer following Iowa’s elimination from the NCAA Tournament, and it’s with good reason — players such as Baer don’t come around very often.

“I told him, I said, ‘I’ve been doing this over 30 years. I’ve never had anybody like you,’ ” Iowa head coach Fran McCaffery said. “I’m going to miss him. Five years. He’s always there, he’s a rock-solid person.”

While the Hawkeyes will certainly miss Baer as a person and a teammate, it will be a long time before they forget the passion that could change games on the hardwood. Just like he did against Tennessee.

“At the same time, he’s a great player,” McCaffery said. “The play he made on the offensive rebound kick out, that just typifies who Nicholas Baer is. It just changed everything in terms of [the] game.”