The Hawkeyes have a tough test ahead in No. 2 seed Tennessee. As Iowa looks for an upset, The Daily Iowan presents the keys to the game. 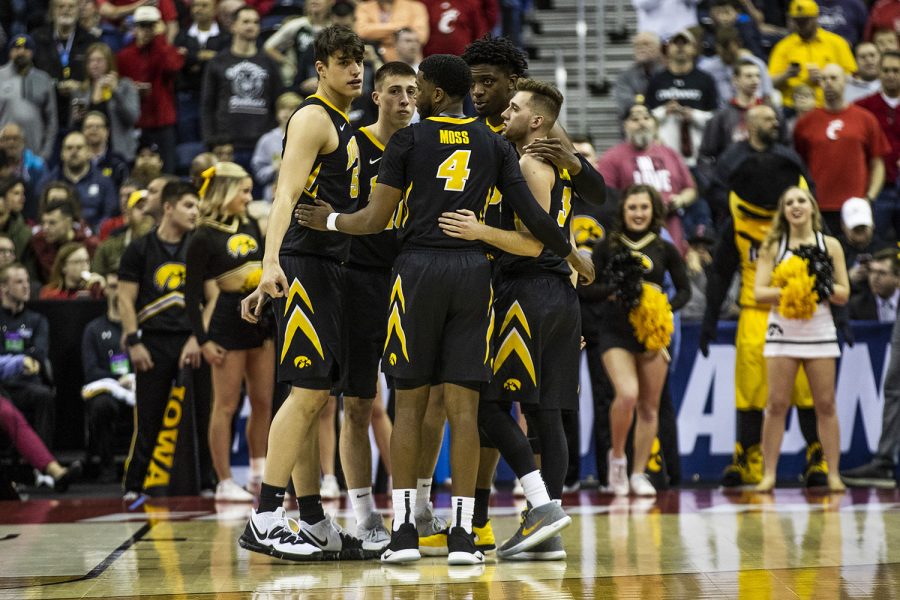 Iowa players come together before the NCAA game against Cincinnati at Nationwide Arena on Friday, March 22, 2019. The Hawkeyes defeated the Bearcats 79-72.

COLUMBUS, Ohio – With a chance for a Sweet-16 appearance on the line, 10-seed Iowa takes on 2-seed Tennessee in the round of 32 on Sunday.

Contain Grant Williams. Colgate kept the two-time SEC Player of the Year to single digits for just the third time all season and almost pulled off the upset.
Be comfortable in a shootout. Both teams like to push the pace, but the Volunteers rank 21st in the country with 81.7 points per game.
Make 3s. It’s been true seen it all season, including the first-round win over Cincinnati; when Iowa hits from deep, it’s a dangerous team.

Share the ball. The Volunteers excel in ball movement, as they rank fifth in the country with 632 assists.
Stay out of foul trouble. Tennessee has committed 605 personal fouls this season. Star forward Grant Williams averages nearly three per game.
Turn Sunday into a track meet. The Hawkeyes are 4-7 when opponents score more than 80 points this season. The Volunteers are 18-2 when scoring more than 80.

Defense is a priority. This Volunteer squad shoots 49.6 percent from the floor and scores 81.7 points per game. The Hawkeyes can’t afford to turn this game into a track meet. Iowa is 19-4 when holding opponents below 80 points per game (right about where Tennessee averages).

It beats Iowa on the perimeter. The Hawkeyes need their 3-point shooting if the game becomes a high-scoring affair. Ranked 189th in opponent 3-point percentage (34.4), Tennessee can’t let the Hawkeyes get hot from deep.