Both Iowa tennis teams opened up Big Ten play over the weekend, with one team getting off to a hot start, while the other struggled. 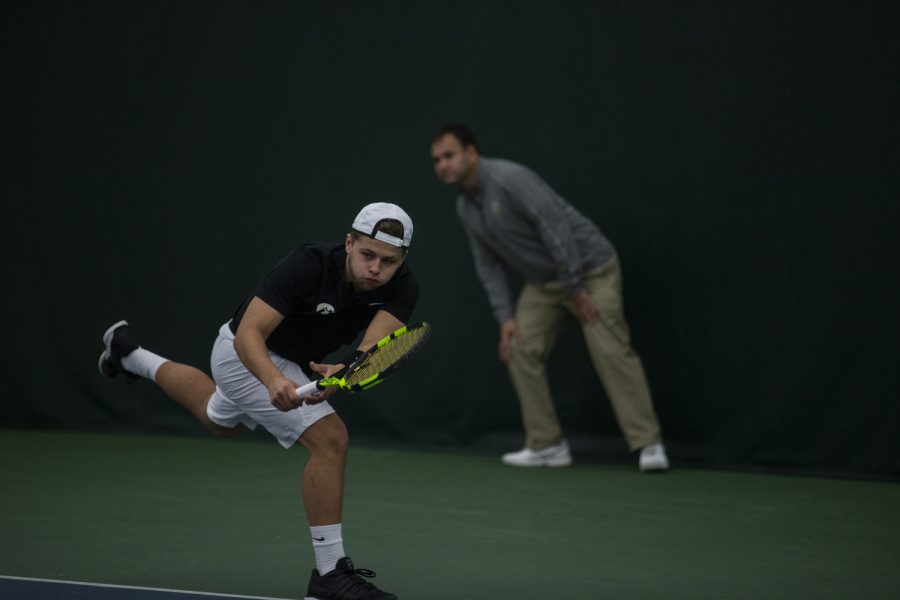 Will Davies dives to save the ball during men's tennis against the University of Nebraska Omaha at the Hawkeye Tennis and Recreation Complex on Feb. 15, 2019. The hawkeyes defeated Omaha 5-2. Davies and his double's partner Oliver Okonkwo lost their match.

The Iowa men’s tennis team seems to be in peak form as it gets ready for the final stretch of the season. This past weekend, the Hawkeyes continued their Big Ten play and picked up wins against No. 18 Minnesota and Wisconsin.

However, more impressive than the team’s first ranked win of the season is the way the team beat the Badgers. Winning both matches (4-3) Iowa was able to do something against Wisconsin that it hasn’t done all season — managing to steal a victory without winning the doubles point.

Jonas Larsen, Will Davies, Joe Tyler, and Jason Kerst all battled back to win four of six singles matches, boosting Iowa to its first win without the doubles point.

“To have multiple guys step in and play, especially our second doubles team that hasn’t played together since the fall, was big for us,” Iowa head coach Ross Wilson said in a release. “Jason stepped up and won along with Joe winning in three sets. Jonas has been phenomenal, and he continued that out here today. Our rock, Will, played the No. 4 spot and crushed it there at the end. Our guys are tough and determined. They deserved this, and they’ll enjoy it for the next few days.”

Additionally, the Hawkeye made more history. This was the first time in 30 years that Iowa has defeated Minnesota and Wisconsin in the same season

The Iowa men will resume action when they head to Illinois to battle Northwestern and the Illini.

The women’s team, on the other hand, wasn’t so lucky. The Hawkeyes continued their losing ways in the Big Ten, dropping all three matches against Michigan State, Michigan, and Ohio State.

In each case, things weren’t relatively close. Iowa lost to the Spartans (4-3), but in the other two matches, it combined to win just one singles match courtesy of Ashleigh Jacobs.

Although things haven’t looked great for the Hawkeyes in recent weeks, head coach Sasha Schmid is still able to maintain a positive outlook.

“It’s been tough to come short of 4 points; however, our only option is to be resilient,” Schmid said in a release. “There’s no doubt progress is being made each time we play, and we have to keep growing, maturing, and staying hungry for the team victory.”

Iowa has now dropped seven of its last eight matches after beginning the season 7-0. The Hawkeyes (8-8) will try to bounce back in the Big Ten when they resume action against Purdue and Indiana at home on March 29 and March 31.