The Iowa men's gymnastics team clinched a share of the Big Ten title, while the women had a solid performance at the Big Ten Championships. 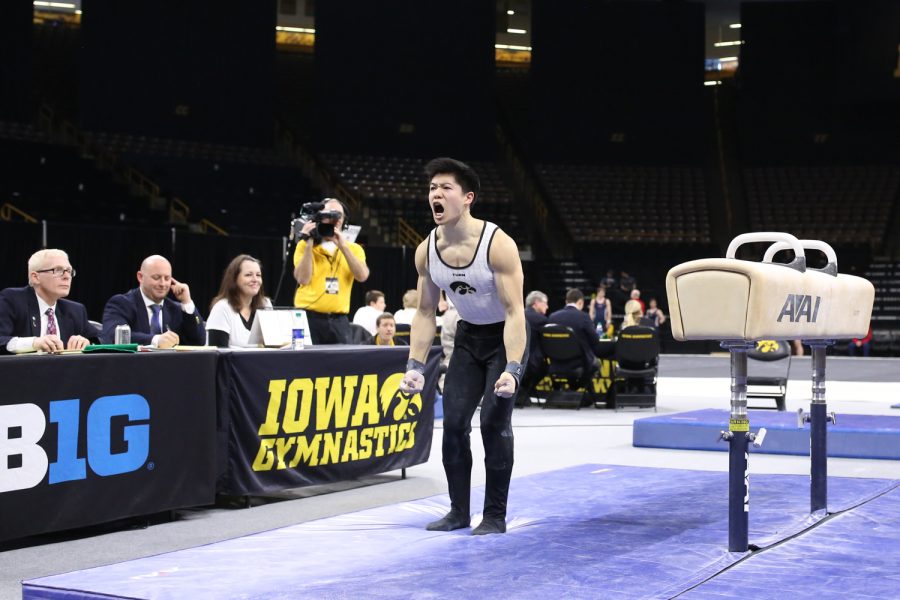 Iowa gymnast Bennet Huang celebrates after dismounting the pommel horse during a gymnastics meet against Minnesota and Illinois-Chicago on Saturday, Feb 2, 2019. The Golden Gophers won the meet with a total score of 406.400 with the Hawkeyes scoring 401.600 and the Flames scoring 355.750.

The Iowa men’s gymnastics team earned a share of the Big Ten title on March 23. It marks the first time a team has been awarded the title during the regular season, as well as the first time since 1998 the Hawkeyes won the conference title.

“I am incredibly proud of the boys. They performed really well,” Iowa head coach JD Reive said in a release. “This is what we trained for this week, so we did what we prepared to do. We are going to get back in the gym so we can do it again when we host Big Tens in Iowa City.”

The team traveled to Minneapolis to compete against Minnesota and Penn State, taking second place among the teams with 406.350 points.

Eight scores at the meet set career bests or season highs for the Hawkeyes, including Jake Brodarzon’s career-best score of 14.500 on rings to take first.

“We all had an undying belief that we could win this title and wrote it on our board in the gym to look at every single day,” Brodarzon said in a release. “It was one of the hardest journeys we’ve been on, but we did it together.”

Senior Bennet Huang secured the second place all-around score to the 2018 NCAA event runner-up with 81.250 points. Huang also led the team with confidence in the program and the squad’s abilities.

“I’m super proud of our entire team for winning the Big Ten regular season,” Huang said in a release. “From the start to the finish of the meet, our guys put up a huge fight, and every single person had each other’s backs.”

Entering the competition, the Hawkeyes had a three-match winning streak, notching victories over Nebraska, Michigan, and Ohio State.

The men’s team will return to Carver-Hawkeye to host the Big Ten Championships on April 5-6. After Big Tens, the men will head to the NCAA Championships in Champaign, Illinois, April 19-20.

While the men’s team continues to train for a bigger competition, the women’s team grabbed sixth place at the Big Ten Championships at Penn State with 196.075 points. It marks the third-highest score of the season for the GymHawks as well as their fourth score of more than 196 points.

Other highlights included Lauren Guerin’s score of 9.900 on floor to tie a career-high, a career high on beam by Misty-Jade Carlson (9.850), and a tied career-best score on beam by Bridget Killian (9.825).

The GymHawks will continue competition as they secured a spot in an NCAA regional.