Helton: 20 Out of 20: Pete Buttigieg, the newest Democratic rockstar, is blazing his own path to the White House

The young, gay veteran and South Bend Mayor is having a moment with his unconventional pitch for the presidency. 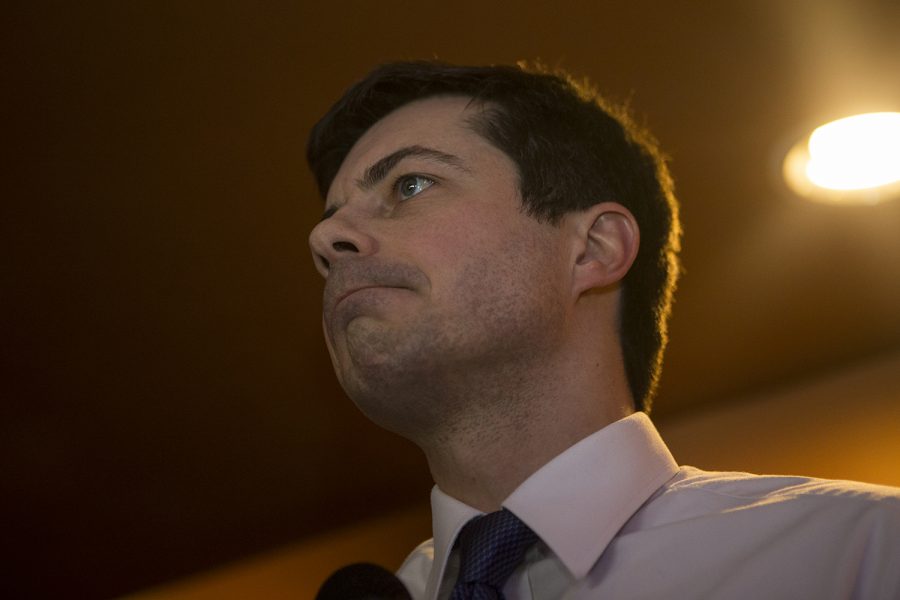 Pete Buttigieg listens to the testimony of an attendee during his visit to Airliner in Iowa City on March 4, 2019. Buttigieg, Mayor of South Bend, Indiana, has declared a presidential exploratory committee, joining a slew of democrats who may be running.

During spring break, I knew I was going to write an installment for 20 Out of 20. I thought I’d finally cover Joe Biden, the former vice president and leader of virtually every Democratic primary poll to date. Or perhaps I’d discuss Beto O’Rourke, the former congressman and Gen-X pretty boy who rose to national fame with his losing effort to turn a Texas Senate seat blue last year.

But stealing a bit of the thunder from the larger-looming figures in the primary is yet another Democratic upstart. Mayor Pete Buttigieg of South Bend, Indiana, is running for president, and his campaign is gaining traction.

His appearance on “Morning Joe” and viral appeal to some of the political internet have given the rising star more attention than most thought possible.

Is he going to be nominated?

Buttigieg — or “Mayor Pete” as he likes to be called — knows he doesn’t have the most standard résumé for a presidential candidate, and he’s counting on his unique experience and identity to set him apart in the clustered Democratic field.

But he isn’t treating these characteristics as potential setbacks, instead; he’s leaning into them as his qualifications.

His record in South Bend includes redevelopment programs and an increasing population after decades of decline. His youth makes him the first millennial to seriously run for president, which gives him special perspective on time-sensitive issues such as climate change. His sexuality is another sign that it could be time for a younger generation to take over. A gay president would have been unthinkable just a decade ago but at least for right now, it doesn’t seem to be hindering his campaign.

“I am not skilled enough or energetic enough to craft a persona. I just have to be who I am and hope people like it,” Buttigieg said in an interview with the Washington Post.

His poll numbers are already on the rise as more people are exposed to his brand of authenticity. It isn’t impossible that his persona could carry the young mayor past the frontrunners and to the top of the ticket.

RELATED: 20 Out of 20: Baldwin brings relief from incivility

Is he going to beat Trump?

In many ways, Buttigieg seems to be the opposite of the incumbent President Donald Trump.

He’s has been a commissioned officer in the U.S. Naval Reserve since 2009 and served seven months in Afghanistan in 2014. Trump received five deferments avoiding service during the Vietnam War.

Buttigieg is a Rhodes Scholar who speaks with high levels of comprehension and nuance — he’s definitely one of the smartest of the presidential hopeful alongside Sen. Elizabeth Warren, D-Mass. Trump’s communication style is often broad and as simplistic as possible.

A polyglot, Buttigieg is conversational in eight languages, a fact made notable by his recent demonstration of his Norwegian skills. Trump reportedly refers to the country of Nepal as “nipple.”

His home state of Indiana is probably too Republican to flip in the next year and a half, but the competition for more purple states such as neighboring Michigan and Ohio would be interesting to watch with a Midwesterner vying to take back the Rust Belt.

Of course he’s a long shot, but Mayor Pete has his share of the spotlight for the moment. He might just shine bright enough to change his nickname to President Pete.