Iowa softball brought back a win in its conference-opening series against Purdue. 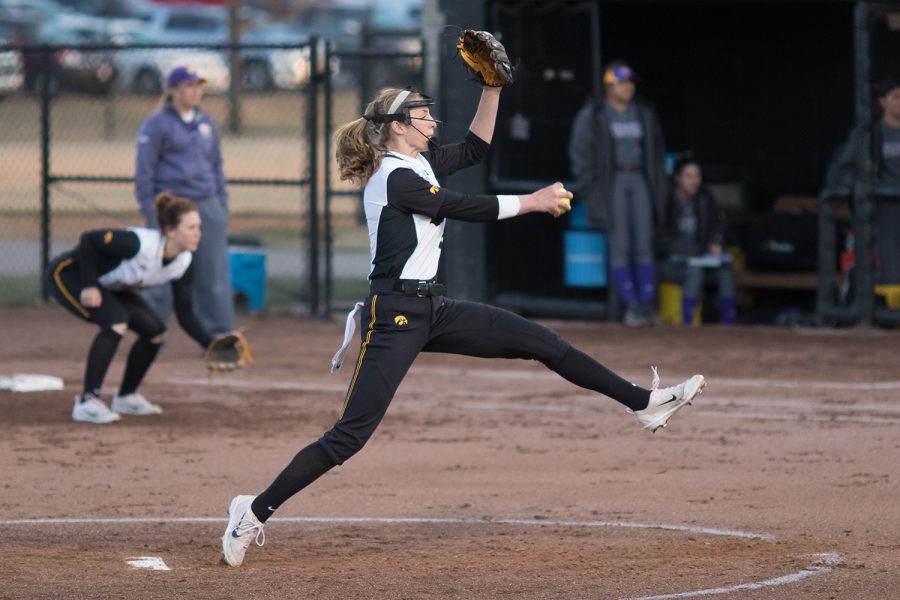 University of Iowa softball player Allison Doocy winds up to pitch during a game against Western Illinois University on Tuesday, Apr. 17, 2018. The Fighting Leathernecks defeated the Hawkeyes 2-1.

First-year Hawkeye softball head coach Renee Gillispie turned over another milestone on March 22, seeing her first conference games at the helm of the program.

Iowa took on Purdue in West Lafayette on March 22 and 23, featuring three games with a doubleheader on March 23. Iowa dropped the first game but split the doubleheader, giving Gillispie her first Big Ten win at Iowa.

Purdue finished two slots ahead of Iowa in the conference standings in the 2018 season, so the weekend also gave the Hawkeyes a look at what they will deal with in the conference. Still a tough team, Purdue made Iowa work for the first Big Ten win.

Iowa had it in its grasp on the first day of action. The Hawkeyes carried a lead into the third inning after junior transfer DoniRae Mayhew blasted a home run into center field, bringing in senior Mallory Kilian. Iowa had a decent day hitting against the Boilermakers but left several runners stranded. The Hawkeyes didn’t score after the first inning.

Ace pitcher Allison Doocy was in the circle for the Hawkeyes, but a double from Purdue’s Kasey Wilhoit in the bottom of the seventh inning helped the Boilermakers to a walk-off win.

A good showing in the circle from Purdue’s Kaitlynn Moody kept Iowa’s offense down in the first day of action.

“The biggest thing Purdue was throwing was the change up, and she threw that a lot for strikes,” Gillispie said. “We weren’t able to get behind it and do anything with it.”

Iowa saw some daylight in its first game of the next day’s doubleheader.

Doocy, again in the circle for the Hawkeyes, gave Purdue’s offense a hard time. The junior allowed only 3 hits in a complete game, on her way to her 13th win this season.

“[We’re] doing a good job of settling in and getting focused on what we need to do,” Gillispie said in a release. “Getting that first Big Ten win under our belt is important.”

It was all Purdue to finish the weekend. The Boilermakers gained an early lead in the first inning and never looked back, cruising to a 4-2 win over a tired Doocy and a quiet Hawkeye offense.

However, pitcher Erin Riding relieved Doocy and posted some solid innings. Even though the senior has not seen as much action this year, she only gave up 2 hits in 3.2 innings, giving Iowa an extra arm.

“Purdue is a tough and good-hitting team, and we knew coming out that we had to play our best,” said Gillispie. “Doocy did a great job in the circle, and [Riding] came in during that last game and showed a lot of strength and composure. I feel good about her going into our next series next weekend.”

Although the team dropped two of its three weekend games, hurdling the milestone is a big deal for Gillispie. The team has proven it can get hot when Mayhew and Doocy are at their best.

Because the team is very young, it still needs to discover its identity. It is doing that early in the season, but there’s a lot of work ahead to bring the program back on the hilltop.