Four-of-five Iowa wrestlers ended their seasons on a win, and now only one Hawkeye remains. 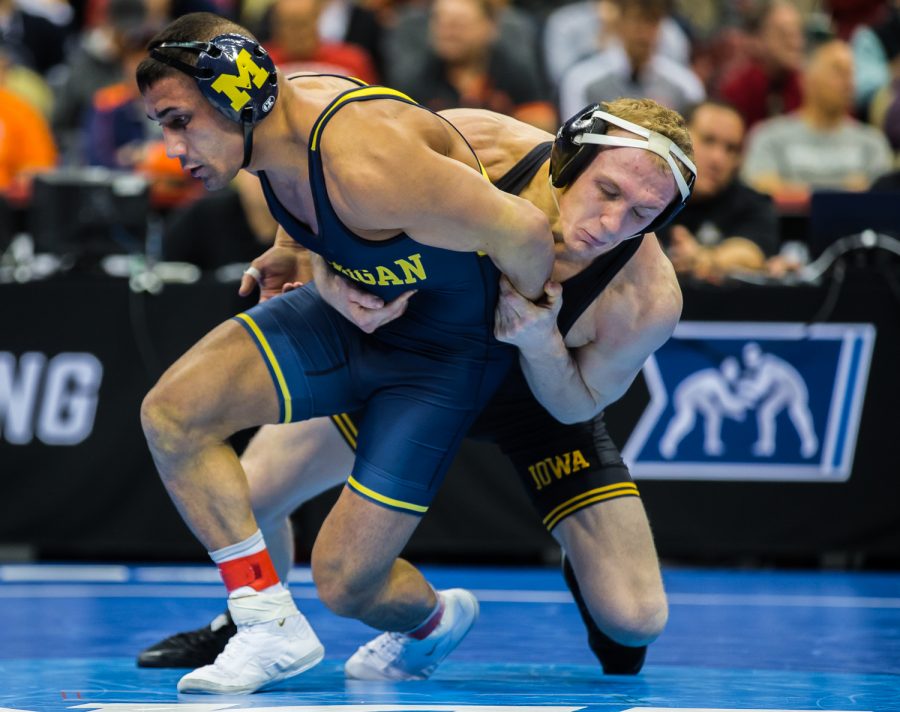 PITTSBURGH – The Hawkeyes have only one match remaining, and it’s the big one.

Before Spencer Lee takes the mat to close out Iowa’s run at the NCAA Championships, take a look back on what his teammates accomplished in the medal round.

To open Iowa’s day, Ohio State’s Luke Pletcher defeated DeSanto in a tight, high scoring match. DeSanto jumped out to an early lead, but Pletcher kept pace with him until the final minute in the third period, where he scored a go-ahead takedown, 7-6, with no time for a DeSanto comeback.

In the fifth-place match against John Erneste from Missouri, DeSanto came back for the next best thing – a win in his final match of the season. He scored two takedowns in the third period to rack up the score and continue his dominance for the extra riding time point to finish 11-6. For the first time in his career and in his debut season as a Hawkeye, he finished the tournament an All-American.

Lugo came out of the tunnel hard in the seventh-place match, scoring two takedowns and a 2-point near fall in the first period. However, three escapes and a takedown by Jarrett Degen from Iowa State tightened the match, and Lugo’s second stalling call tied it up at 6. Each wrestler tallied a reversal to end the second and in the third period Degen jumped ahead, 10-9, with riding time at the end.

This was Lugo’s third NCAA Championships after qualifying twice with Edinboro, and the first time he’s earned All-American honors.

Young’s dominant nature in all of his matches seemed to falter as he competed against Alex Pantaleo from Michigan. Pantaleo got ahead on the scoreboard quick and held Young to only two escapes in the match for a 6-2 win.

As for Young’s fifth-place, it was a mirror of his quarterfinals – both against Ryan Deakin from Northwestern. As the clock went out on the third period, Deakin scored a takedown that was ultimately taken away after ruling that time had ended. In sudden victory, Young scored a takedown on Deakin for the second time in two days to finish fifth.

Last season Young sat in the stands during NCAAs, and now he leaves after taking his place on the podium.

Marinelli put his nickname, the Bull, to good use in his final match. Facing off against Bryce Steiert from Northern Iowa, he came out of the gate with a takedown and a 2-point near fall. He kept tacking on points with two escapes and another takedown and only allowed Steiert to score three times.

His 9-3 finish after control for riding time ended the sophomore two-time All-American’s tournament, one placement lower than he ended last season.

Warner wrestled hard in his final match of his first NCAA Championships. He started the scoring with a takedown late in the first period before falling behind briefly in the second. A takedown gave him the lead again, and in the third he piled on with another takedown and an escape, taking control of the match enough for a riding time point. Honis scored once more, but Warner’s finish, 8-4, was enough.

What’s next: Team standings and the finals

Iowa will finish the tournament in the top-4 and currently has 72 team points. Penn State holds the lead with 123.5, followed by Ohio State (96.5) and Oklahoma State (84).

On Saturday night, Spencer Lee will go for his second NCAA title against Jack Mueller from Virginia.