Connor McCaffery never doubted his status against Cincinnati, even though he had chills, threw up, and was hooked to an IV before tip-off. 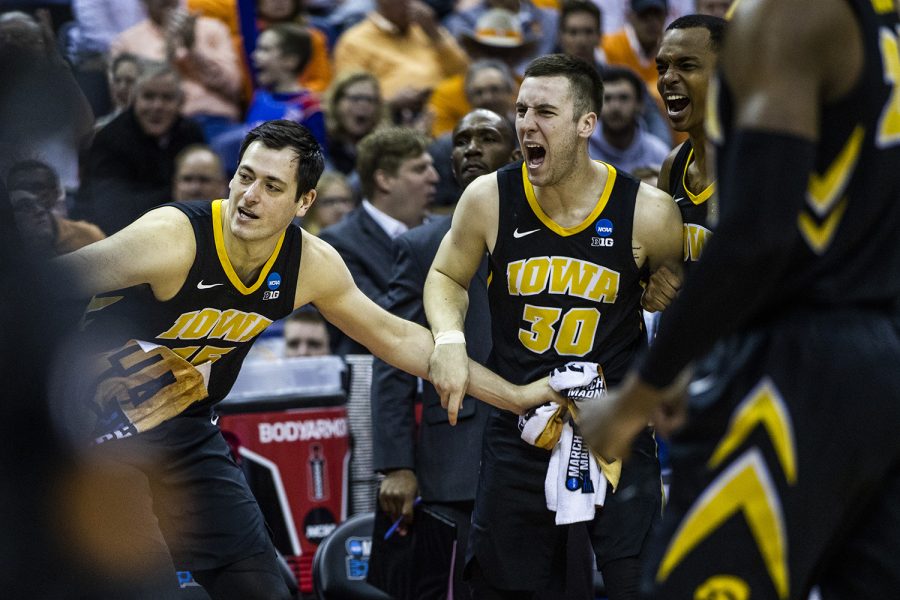 Iowa players cheer during the NCAA game against Cincinnati at Nationwide Arena on Friday, March 22, 2019. The Hawkeyes defeated the Bearcats 79-72.

COLUMBUS, Ohio – Despite throwing up, dealing with the chills, and being hooked to an IV, Connor McCaffery never questioned his status for Iowa’s game against Cincinnati in the NCAA Tournament.

“Pretty much the whole time, I was expecting to play,” he said. “In my mind, I was playing. I was going to try and do whatever I could to get out there with them and play.”

On Saturday, McCaffery said his health was much better. But, he said the pregame scene on Friday was chaotic; McCaffery didn’t warm up or stretch before taking the court minutes before tip-off. Teammate Tyler Cook said he didn’t even know McCaffery was sick, and once he found out, he wasn’t sure the redshirt freshman would be able to play.

McCaffery did play, and in 10 minutes, he scored 3 points, dished 2 assists, and notched a +3 in the box score. He was one of just five Hawkeyes to record a positive plus/minus against the Bearcats.

“He gave us some great minutes,” Cook said. “Knocked down a shot, found some guys, played the way he plays.”

However, the point guard isn’t known for his shooting. McCaffery owns a 36.1 shooting percentage, which ranks last out of Hawkeyes who play at least 18 minutes per game, and on 20 occasions this season, he’s taken three shots or less.

According to his teammates, it’s his versatility, though, which makes him one of the team’s most valuable contributors.

“[It’s] everything he can do offensively without shooting the ball,” Cook said. “He finds guys, gets people open. He puts guys in position to be at their best. On top of that, he can shoot the ball. I’m always trying to get him to shoot more. He’s a really solid player, doesn’t make mistakes, and fights on the defensive end, too.”

McCaffery averages 4.5 points, 3 assists, and 1.5 rebounds per game this season, and he’s thrived in the role as the primary facilitator.

When on the floor, McCaffery has a 27.2 assist percentage – the top mark out of any Hawkeye with legitimate minutes this season. With the ball in his hands, players like Jordan Bohannon have added freedom to move without the ball.

“He freed me up last game, for example, and I was able to move off the ball,” Bohannon said. “Especially with [Cincinnati’s] pressure, it takes a lot out of the point guard trying to get the ball up every time. It’s definitely a pressure release for me, and I can definitely get more shots off when he comes in the game.”

Against Cincinnati, Bohannon scored 13 points, the most he’s dropped in a single game this postseason.

“You get two different looks with Connor and Jordan in the game – Jordan’s more of a scoring guard even though he does a good job setting up too,” Cook said. “I think they complement each other well, and they complement this team well.”