Hawkeye wrestling looks to be better in 2020

The Iowa lineup is expected to be great next season, but it has a lot of work cut out for it in the meantime. 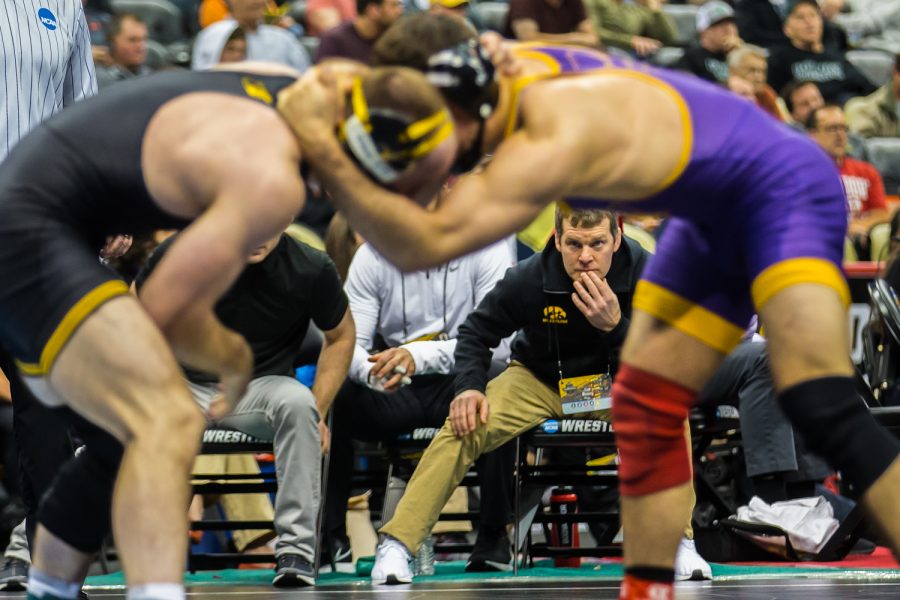 PITTSBURGH – The Hawkeyes named six All-Americans and one national champion over the course of the weekend, and now the focus is to the future.

Max Murin and Sam Stoll were one win away from the podium, and Cash Wilcke lost one round prior.

“It’s crazy because the guys that didn’t All-American here, how close were they? I mean, they were so close, and it’s heartbreaking. I feel for them, it sucks,” Marinelli said. “We’re only going to get better, and that’s what’s scary to these other guys. We’ve got returning guys and we’re going to be really good.”

Also coming back at Iowa’s weakest weight from this season, 174, is Michael Kemerer, who was out for the season with a knee injury.

In 2018, Kemerer finished fourth at NCAAs and is a two-time All-American.

For Iowa, bringing him back is going to be a boost in that specific weight class as well as a boost in team points over all. Kemerer – like Lee – piles on the scores in his matches for bonus points.

“I definitely think we’re building, kind of missing out on Kemerer this year, that might have hurt us a little bit, but I think we’re okay mentally,” Young said. “Just having him in the lineup and it’s fun having him wrestle and go out there and score a lot of points.”

Iowa’s All-Americans bring back a solid foundation, but there’s still more work that needs to be done.

Everyone could have wrestled better in the consolation bracket, sometimes beating themselves instead of being beaten. However, winning any placement matches was important to Iowa, and shows where they are at and where they can be next season.

In addition to its returners, Iowa has a group of young guys in Iowa City that are ready to get back to work.

“We have to start right now phase one,” head coach Tom Brands said. “These guys that are here have got to have a break, and those young guys are getting ready for the international season. After a couple weeks these guys will start getting into the strength and developmental phase.”

Those freshmen in the wrestling room have already started buying into the Iowa wrestling culture and could be the future of the program.

Their futures start, however, by vying for a spot in Iowa’s jam-packed lineup.

“We definitely have a lot of good guys coming in, a lot of guys with their heads in the right place,” Young said. “They’re motivated, they want to work hard, and they’re not afraid to get out there and go after it.”

Iowa’s projected lineup for next season starts at 125 with Spencer Lee, followed by Austin DeSanto at 133. The 141-weight class could be up for grabs, but with Max Murin’s performance this weekend he has the chance to retain his position.

Kaleb Young is at 157, followed by Marinelli at 165 and Kemerer at 174. Cash Wilcke could come back at 184 as one of the only wrestlers at that weight class, but some competition is expected. Jacob Warner should keep his 197-pound position, with the lineup being rounded out by Tony Cassioppi, who already has experience as he filled in for Stoll through most of the season.

However, nothing is guaranteed for anyone, and every Hawkeye will be working hard for the chance to competing for an opportunity at the NCAA Championships next season.