Iowa turned to Joe Wieskamp as it clawed its way back against Cincinnati, and he delivered. 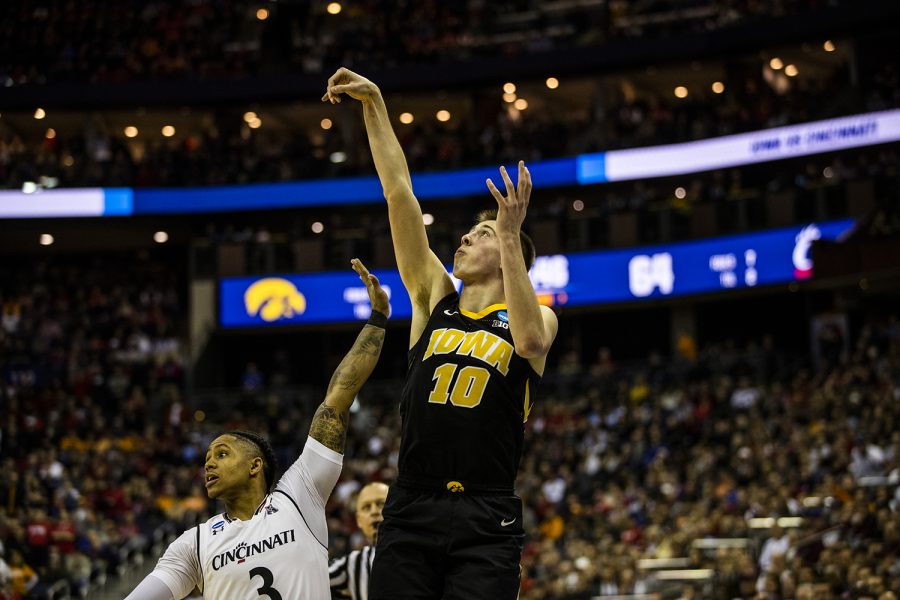 Iowa guard Joe Wieskamp shoots a three-pointer in the last few minutes of the NCAA game against Cincinnati at the Nationwide Arena on Friday, March 22, 2019. The Hawkeyes defeated the Bearcats 79-72. (Katina Zentz/The Daily Iowan)

COLUMBUS, Ohio – All season long, the conversation around Joe Wieskamp has been, “He’s only a freshman.”

On Friday, Hawkeye fans – as well as basketball junkies across the country – saw just how good the first-year forward is.

Wieskamp dropped 19 points on 6-of-8 shooting and snagged 5 rebounds in Iowa’s 79-72 win over Cincinnati in the NCAA Tournament.

“It felt great,” he said. “All those hours in the gym by yourself, with the trainers, all the different coaches, that’s where all the hard work comes from.”

Nicholas Baer entered Friday as the only Hawkeye player with NCAA Tournament experience on his resume. But, early on, Wieskamp played as though he was a regular, and his efforts in the second half echoed his cool, calm composure.

“Supreme confidence,” guard Isaiah Moss said. “That’s something [Wieskamp’s] had all year, and I’m really happy he played so well.”

As a team, Iowa fought back after falling behind early and never gave in. The Hawkeyes clawed back after a tough run in the first half to eventually lead in the later half of the second.

“Composure, poise – those are the things you have to have in the NCAA Tournament,” Wieskamp said. “You can’t get tentative, you can’t get nervous out there.”

During the Iowa’s uphill battle, Wieskamp played a key role. He sank a free throw, cutting Cincinnati’s lead to 3 points, and then less than a minute later, he nailed a 3-pointer to tie the game.

Then, he hit arguably the biggest shot of the afternoon – a 3-pointer to increase Iowa’s lead to 6 points with 1:39 to play.

On that play, Jordan Bohannon drove and kicked it out to Wieskamp – a play that had worked for most of the game.

“I don’t know if it was necessarily a good shot – [the defender] was up in my face – but I was feeling it,” Wieskamp said. “I had confidence taking it.”

The Hawkeyes are letting ’em FLY! ??

Iowa has a 6pt lead with under 2 minutes left.#MarchMadness pic.twitter.com/gquNm8w0iy

Early in the first half, though, Wieskamp wasn’t anywhere close to taking heat checks.

The Muscatine native started the game off rocky, turning the ball over on Iowa’s first possession of the game. Cincinnati grabbed the pass and drove in for a layup, jumping out to a quick 2-0 lead.

Additionally, it took Wieskamp nine minutes of game time to make his first bucket of the contest.

“A lot of times when that happens guys struggle for 40 minutes,” Iowa head coach Fran McCaffery said. “[Wieskamp] has always done a really good job of figuring out what are they doing to me? What are they doing to us? What can I do that’s different than what I’ve been doing? He’s a very cerebral guy in that sense.”

A lot of Hawkeyes have made key plays as of late this season, including Wieskamp.

First, his banked shot at the buzzer on the road against Rutgers. Then, his dagger triple against Cincinnati in a do-or-die situation.

Wieskamp has suited up in a Hawkeye uniform 34 times. A year ago, he was still in high school. But he said after win over Cincinnati that he doesn’t feel one bit like a first-year Hawkeye.

“I’m a freshman, but I feel like I’ve been here for a while,” he said. “I’ve had so many games under my belt – even AAU – I really don’t view myself as a freshman.”