According to his coach, McCaffery was throwing up and hooked to an IV prior to Friday's contest. 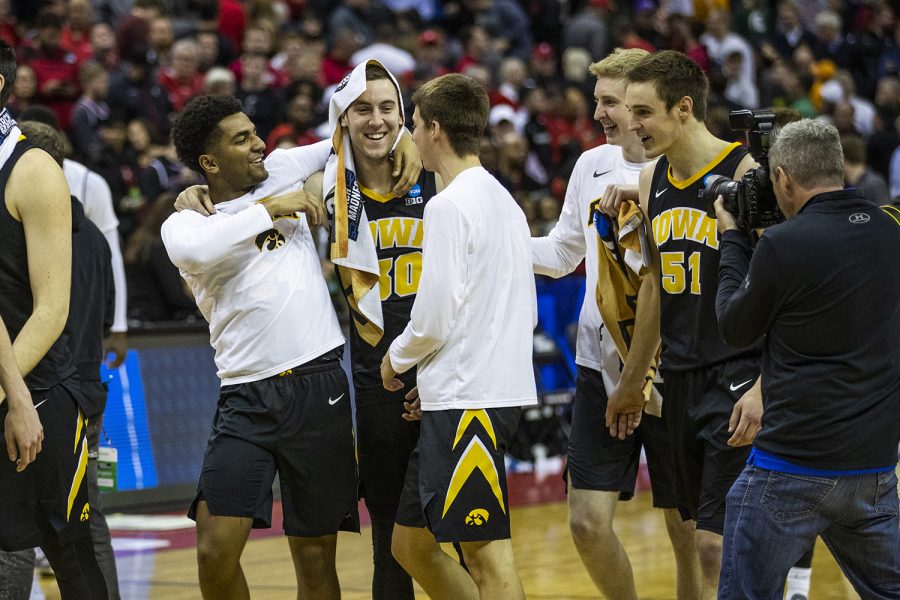 Iowa guard Connor McCaffery celebrates the win with his teammates during the NCAA game against Cincinnati at Nationwide Arena on Friday March 22, 2019. The Hawkeyes defeated the Bearcats 79-72. (Katina Zentz/The Daily Iowan)

COLUMBUS, Ohio – Iowa point guard Connor McCaffery only played 10 minutes in the 79-72 win over Cincinnati, but he was one of the team’s most effective players on the court.

One of just five Hawkeyes to record a positive plus/minus in the box score, McCaffery scored 3 points and assisted on a pair of baskets.

But if you were to check on McCaffery before the game, you might not have guessed he’d even play. The redshirt sophomore was sick right up until coming out with the team for layup drills minutes from tipoff.

“We put an IV in him before the game. He was throwing up,” Iowa head coach Fran McCaffery said. “Come out and hit a huge 3, had a couple assists in the second half. Was able to give Jordan Bohannon a little rest.”

After redshirting his freshman season due to an array of health concerns, Connor McCaffery has proven to be a vital piece in the Hawkeye puzzle. This season, he’s averaging 4.5 points and 3 assists per game.

10-seed Iowa will take on 2-seed Tennessee on March 24 in Columbus, Ohio, in the NCAA Tournament’s round of 32.