Iowa can't afford another two-shot performance out of Jordan Bohannon if it wants to keep its season alive. 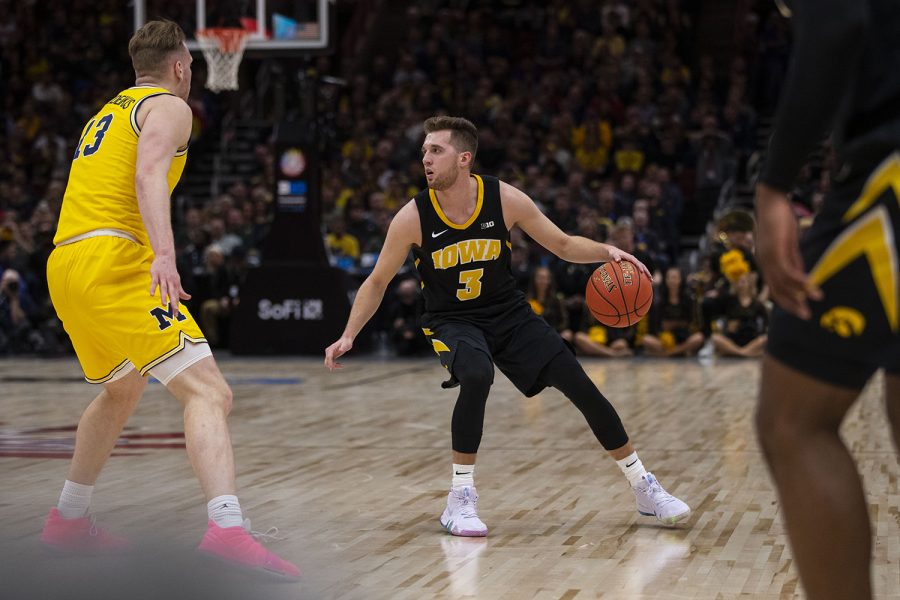 CHICAGO – Jordan Bohannon, arguably one of the best shooters in the country – let alone the Big Ten – finished with just two field goal attempts in Iowa’s 74-53 loss to Michigan on Friday.

Bohannon’s presence never made a mark in the game. Then again, neither did most of the Hawkeyes.

But the point remains: Iowa can’t survive without Bohannon.

Bohannon is Iowa’s spark; he’s proven time and time again that he’s able to single-handedly keep Iowa afloat. The Hawkeyes can’t rely solely on him for a run in the postseason, but he’s too key in their offense to take just a pair of shots.

Defense have obviously lasered in on the junior. After all, he’s the player opponents know wants (and deserves) the ball in his hands with the game on the line.

On top of that, Iowa head coach Fran McCaffery said in his postgame press conference that Iowa’s focus was to feed the post – it worked for the most part, with Tyler Cook and Luka Garza netting 52.8 percent of the Hawkeyes’ points.

“We really wanted to get the ball inside,” McCaffery said. “I thought we wanted to establish Cook and Garza early, which we did. They really pushed up on Bohannon like a lot of teams do.”

But two shots? Austin Ash took as many attempts as Bohannon did on Friday. In no alternate world is that an acceptable stat.

McCaffery said after the game that Bohannon has the green light whenever he wants to fire away.

“It wasn’t anything we went away from,” he said.

As a team, Iowa took just 16 3-point attempts, which ties for the third-fewest in a single game this season. Keeping Cook and Garza going in the paint can work, but not when for every 2-pointer Iowa hit, Michigan countered with a 3.

Iowa’s at its best when its 3-point arsenal fires on all cylinders. On five occasions this season, the Hawkeyes have made 12 or more 3-pointers. All performances resulted in wins.

Prior to the loss against Michigan, Bohannon averaged 44.2 percent shooting from 3-point range in Iowa’s 22 wins. In losses, he averaged 28.1.

A 61.9 percent isn’t terrible by any means, but Iowa is at its best when Bohannon is on his A-game.

The Hawkeyes won’t know who they’ll face or where they’ll end up in the NCAA Tournament just yet. That comes on Sunday.

I can almost guarantee that we won’t see just any more two-shot outings from Bohannon, but going forward, regardless of who Iowa draws, getting Bohannon going should be a top priority.