Breaking down Michigan’s win over Iowa

Michigan’s defense is as good as advertised, but Iowa’s offense just never got on track in the loss. 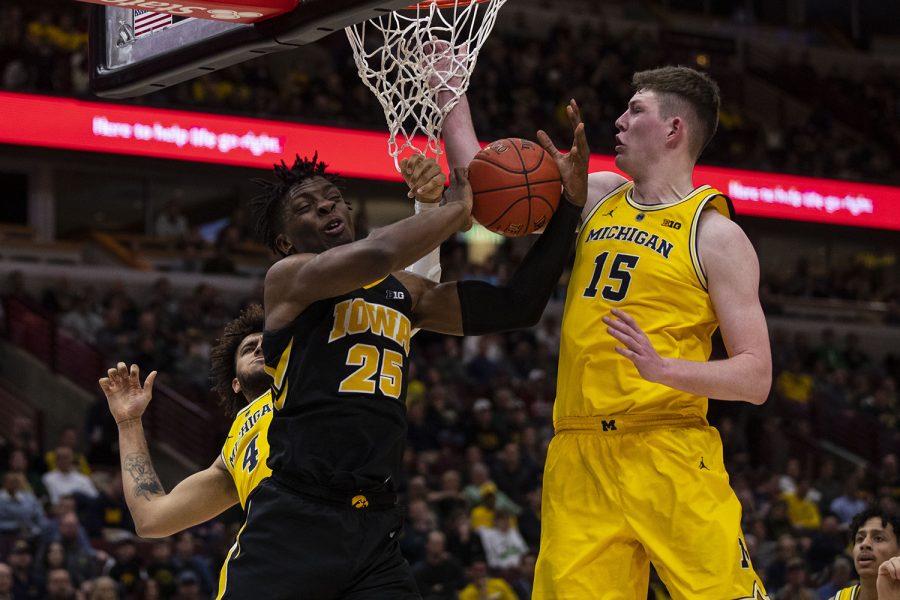 Iowa forward Tyler Cook loses control of the ball during the Iowa/Michigan Big Ten Tournament men's basketball game in the United Center in Chicago on Friday, March 15, 2019. The Wolverines defeated the Hawkeyes, 74-53.

Against Michigan, both players had the same amount of field goal attempts: 2.

In two games against Michigan this season, Bohannon has scored 8 points total. He’s 2-for-8 shooting as well.

After Friday’s loss, Bohannon said there really wasn’t anything different Michigan did in the two teams’ previous matchup that surprised the Hawkeyes.

“Same defensive principles. Nothing really caught us off guard,” Bohannon said. “We just didn’t make shots and we didn’t get stops – that’s what it came down to.”

With the starters on the bench, head coach Fran McCaffery cleaned house, throwing in Ash, Nicholas Hobbs, Riley Till, and Michael Baer into the game as the minutes winded down.

Hobbs nailed Iowa’s lone triple of the game at the 1:08 mark.

The Hawkeye starters combined to go 0-for-8 from 3-point range.

As for any matching on the hardwood, fans raining in their boos and disagreements with the officiating, but the jeers were even louder when the Hawkeyes hit the locker rooms at halftime having shot just one attempt from the free throw line.

That changed quickly in the second half, as Michigan committed five fouls, four of which were shooting, in the game’s first 2:09.

Ignas Brazeikis led the charge with 15 points, but it was a five-headed attack that kept Michigan two steps of Iowa, especially in the second half.

Those five combined to score 82.4 percent of the Wolverines’ point total. At the same time, Michigan’s starters outscored Iowa’s, 53-29.

Iowa’s 53 points were the second-fewest in a single game this season.

Iowa’s 45-point effort against Ohio State takes the cake as the worst scoring performance of the 2018-19 season, but Friday’s loss follows in similar fashion.

Iowa has scored less than 65 points twice this season – both losses – and both occasions have come in the past four games.

The best plus/minus rating from Iowa was +3.

Ash, Till, Hobbs, Baer, and Maishe Dailey all finished with a box score plus/minus of +3. Those five players happened to be the only Hawkeyes in the positive end in that statistical category.