After a dominating win against Illinois, Iowa is ready for another clash with Michigan. 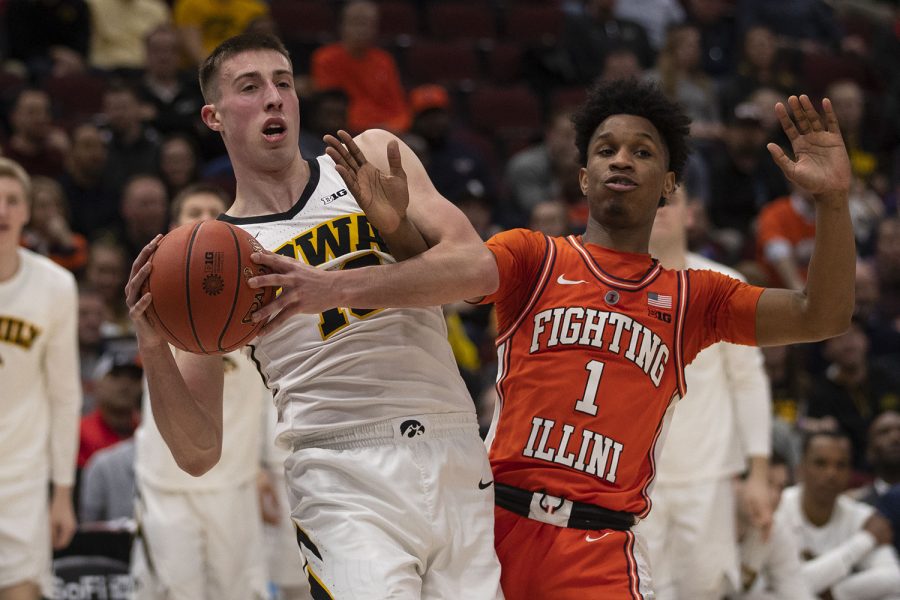 Iowa guard Joe Wieskamp and Illinois guard Trent Frazier fight for control of the ball during the Iowa/Illinois Big Ten Tournament men's basketball game in the United Center in Chicago on Thursday, March 14, 2019. The Hawkeyes defeated the Fighting Illini, 83-62.

CHCIAGO – A lot has happened since Feb. 1.

Then, Iowa (17-5 at the time) toppled No. 5 Michigan, 74-59. It was a game that felt even more dominant than a 15-point win, as the Hawkeyes controlled the game from the opening tip.

After the Michigan win, however, Iowa’s mountaintop high faded. The Hawkeyes closed out the regular season losing five out of their final nine contests. Two of the final three losses came to teams with records below .500.

But, it’s tournament time, and that means Iowa has a clean slate.

“Everybody is 0-0,” point guard Connor McCaffery said. “Every night, even. [Friday] night, we’re 0-0. Win, and move on. If not, we’ll be watching the rest of the tournament from the ride home. That’s what it is. That’s tournament basketball. Love it or hate it, but we love it.”

The Hawkeyes seemed to flush whatever regular-season bugs in their system, taking down Illinois, 83-62, in the Big Ten Tournament.

The prize? A rematch with Michigan.

Iowa doesn’t have much time to prepare, though, as the Hawkeyes have less than 24 hours from the final buzzer against Illinois to the opening tip against Michigan.

In front of a national audience, Iowa proved it has the recipe to take down any of the league’s top programs in beatdown fashion. The Hawkeyes doubled the Wolverines’ production in the paint – 40 points compared to Michigan’s 20 – and their bench outscored Michigan’s 24-3.

One of the reasons the paint opened up was due to the absence of Michigan’s Jon Teske. He found himself in foul trouble for most of the night before fouling out in the second half.

Teske leads the Wolverines with a +8.3 defensive plus/minus, which ranks 10th-best in the country. With him off the court, the Hawkeye big men put in work. Luka Garza scored a team-high 19 points, and Ryan Kriener added 15 off the bench.

But the Hawkeyes did more than limit Teske. They also contained Charles Matthews, who finished with 6 points on 2-for-12 shooting. Matthews’ status for Friday’s showdown isn’t official, as he’s missed the last three games with an ankle injury, but John Beilein told The Detroit News that “he’s going to be ready to play.”

Michigan could use Matthews back in the lineup, as the Wolverines lost their final game of the regular season to Michigan State, 75-63.