Apartments all across the country are being built with expediency and cost-effectiveness in mind, not necessarily the safety (or aesthetic) concerns of those who are going to be living in them. 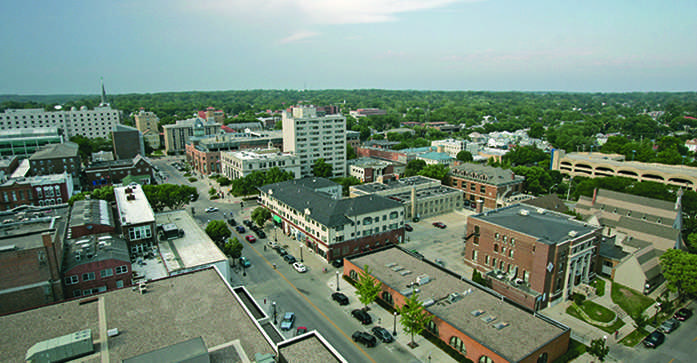 The skyline of Iowa City is seen.

Justin Fox recently published an interesting project in Bloomberg titled, “Why America’s New Apartment Buildings All Look the Same.” The article detailed the types of construction popular throughout the United States, which seems to prominently be “balloon-framing.” Balloon-framing is the use of “thin, precut wooden boards” nailed together in construction that is much faster and efficient than other types of more detailed construction. It is wildly popular in the U.S. and Canada.

Alongside the information on construction and the analysis of its effects in the U.S., there is an interesting visual component to the essay: just over a dozen photographs detailing various Texas mid-rises, the same type you can see if you look around in Iowa City, which rarely strays from its “cheap stick framing” and similar design motifs.

On a merely aesthetic level, there is an immediate disconnect between these artificial and mass-produced buildings and the people who inhabit them. A home is difficult to create in a place in which you know dozens upon dozens of other people live in identical boxes. Maybe this is an inevitable side of the commercial apartment search, but turning the apartment search into a walk through a suburban neighborhood, where no building differentiates itself, is a stressful endeavor. Our ticky-tacky homes are all the same, except unlike a nice three-bedroom slice of suburban paradise, we have a disgruntled landlord to deal with, too.

RELATED: Shaw: Should we pay for information?

On March 5, a fire tore through the Hieronymus Square construction site. Its cause was not because of wood-framing or stick construction, but the fire brings to mind the dangers that people face in unsafe construction sites. The fire spread through the wood structure incredibly quickly after it was started by a propane-fueled heater. It is unclear as to how much of the construction is in a state wherein it can be reassessed and continued.

The dangers of stick-framing were further extrapolated in the Fox piece. He cited the Great Chicago Fire of 1871, which was devastating because of the wood-framing used throughout thousands of buildings. This type of construction is dangerous if it comes into contact with situations such as a large fire. That it is so prevalent in construction across the country, and in Iowa City, is a cause for concern.

RELATED: Neal: Will a hashtag make the UI love us?

The economic interests in promoting this type of building are what largely makes balloon-framing so popular. It is cheaper and requires less skilled labor for fewer periods of time. But is that necessarily something that is good for people living in these buildings? The codes set to ensure the public’s safety are also largely in favor of construction companies; the city wants buildings up to increase the total population and revenue.

This isn’t an easily fixed situation, especially because so many buildings across the country are constructed like this. But it is something to keep in mind when considering where you want to live and how that may affect your life. You don’t want to let safety concerns involved in shaky construction burst into flames.