UISG allocated funding to a new suicide-prevention program and passed a resolution in support of a $2 mental-health fee increase to fund three new positions in the University Counseling Service. 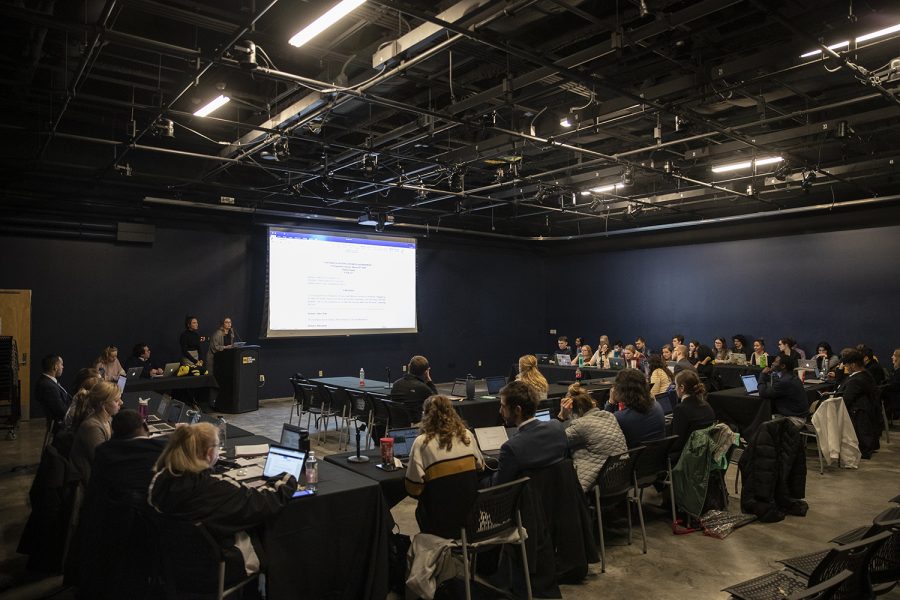 UISG discusses mental health during a meeting on Tuesday, March 12, 2019

UISG allocated $5,000 in funding to pay the integration fees for a new suicide-prevention program, Kognito, into Success at Iowa programming for first-year students. It also passed a resolution supporting a proposed $2 per semester increase in the student mental-health fee.

Both pieces of legislation passed unanimously.

Kognito is an avatar-based online suicide-prevention program. UISG funds will help cover integrating the program into MyUI and ICON web services. The rest of the program is funded through a $90,000 three-year contract with Housing & Dining, according to the legislation.

The program will appear to incoming first-year students in a trial version in May and a full version in May 2020, according to UISG Sen. Amber Crow, a sponsor of the legislation.

Kognito has been used previously as a resource at the UI but was discontinued because of a lack of grant funding, according to the legislation.

“This training can expand far past our campus community as students, faculty, and staff will have this valuable training that is transferable to others in their lives,” the legislation stated.

The $2 mental-health fee increase would fund three new positions in the University Counseling Service, Director Barry Schreier said. The service would like to add a second case manager and a liaison between the Counseling Service and the Dean of Students Office to provide support for students hospitalized for mental-health issues.

Schreier said the service needed a second case manager to help students connect to mental-health services outside of the Counseling Service.

“We’re not just giving names to students — we’re helping students make good decisions and make good connections,” Schreier said. “It is a system built on one person’s shoulders, so should a case manager decide not to be here anymore, then we lose all of our case manager services.”

Additionally, the fee increase would partially fund another staff psychologist to develop a campus-wide suicide-prevention program.

“Suicide-prevention initiatives on this campus have been pretty hit-and-miss,” Schreier said. “It was grant-funded for a while, [then the] grant dried up, and there was no more money to keep doing it. When it comes to suicide prevention for this campus — it should be consistent and sustainable.”

“UISG is working diligently with [the Counseling Service] and other campus partners to bring an additional psychologist to campus to help alleviate the need, but more importantly, help provide services to historically marginalized populations,” the legislation stated.

The proposed fee increase must be approved by UI Senior Vice President for Finance Rod Lehnertz and the state Board of Regents.

The regents initially approved the $12.50 mental-health fee in 2016 to fund eight new counselors. Student-government leaders advocated for the fee with support from university administration and regents.