While Alex Marinelli and Spencer Lee made their finals matches, Iowa's other weights fell short of their main goals. 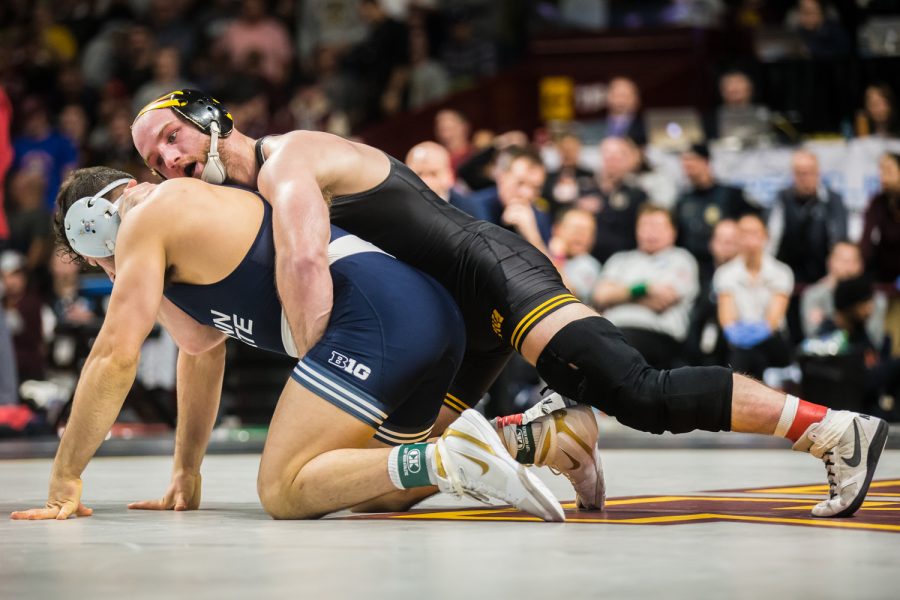 Going into the Big Ten Tournament, Alex Marinelli was seeded second, and Kaleb Young sat at fifth. Both finished higher than their seeds suggested, but Austin DeSanto and Sam Stoll moved dropped lower than their seedings.

DeSanto entered the tournament at No. 2 seed, but after a tough semifinal matchup with Rutgers’ Nick Suriano, the best the Hawkeye could do was third. Minnesota’s Ethan Lizak, similar to Suriano, avenged his regular-season loss to DeSanto, leaving the Hawkeye with no hardware.

‘[I’ve] still got nationals,” DeSanto said. “[I need to] refocus. Do the mission. Get the mission done.”

Stoll was seeded eighth to begin the tournament, but the 285-pounder didn’t see any matches on Sunday after losing two in a row — one to No. 1 Gable Steveson and then Purdue’s unseeded Jacob Aven in the consolation quarterfinals.

Stoll and Mitch Bowman are the only Hawkeyes without automatic bids to NCAAs.

Collectively, the Hawkeyes will have to perform much better if they want to finish better at the NCAAs.

One huge positive for the Hawkeyes over the weekend was Marinelli’s finals match. Not only did he become Iowa’s 200th individual Big Ten champion, he dominated the No. 1 wrestler at 165.

The highlight of the match came when Marinelli recorded a 6-point move with a takedown followed by a 4-point near-fall.  The Hawkeye won by decision, 9-3, only allowing Joseph escape points.

“I beat the No. 1 guy in the country,” Marinelli said. “That’s pretty impressive, so [this gives me] a lot of confidence. [I] can’t let it get to my head, got to stay the course, listen to the coaches on what they tell me to do.”

Iowa’s 165-pounder has an undefeated record heading into nationals.

RELATED: Hawkeye wrestling finds areas to improve on for NCAAs

Last year, Lee lost a heartbreaker to Ohio State’s Nathan Tomasello in the 2018 Big Ten semifinals despite beating him earlier in the season. He defeated Northwestern’s Sebastian Rivera in the consolation bracket, then won the third-place match.

Lee faced Minnesota’s Sean Russell in the semis this year and kept him scoreless, winning 8-0, securing a better finish than last season.

“I think [my favorite part] is just being at the Big Ten Tournament again,” Lee said after his semifinal match. “Last year, I lost in this round, so this was a big round for me mentally. Hanging with the team today was fun a lot of fun today; a lot of disappointment, but I’m looking forward to cheering them on, and hopefully, they can continue with me to the next step of our journey.”

Although Lee couldn’t upset top-seeded Rivera in the championship bout, he did better than last season. After finishing third at Big Tens in 2018, he ended up winning a national title. Again, he still has the NCAAs to reclaim his title of national champion.