Tania Davis fought through two years of adversity on her way to becoming a Big Ten champion. 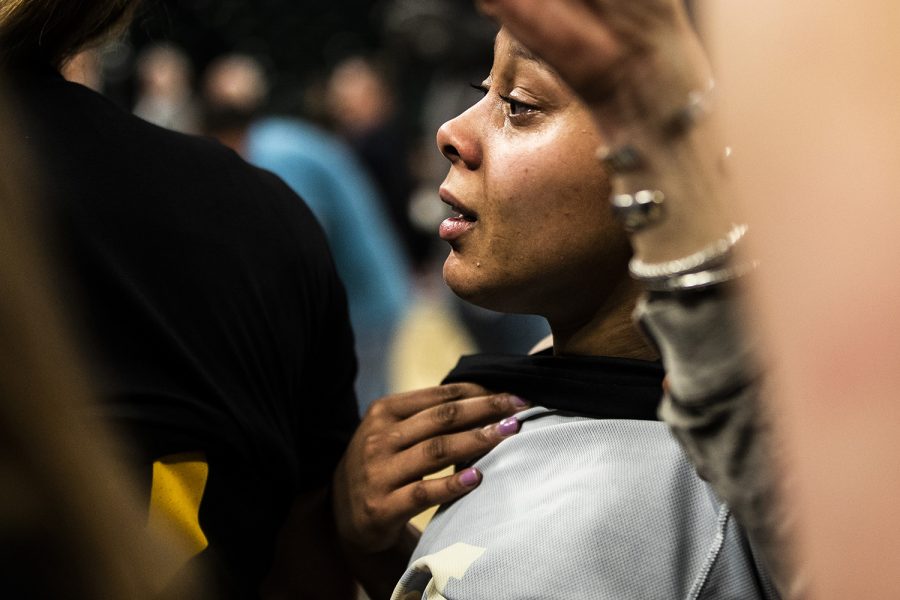 Iowa guard Tania Davis gets emotional after winning the championship title during the women's Big Ten Championship basketball game vs. Maryland at Bankers Life Fieldhouse on Sunday, March 10, 2019. The Hawkeyes defeated the Terrapins 90-76 and are the Big Ten champions.

Tears of joy flowed down the faces of the Iowa women’s basketball players Sunday night after they defeated No. 9 Maryland in the Big Ten title game, 90-76.

It was a surreal moment for all the Hawkeye women, but it was even more so for senior Tania Davis, who spent the better part of the past two seasons on the bench with two separate torn ACLs.

All the emotion from a roller coaster of a four-year career at Iowa came tumbling out as she shared a tear-filled embrace with her family after the game.

“It feels amazing.” Davis said. “Just thinking about everything I’ve been through — this is very emotional for me. I fought so hard to get back to this point, and it’s always been a dream of mine to cut down these nets. It’s just amazing.”

While her even being able to take the court again after two-consecutive ACL injuries is a great accomplishment, what makes Davis’ story more impressive is she came back even better than she left.

Davis’ efficient 3-point shooting was evident in the Big Ten Tournament when the Hawkeyes needed it most.

She was 3-of-4 with 19 points in the fourth quarters of Iowa’s three games in the tournament, and while that’s not a record number of 3s, all of her fourth-quarter buckets from deep came a crucial times for the Hawkeyes.

“She’s got ice in her veins,” forward Hannah Stewart said. “She knows that it’s not her job to score a bunch of points, but she’ll hit those shots when they need to be hit, and she’ll take what’s given to her.”

Timely shots are the way Davis helps her team on the court, but her most crucial role on this team is the leadership she shows off it.

RELATED: Zuniga: Gustafson has her best game on the biggest stage

“These guys have so much faith in what [Davis is] saying to them and how she’s bringing them together,” head coach Lisa Bluder said. “And she’s very good at that. She’s very calm, and when she talks, you just believe her.”

It’s not a coincidence that she has become the team’s leader on and off the court this season, because when injuries prevented her from dribbling a basketball, she instead focused on becoming the team leader she is today.

“She was a leader while she was not playing, too,” forward Megan Gustafson said. “[Davis] was kind of like that coach on the sidelines, cheering us on and helping us with whatever we needed. I think that helped her develop as a player.”

The Hawkeyes will need Davis’ play and leadership again in the upcoming NCAA Tournament. A No. 2 seed in the NCAA’s last top-16 prediction, Iowa’s seed will be announced on March 18.