With the Big Ten tournament set in stone, The Daily Iowan analyzes the field. 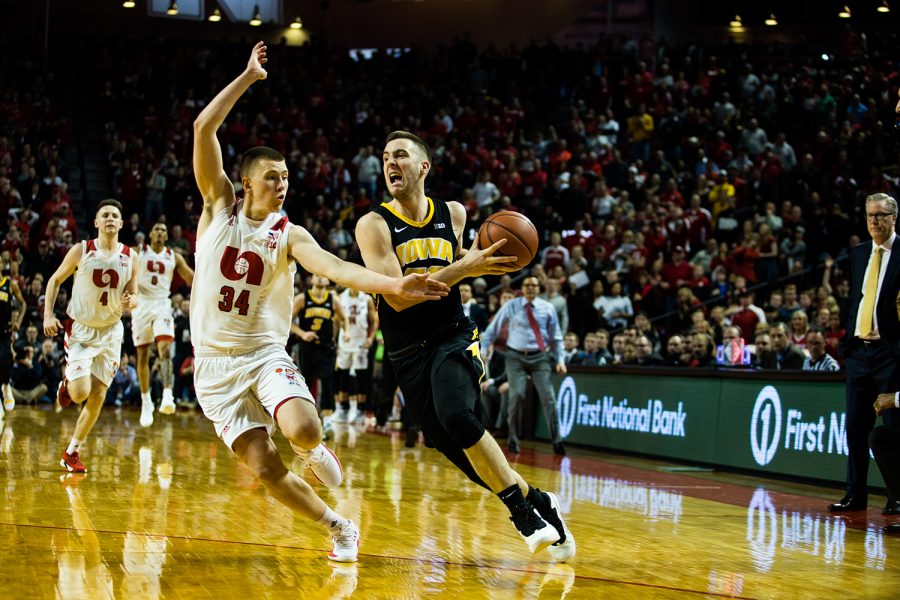 Iowa Guard Conner McCaffery #30 dribbles down the court during a mens basketball game between the Iowa Hawkeyes and the Nebraska Huskers at Pinnacle Bank Arena on Sunday, March 10, 2019. The Hawkeyes fell in overtime to the Huskers, 93-91.

On Sunday, the Big Ten released its official conference tournament seedings and pairings.

With just a few days remaining until postseason play tips off, how does the bracket shake up?

The Spartans had their fair share of injuries, specifically Nick Ward. The forward averaged 15.1 points, 6.7 rebounds, and 1.4 blocks per game, but he hasn’t seen playing time since he fractured his hand on Feb. 17 against Ohio State. Head coach Tom Izzo said he’s confident Ward will be ready to go in the Big Ten Tournament — a major plus for Michigan State.

With Ward back, Michigan State has the best shot at heading to the finale — the Spartans are 8-2 against teams in their half of the bracket. Their only two losses came against Indiana, and while the Hoosiers have late-season momentum, a third upset over Sparty would be hard to accomplish.

To top it off, Michigan State is just one of two teams in the Big Ten to have won seven out of its last eight games in the regular season.

As much as Iowa fans might have something to say in this argument, Northwestern is the coldest team heading into the Big Ten Tournament. The Wildcats have lost 11 of their last 12 en route to a Big Ten worst 4-16 conference record.

However, the Wildcats have struggled with opponents in their half of the bracket, finishing 1-8 against the likes of Illinois, Penn State, Minnesota, Iowa, Michigan, and Purdue.

It’s all about how you finish, and Indiana might just be the hottest team in the Big Ten heading into the tournament. Winners of four in a row, including a pair of games against top-20 teams, the Hoosiers have had the wind at their backs recently.

Indiana has the talent to hang with any team in the Big Ten. Juwan Morgan, the reigning Big Ten Co-Player of the Week, has averaged 22.5 points and 8 rebounds in his last two games.

Throw in Romeo Langford for kicks, too. He’s a potential NBA lottery pick in the April draft who averaged 16.7 points, 5.4 rebounds, and 2.3 assist per game. If he and Morgan play at their best, Indiana can knock off any team in the tournament.

Edwards was the one Big Ten player who averaged better than 20 points in the regular season, and there’s no reason to believe his tremendous senior season doesn’t continue into the postseason.

The guard averaged 23.4 points on 38.9 percent shooting this season. He’s the only player in the conference with more than 100 makes from 3-point range (106).

Last season, Purdue advanced to the conference championship thanks to Edwards’ heroics. He averaged 21.7 points in three games, scoring 26 and 27 prior to the final game.

Entering this postseason, Edwards scored 21 points or more in the final four games of the season — a hot streak that he’ll likely continue.