Max Murin placed seventh in his first Big Ten Championships and secured an automatic big to the NCAA Championships. 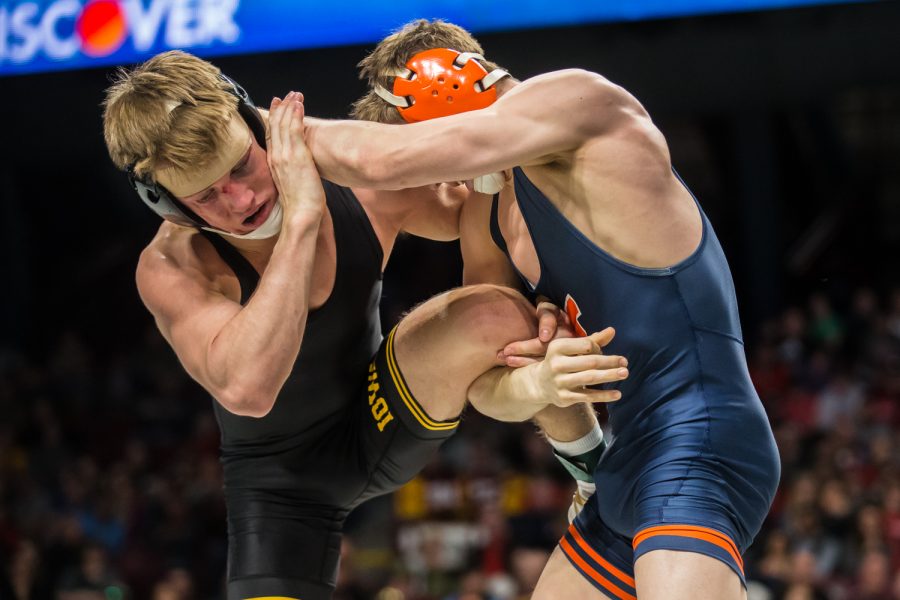 With seven wrestlers in consolation matches to begin Session 3 of the Big Ten Championships,  Iowa had to look forward to the next best thing during Day 2.

The Hawkeyes won four of their five consolation semifinal matches with victories from Austin DeSanto, Pat Lugo, Kaleb Young, and Jacob Warner. Cash Wilcke will wrestle for fifth in Session 4, and Mitch Bowman won his ninth-place semifinal before getting pinned in his next match to place tenth.

Max Murin, Iowa’s last Hawkeye in the consolation bracket, was unable to find himself a spot in a semifinal match after his loss to Minnesota’s Mitch McKee March 9. So his “next best thing” was a seventh-place finish.

Iowa’s 141-pounder faced top-seed Michael Carr of Illinois in the seventh-place match. When the two faced earlier this season in Champaign, Carr beat Murin with the help of a last-second takedown, 6-3.

Murin turned the tables today, finding himself on top after a takedown with 19 seconds to go, winning 3-1.

“I didn’t come here to get seventh place,” Murin said. “I wanted to win it, I want to win at any tournament I go to. But when you lose, you’ve got to get the next big thing. Again, that didn’t work out for me. I lost in the consolations, so I was going for seventh. I came in today and I was saying I need to win this for the team and get a better seed at nationals. It’s always looking forward to get the next best thing.”

Whether Murin placed seventh or eighth, he had already secured an automatic bid to his first NCAA Championships. The Ebensburg, Pennsylvania, native will return to his home state for the biggest tournament of the season.

“I’m really excited,” Murin said. “I think half the arena is probably going to be my family and friends. I think there’s a lot of them going. It’s going to be a good experience, especially for my first one.”