As Session 1 of the Big Ten Championships comes to an end, Iowa has yet to have an individual tally two wins but will send four to the semifinals. 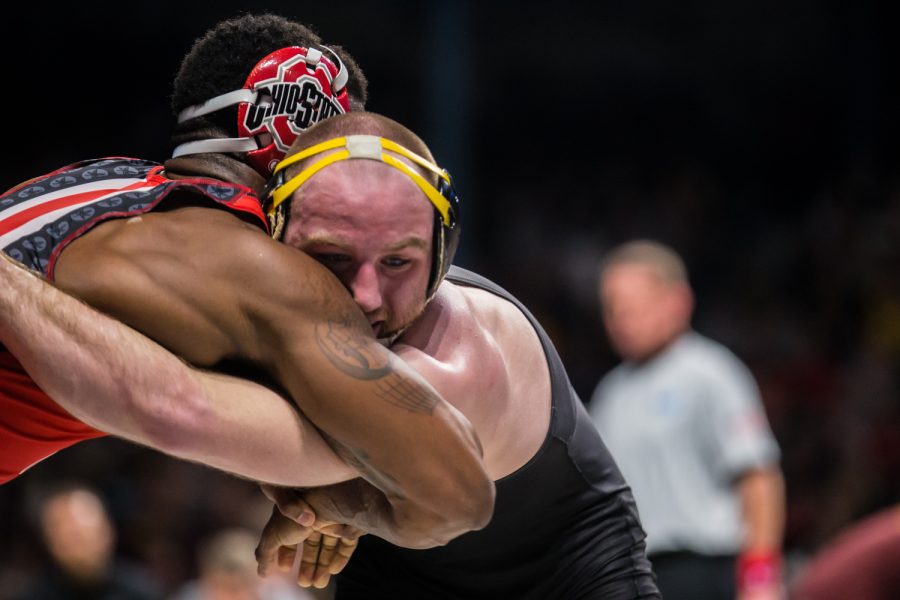 Minneapolis – As the Big Ten Championships began, Iowa had four wrestlers – Spencer Lee, Austin DeSanto, Alex Marinelli, and Jacob Warner – with byes in the first round.

In the quarterfinals, Lee pinned Indiana’s Elijah Oliver, but the other three wrestlers would only win on decisions.

“We won some tough matches and maybe left some bonus points out there,” Iowa head coach Tom Brands said. “Points are hard to come by and we need to make them easier.”

These four wrestlers will be the only Hawkeyes in the semifinals this evening as Iowa has yet to have a wrestler string together back-to-back wins.

174-pounder Mitch Bowman fell to Wisconsin’s Ryan Christensen, 3-2, in the first round, but Iowa’s five other wrestlers without byes found themselves spots in the quarterfinals.

This success didn’t carry over, though, as Max Murin, Pat Lugo, Kaleb Young, Cash Wilcke, and Sam Stoll all lost and are now in the wrestlebacks.

Despite these losses, hope for Iowa to still do well in the team standings or wrestleback for third place isn’t completely gone. These five wrestlers only lost their quarterfinal matches by a total difference of 11 points.

“They have to be [ready to move forward] and if they’re not now, their realization will set in, not speaking for them,” Brands said. “We have good guys that are looking forward to the next step after this as well, but one match at a time at this tournament. There’s more wrestling to do so these guys aren’t giving up.”

As far as putting together some wins on the Championship Bracket side, Lee should be able to do so at 125 as he faces Minnesota’s Sean Russell.

Russell has already tallied two major decisions today, but when the two met up during the regular season, Lee kept Russell scoreless, winning 4-0.

At 133, DeSanto will wrestle Nick Suriano.

Suriano pinned his first opponent today, but a more impressive win from the Scarlet Knight came in the quarterfinals over Ethan Lizak as Suriano made his 9-2 win look easy over the Gopher. On Jan. 18, DeSanto defeated Suriano on a last-second takedown at home, winning 6-4. DeSanto will have his hands full attempting his second win over Suriano this season.

Marinelli already has two wins over his semifinal opponent this season, topping Evan Wick of Wisconsin, 4-3 and 6-4 in sudden victory.

Similar to Suriano, Wick also pinned his first opponent of the tournament and would go on to defeat Bryce Martin, 6-1, in the quarterfinals.

To get his second win of the tournament, Warner will get a shot at Ohio State’s Kollin Moore, who he has yet to see this season. The 197-pound No. 2 seed currently holds a record of 18-2 and has tallied two major decisions so far this season.

A round of consolation matches where the Hawkeyes will get a chance to string some wins together will begin and 6 p.m. followed by the semifinals.