Hawkeye tennis looks for production from No. 1 players in weekend matches

The Iowa men’s and women’s tennis teams head into the weekend trying to erase their losing streaks. 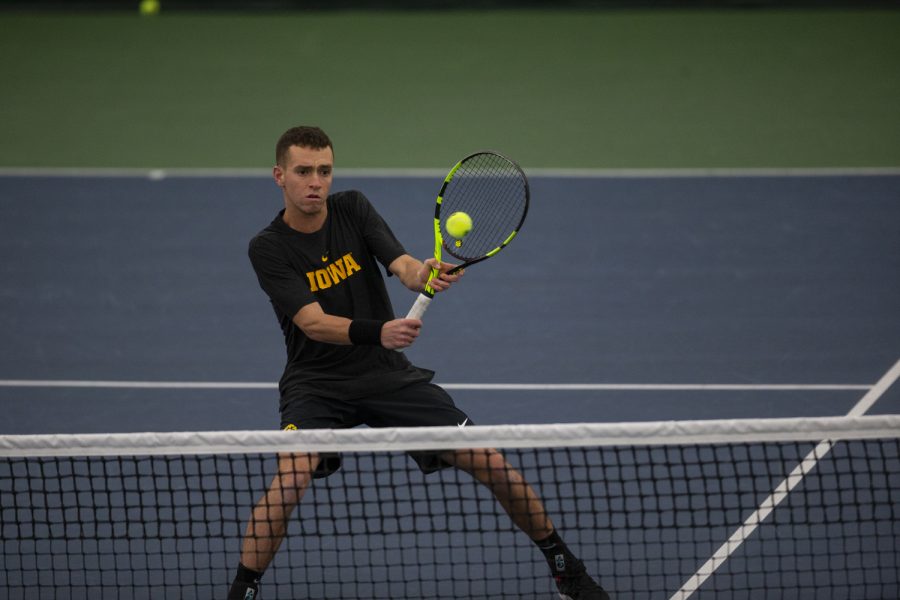 Kareem Allaf volleys the ball during the men's tennis match against University of Miami at the Hawkeye Tennis and Recreation Complex on Feb. 8, 2019. Allaf and his partner Jonas Larsen lost their doubles match 6-4. Miami defeated Iowa 4-1.

Both Iowa tennis teams will head into the weekend with a focus on getting ahead early.

The men’s team enters on its first losing streak of the season. The Hawks have recently lost to both Cornell and Texas Tech, putting their record 8-3.

Now, it comes back home after a two-game road skid to host Drake on March 8 before hitting the road again to face Nebraska on March 10.

If the Hawkeyes are going to get back to their winnings ways, they are going to need to do two things: win the doubles point and come out on top at the No. 1 position.

Iowa has dropped the doubles point in all three of its losses this season including its past two road matches.

“I think the doubles point for us this season is always going to be important for us to get up 1-0, especially on the road,” Iowa head coach Ross Wilson said. “You know then you only have to split the three singles matches.”

But there’s a problem. Kareem Allaf has struggled at the No. 1 spot recently.

He started the season 5-3 at the first position before dropping his last two matches on the road in straight sets. However, if he wins in singles this weekend, he has another shot of cracking the top-15 all-time wins list for singles in Iowa tennis.

“I just have to focus in practice and keep doing what I’m doing, and hopefully, I can see myself in the top five in the leaderboards,” Allaf said.

It’s the same story for the women’s team. Iowa has dropped its last three matches, losing the doubles point in two of them.

“Our road trip to Florida for the next three matches will be a great stretch for us,” Iowa head coach Sasha Schmid said. “Most importantly, our team wants to get back out and compete.  In addition, we will gain valuable outdoor tennis experience and play three tough teams who will push and challenge us in every match.”

It will also be a key when Iowa heads to Florida to face Furman, Florida Gulf Coast, and Notre Dame.

In order for the women’s team to get back on another hot streak, it is going to need freshman Samantha Mannix to get back to winning at No. 1.

Mannix started the season on a roll, winning four of her first five matches as a Hawkeye. She was a big reason Iowa started off 7-0 in its first seven dual matches of the season.

“I think we definitely put a challenge in front of her putting her at the No. 1 position for doubles and singles,” Schmid said. “I think she’s really growing and playing with a lot of confidence. She understands that every single match is really, really difficult at that spot.”

Mannix has been struggling recently. Her last singles win came on Feb. 9 against DePaul, and she has lost her last four matches at the No. 1 position.

She has been instrumental in the Hawkeyes’ wins, but her losses have not helped. If Iowa wants to get back in the victory column this weekend, she has to get back to winning.