After a solid start to the spring, Iowa will try to extend its winning streak. 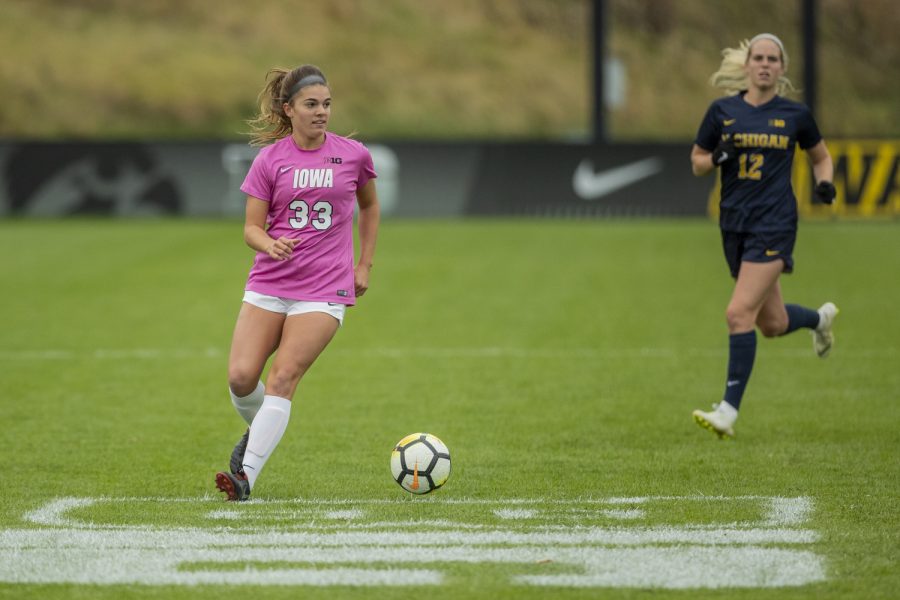 Iowa defender Riley Burns prepares to cross the ball during Iowa's game against Michigan at The Hawkeye Soccer Complex on Sunday, October 14, 2018. The Hawkeyes defeated the Wolverines 1-0.

The Iowa soccer squad opened its spring season with two wins at home on March 2. This weekend, the Hawkeyes will head to Ames on March 10 to play Drake and Iowa State.

Last weekend, the Hawkeyes avenged their 3-1 regular season loss to Minnesota, the Big Ten champions, defeating the Gophers, 4-1. Devin Burns recorded a hat trick for the Hawkeyes, and Natalie Winters put away a penalty shot.

Iowa also tallied a win over Western Illinois, winning 7-0 behind a hat trick from Emma Tokyuama.

“The Minnesota game, I thought was the best we have been defensively in my entire time at Iowa,” head coach Dave DiIanni said in a release. “Our mentality, shape, and tactically, they were very prepared and were difficult physically throughout the game. I was really impressed with the mentality defensively. Everything we did in training was reflected in the game, and it was consistent for 90 minutes. We played with no subs in that group, and it showed that our fitness level is well ahead of where it should be at this time.”

Iowa did not play Drake during the regular season, but it did face the Cyclones on Sept. 7, 2018.

Going into halftime of the matchup, the Hawkeyes were down 2-0. Kaleigh Raus scored 37 seconds after the second-half whistle blew, but despite outshooting Iowa State, 10-4, in the second half, the Hawkeyes couldn’t score the equalizer.