Spencer Lee was pinned for the first time in his college career on Feb. 24. But he's ready to bounce back. 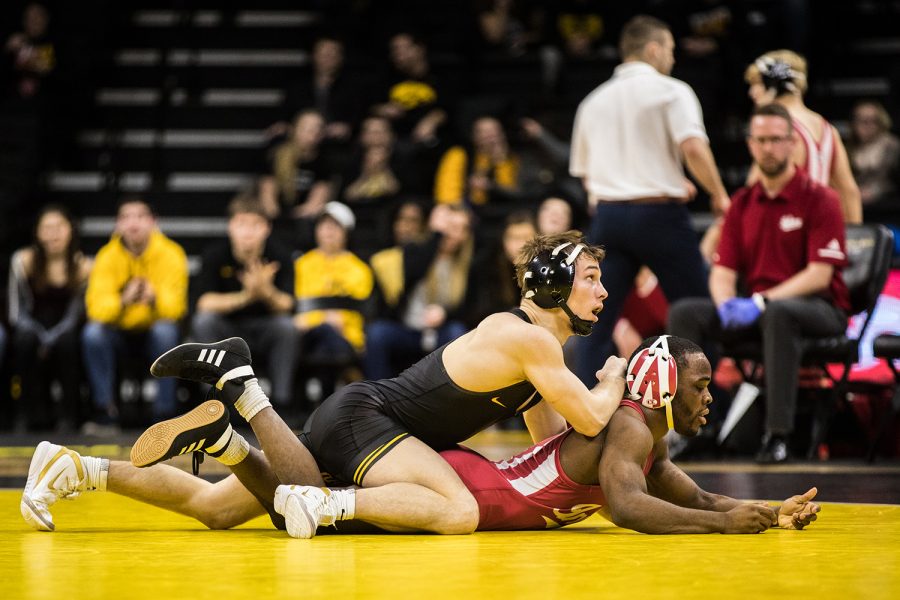 After Oklahoma State’s Nick Piccininni pinned Iowa’s No. 2 Spencer Lee in the final seconds of the second period in their matchup on Feb. 24, wrestling social media lit up.

Fans were shocked by Piccininni’s upset over the 2018 125-pound national champion. Lee was shocked, too.

“It’s just like every other loss — it sucks,” Lee said. “It’s going to hit you hard. I was more shocked than anything after the match just because that’s never happened to me before really, one time. But I was just getting ready to move on, and the coaching staff was telling me to keep a positive mindset and get ready for practice on Monday and Tuesday.”

The 125-pounder has only been pinned twice in his wrestling career — the last time, he was in elementary school.

“The last time I was pinned, I think I was 9 in the state finals, 9 or 10,” Lee said. “So [after the match], the coaches were on me about staying in good position and wrestling the whole match hard. For me, it was just getting back to myself and getting ready for the postseason.”

Following the match, media reported on speculation that Lee was hurt, but head coach Tom Brands cleared these rumors up, describing Lee’s state as “typical of a high-level competitor that’s getting ready to go to the next step, which is a very important step, and he’s going to make it right.”

As far as his experience with all the social-media attention he’s gotten this season, Lee chooses to stay away from it as much as possible because with everything he wants to accomplish, he must focus only on the positive energy.

“I haven’t really been on social media very much in the last two months just because, well, there’s a lot of positivity in social media, but there’s been a lot of negativity to it for me this year,” Lee said. “Right now, I’m not really worried about that. I’m worried about the next big thing, and that’s this weekend and getting ready for the Big Ten Championships.”

Earlier this season, Lee fell by decision to Northwestern’s Sebastian Rivera in the Midlands Championship, his only other loss. With the Big Ten Championships at hand, Lee will likely get a second shot at Rivera this weekend, and he believes he has more to offer than he has shown.

“I feel like I’m a pretty diverse wrestler, and I can do a lot of different things that maybe I haven’t shown yet, to be completely honest,” Lee said. “I think that’s just wrestling with more confidence and believing in my coaching staff and how they believe in me. I’ve just got to go out there, relax, and wrestle.”

So, with the rumors all cleared up, let it be known that Lee will be ready to go this weekend in Minneapolis.