Iowa defensive line coach Reese Morgan will hang up the whistle after 19 years with the Hawkeyes. 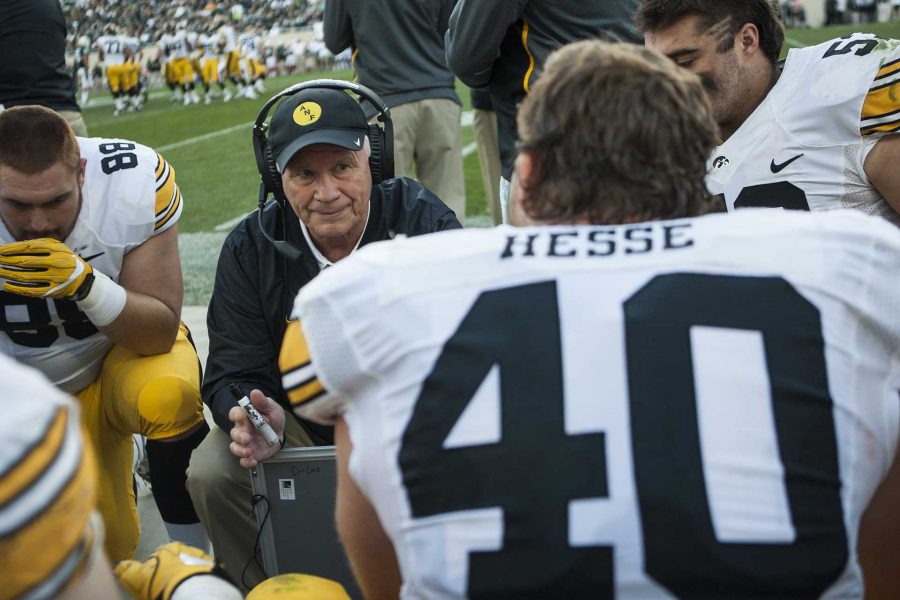 Iowa defensive line coach Reese Morgan talks with the Iowa defense during the game between Iowa and Michigan State at Spartan Stadium on Saturday, Sept. 30, 2017. The Hawkeyes fell to the Spartans with a final score of 10-17. (Ben Smith/The Daily Iowan)

Morgan will leave the program before spring practice begins.

“Coach Ferentz took a chance on me and I have nothing but appreciation and gratitude for the opportunity to be part of this wonderful Hawkeye program – it’s been an amazing experience,” Morgan said in a release. “I’ve always felt that we learn as much from our players as they learn from us. They teach us lessons that go beyond football. And when a player arrives lacking a little maturity and confidence but leaves as a young man prepared to tackle life, that’s the real reward for me.”

Kelvin Bell, who currently serves as the recruiting coordinator, has assisted Morgan with the defensive line for the past three seasons and will take on the interim defensive line coach role during spring practice.

Morgan cited his family as a reason for his retirement at this point and said he didn’t want to take away from anything the program held recently such as Junior Day.

Morgan has held three different positions under Ferentz at Iowa. He coached tight ends and served as the recruiting coordinator from 2000-02 before becoming the offensive line coach from 2003-11. He spent the last seven seasons as Iowa’s defensive line coach.

He said he will miss recruiting trips because of the people he met and noted it wasn’t hard to sell recruits on Iowa because of Ferentz, whom he called a Hall of Fame coach.

After rising up from the high school ranks, it’s clear to see Morgan got into the coaching profession for a specific reason.

“Everyone is in this business because someone made a difference in our lives,” Morgan said. “We want to teach, help, and make a difference in the lives of other people. Every teacher and coach in America wants to do that.”

Morgan worked with seven players who went on to win first or second-team All-American honors. He has also coached 13 NFL Draft picks, including five first-rounders. Three players coached by Morgan have gone on to earn NFL All-Pro honors.

“A genuine and authentic person, Reese handled every challenge we threw his way in magnificent fashion,” Ferentz said in a release. “Every player and coach who had the opportunity to work with Reese Morgan is much better for it. It’s like losing a great player – Reese’s shoes will be hard to fill.”

Before joining the Hawkeye staff, Morgan served as the head coach at Iowa City West for eight years. Morgan, who left the program on a 26-game winning streak, led the Trojans to state titles in 1995, 1998, and 1999. He was also inducted into the Iowa High School Coach’s Hall of Fame.

“My wife, Jo, and our family have been so supportive over all these years allowing me to enjoy the sport that I love,” Morgan said in a release. “I can never thank them enough. Now it is time for me to give back to them.”