The fire at a construction site near Clinton and Burlington Streets on Tuesday was caused by a heater, officials said. 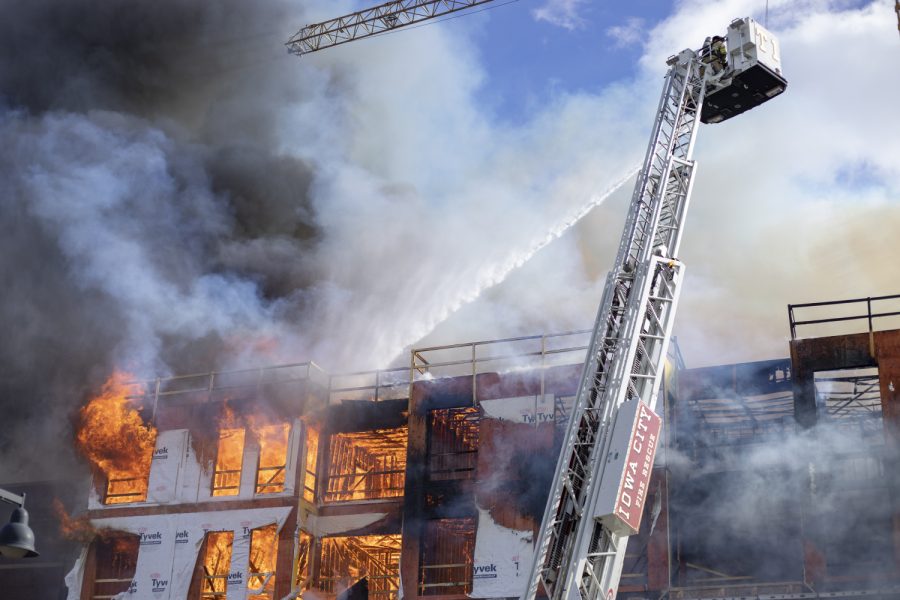 Firefighters respond to a structure fire at Burlington and Clinton on Tuesday, March 5.

The Iowa City Fire Department has determined the fire at Hieronymus Square was caused by a heater coming in contact with combustible adhesives.

The investigation into the fire, which began Tuesday afternoon near Clinton and Burlington Streets, included a physical investigation and interviews. Fire Marshall Brian Greer said the cause of the fire was determined in interviews with construction workers at the scene.

According to an email from the city of Iowa City, there was a room on the third floor of the north side of the building that housed a temporary tent structure to warm combustible subfloor adhesives, along with a propane-fueled radiant heater. Liquid propane was stored outside the tent. The heater and combustibles came into contact, which started the fire. The propane tank began to vent as flames grew and eventually exploded. Strong winds carried the flames throughout the structure quickly.

“One of the workers from Hodge Construction was actually up on the third floor in the hallway … and he smelled something [and] noticed that the tent was starting on fire,” Greer said.

He said some of the workers in the area attempted to put out the flames with fire extinguishers, but the fire grew too large to control.

Officials estimate initial losses at $1 million. The investigation is pending any additional information.

“The only thing that’s really uncertain would be the loss estimate,” he said. “There are still a lot of questions to be answered.”

Greer said there are uncertainties around whether certain parts of the building will need to be replaced, such as the third-floor flooring and the concrete in the elevator shaft around the damaged area.

The estimate is likely to change as those uncertainties are solved, he said.

“As things progress, we’ll get a more true number from either Hodge or [an insurance company],” Greer said.

The planned facility, with a roughly $40 million price tag, will be seven stories high, with two towers connected by a two-story portion on the bottom, Assistant to the City Manager Simon Andrew said.

The construction team is working on removing the damaged portions of the building and assessing the damage, Andrew said. The cleanup should be completed today.

It is unknown at this time how the fire will affect the construction timeline. The project was slated to be completed around August.

Andrew said the city is doing everything possible to support the next steps.

“Going forward they’re going to have to assess their situation and what the state of the building is,” he said.

“The damaged construction project is currently being torn down, and the immediate site being cleared,” according to the email. “Reopening the block is dependent upon upcoming weather conditions.”

Traffic will be detoured onto Dubuque, Court, and Clinton Streets while the block is closed. All other streets downtown will remain open.

Burlington Street’s partial closure is expected to affect traffic throughout the area. City officials ask that people use caution when commuting.