Jordan Bohannon led the Hawkeyes to a win with a clutch shot the last time Iowa visited Madison. He wants to do it again today. 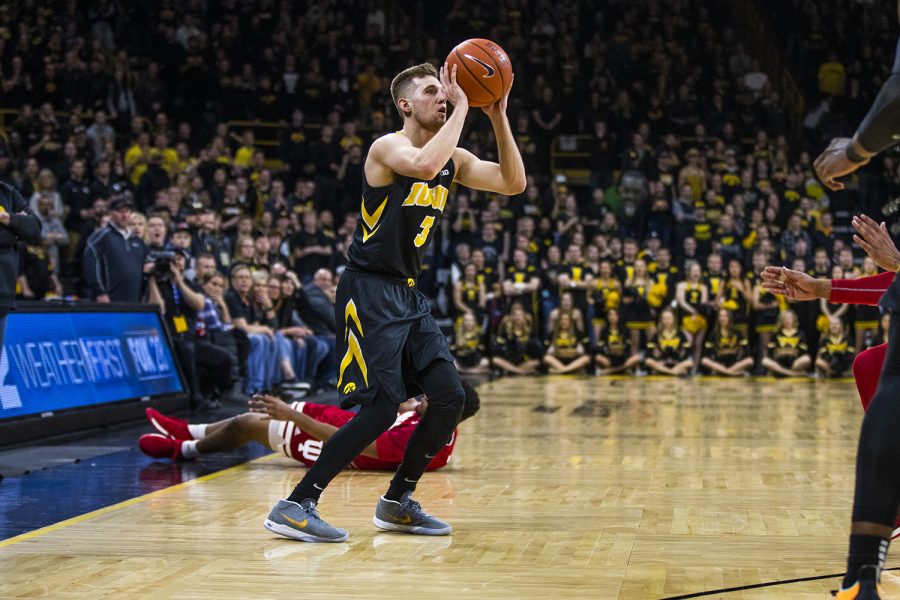 Iowa guard Jordan Bohannon prepares to shoot the ball during men's basketball vs. Indiana at Carver-Hawkeye Arena on Friday, February 22, 2019. The Hawkeyes defeated the Hoosiers 76-70.

The Kohl Center is home for Jordan Bohannon. He grew up watching his brothers, Zach and Jason Bohannon, play for Wisconsin in the arena.

But after he hit a 3-pointer with 10 seconds left after trailing by 1 in 2017, he made his own memories there, and he wants to make sure Badger fans remember.

“During warmups, I might just go to the spot I hit a game-winner,” Bohannon said. “I might not have a ball — just stand there with the form I had freshman year.

“We’re running out of games there, so you got to do something fun, right?”

Ever since Bohannon’s game-winner, there has been a certain trend in games between Iowa and Wisconsin. The Hawkeyes won one of their four Big Ten games over the Badgers last season, but Wisconsin got revenge earlier this season by picking up a 72-66 victory in Carver-Hawkeye.

While the win in 2017 was certainly an impressive one, it’s still like others that have taken place in Madison.

“Kind of similar to a lot of the games we’ve had over there,” Iowa head coach Fran McCaffery said. “They’ve been good games, very competitive atmosphere, really good. There’s always some Hawk fans over there.”

The Hawkeyes opened Big Ten play this season with the 6-point loss to the Badgers, and Iowa views it as a game that got away.

The Hawkeyes had the opportunity to win the game down the stretch after leading 61-60 with 1:36 remaining, but Wisconsin closed the contest on a 12-5 run to take the game. Iowa proceeded to start 0-3 in conference play.

The early season loss to the Badgers, combined with a two-game double-digit losing streak, provides plenty of motivation for a Hawkeye squad trying to get back on track in time for the postseason.

“For me personally, I want a little payback because we had them here,” forward Ryan Kriener said. “If the ball bounces a little differently, we win that game here. That would be another quality win that would be on our résumé. That’s extra motivation for me. I think a lot of the other guys feel the same way.”

If Iowa wants to get its revenge, it will have to handle Ethan Happ. That’s a lot easier said than done, though — he has torched the conference this season.

The Badger senior ranks fifth in the Big Ten with 17.8 points per game, third with 10.1 rebounds, and third with 4.7 assists.

Happ’s one downfall, however, is his free-throw shooting. A career 54 percent shooter from the charity stripe, he knocks down his freebies at just a 45 percent clip this season.

His lack of efficiency from the line could cause teams to hack him, but whether acting head coach Kirk Speraw chooses to do that or not, he won’t be an easy matchup.

“He’s probably the toughest guy in the Big Ten to guard for big guys because he has a little bit of an unorthodox game for a big guy,” Kriener said. “He’s constantly spinning, dribbling, such a gifted passer, a really crafty finisher … You really have to keep your wits about you when you play him.”