Pete Buttigieg’s pitch to Iowa: a Midwest millennial can win in 2020

South Bend Mayor Pete Buttigieg made a three-city stop in eastern Iowa Monday, where he said his policy experience in local government and young perspective was an asset. 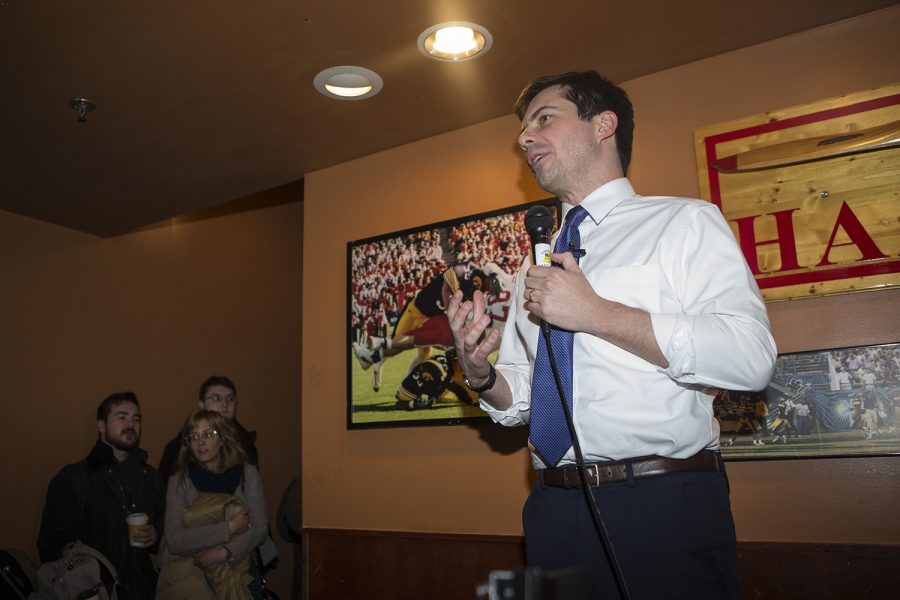 Democratic presidential-nomination candidate Pete Buttigieg, mayor of South Bend, Indiana, addresses the audience during his visit to Airliner in Iowa City on March 4, 2019.

Pete Buttigieg, 37, told eastern Iowans his Midwest background, local government experience, and his age could be key to winning the presidency in 2020.

The Mayor of South Bend, Indiana, toured Davenport, Iowa City, and Cedar Rapids on Monday in his first eastern Iowa stops since announcing his 2020 exploratory committee for president on Twitter Jan. 23.

In his opening remarks to a group of about 80 at The Airliner, Buttigieg addressed his age and missing Washington experience, saying his perspective as a millennial and leading a local governmental agency in a midwestern city gave him valuable offerings as president.

“I would argue that if we make Washington look more like our best run cities and towns rather than the other way around, this would be a better country to live in,” he said.

Elected to mayor of South Bend at 29, Buttigieg (pronounced Boot-edge-edge) is serving his eighth and final year as mayor of the city, size 102,000.

One of the youngest candidates vying for the Democratic nomination, by the date of the Iowa caucuses, February 3, 2020, Buttigieg will be 38. The federal age minimum to run for president is 35.

“Not only as a mayor, not only as a Midwesterner, but as a millennial, I believe I have something to offer in this conversation,” Buttigieg said, adding that as a millennial he will be on the “business end” of climate change and is a part of the generation of school shootings.

Buttigieg could also be the first openly gay president. One attendee became emotional when he thanked Buttigieg for running as an openly gay politician during a question-and-answer period. Buttigieg replied, telling him to “be yourself,” and explaining that it had been challenging for him to be openly gay and run for office as well as serve in the military. Buttigieg served as a Navy Lieutenant and was deployed for a seven-month stint in Afghanistan in 2014.

University of Iowa sophomore, Shayla Ides, said she thought Buttigieg did well explaining his policy ideas in an easy-to-understand way, adding she liked that he was a young candidate.

“He’s all of these unique things if he’s elected — youngest person, he’s also gay — but he also did a great comparison on health care in a town hall I went to before,” she said.

In his reply, Buttigieg said he endorsed Medicare for All, but said he would start with an opt-in system to grow participation.

“You might call it ‘Medicare for all who want it,’” Buttigieg said.

Other Democratic candidates have also pledged support for a “Medicare for All” plan including Elizabeth Warren, Kamala Harris, who endorsed a universal health-care program in a CNN town hall, Cory Booker, and Bernie Sanders, who introduced a 2017 bill proposing Medicare for All.

Tessler, who hasn’t yet decided on a candidate to caucus for, said she liked the practicality of Buttigieg’s health-care plan.

“When people talk about Medicare for All they think private insurance just won’t be available,” she said. “But individuals should have the opportunity to have accessible and affordable health insurance.”

Buttigieg also touched on his experience with declining manufacturing jobs in South Bend. He said he had to have “tough and honest” conversations as he ran for office that a similar manufacturing life line like car company Studebaker, which shuttered its doors in 1963, wouldn’t be coming back in the same way.

Instead, he said he created jobs in new areas, like in the data sector, and focused on transitioning people to new jobs.

In foreign policy, Pat Minor, who is a part of a Iowans for Palestine group in Iowa City, asked Buttigieg if he supported Palestinian rights.

“What we do with an ally, what you do with a friend, is you put your arm around them and you say how can I help get this to a different place and we have to be prepared to do that when it comes to making sure there is a world where Israelis and Palestinians are able to live in peace side by side,” he said.

Both Minor and Shayna Jaskolka, who is a freshman, Jewish-American student at the University of Iowa, said they appreciated his stance to take action on the issue.

Jaskolka said although she hadn’t decided who’d she would caucus for, she thought Buttegieg’s youth and his policy stances could propel him to the Democratic nomination.

“I think he fits a lot of categories,” she said.