The Iowa women’s basketball team had a season-high 12,051 fans in the season finale, but the student section remained bleak. 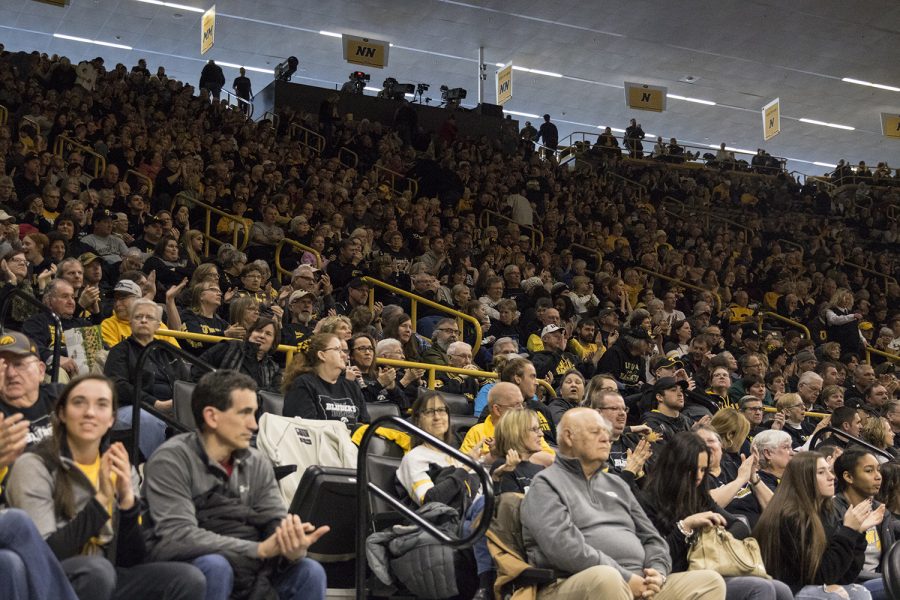 Whether the Iowa weather wants to admit it or not, March has finally come. For college basketball teams, it’s the pinnacle at the end of a long and grueling season.

That can certainly be said of the No. 12 Iowa women’s basketball team as it is coming off a 74-50 victory over Northwestern that clinched a second-place finish in the Big Ten regular season title race and a season that saw it go 23-6 (14-4 Big Ten).

Sunday’s game not only marked the final Big Ten regular season game for the Hawkeyes but was also a celebration of one of the most impactful senior classes in program history, highlighted by possibly the greatest Hawkeye basketball player in Megan Gustafson.

Iowa City showed up to support the National Player of the Year candidate and the rest of her fellow seniors, filling 12,051 of the 15,500 seats in Carver-Hawkeye arena providing for a captivating atmosphere.

“I have to thank the Hawkeye fans that came out today,” head coach Lisa Bluder said. “It was an amazing environment.”

However, there was one part of Carver-Hawkeye left notably empty: the student section.

Sunday’s game wasn’t an anomaly; it was normal. Over the course of my two seasons covering the Iowa women’s basketball team, I have never seen a student section that goes more than one and a half rows deep, and even those are rare sights.

That could be understandable for a team that loses more than it wins, but that’s not the case with this Hawkeye team.

Iowa has locked up a two-round bye for the upcoming Big Ten Tournament, and have all but secured a top-four seed in the fast-approaching NCAA Tournament.

In the women’s tournament, the top four seeds get to host the first two rounds.

That means there is likely a chance that Iowa will play the first two games of the NCAA Tournament in Carver-Hawkeye.

For those without calendars handy, that is at the tail end of spring break for students, meaning they should be returning to campus around that time.

With the tournament falling at such a favorable time for students, there is no reason why any of Iowa’s possible NCAA Tournament games shouldn’t have a student section.

Missing any team led by head coach Lisa Bluder could be considered a disappointment, but perhaps none of her teams have had more talent than this team.

Iowa’s 2018-19 team is certainly a joy to watch, and the players think it’s an experience students would enjoy

“I think if the students came out, they’d be surprised by how much fun they’d have,” forward Hannah Stewart said.

“They’d have a lot of fun,” guard Tania Davis agreed. “We never disappoint.”