Nicholas Baer played his last game in Carver-Hawkeye on March 2, and the Iowa basketball program honored him for his five seasons of work. 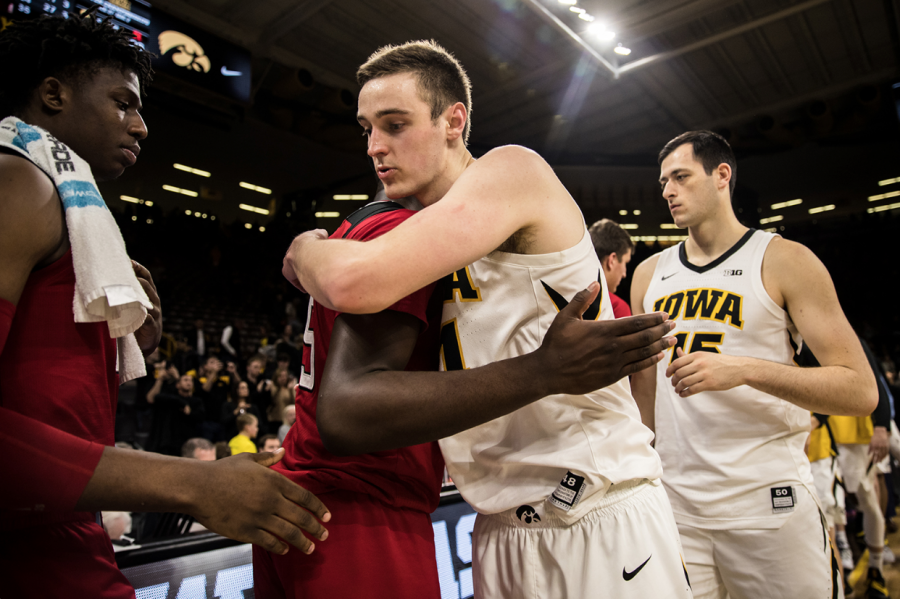 When fifth-year senior Nicholas Baer picked up his fifth and final foul during Iowa’s 86-72 loss to Rutgers, the Carver-Hawkeye crowd members rose to their feet as one.

Baer turned and waved to the fans before hugging each of his teammates on the floor.

The crowd continued its standing ovation as the Bettendorf native made his way to the Hawkeye bench. Baer hugged his coaches and proceeded to embrace every member — players and managers included — of the Iowa basketball program sitting in the first row of chairs.

“No one ever wants to go out that way, but at the same time, I couldn’t be more grateful, more thankful to everybody who made it out to support us and support me,” he said. “It’s been a great five years here.”

March 2 marked Baer’s final home game in a Hawkeye uniform, capping off a career for the ages. He’ll finish his career as the only player in Iowa’s program history with 725 points, 500 rebounds, 100 blocked shots, 100 steals, and 100 3-pointers.

“He’s a special young guy to this program, to this state, to this university, and he’s done a phenomenal job from Day 1,” Iowa assistant coach Andrew Francis said. “He came in here and wanted to have an opportunity to be a part of something bigger than himself. For him to put together the career that he has, it has been an unbelievable thing to witness and be a part of.”

Baer finished the Rutgers game with a team-high 17 points. He also grabbed 6 rebounds and drained four of his 12 3-point attempts.

Prior to the loss against Rutgers, Baer’s career-high for 3-point attempts was seven.

“I gave him a little tap on the shoulder and said, ‘I’m glad you shot 12 3s tonight, there’s no better way to go out in Carver,’ ” Jordan Bohannon said.

Minutes before the tip-off, Baer went to the middle of the court and stood with head coach Fran McCaffery and the the Baer family. Holding a framed jersey, Baer posed for photographs and received his first standing ovation of the day.

“It’s a special moment,” he said. “The opportunity to give a hug to Coach McCaffery, and I couldn’t be more thankful to him and for the opportunity he’s given me. To just have my whole family out there, that was great as well. Everyone that was out there is special to me.”

With just two games remaining in the regular season, Hawkeye fans don’t have too much time left with one of the most high-energy players to come through the program.

Baer’s five years at Iowa are nothing short of remarkable — a walk-on who worked his way into starter minutes to earning the Big Ten’s Sixth Man of the Year award after the 2016-17 season.

But Baer’s off-court legacy is what many will remember him for.

“I stopped calling him ‘Baer Cage’ and started calling him ‘Care Baer,’ because he cares about everybody and everything,” Francis joked after the game.