Iowa found itself racing toward personal records from the opening event on Day 3. 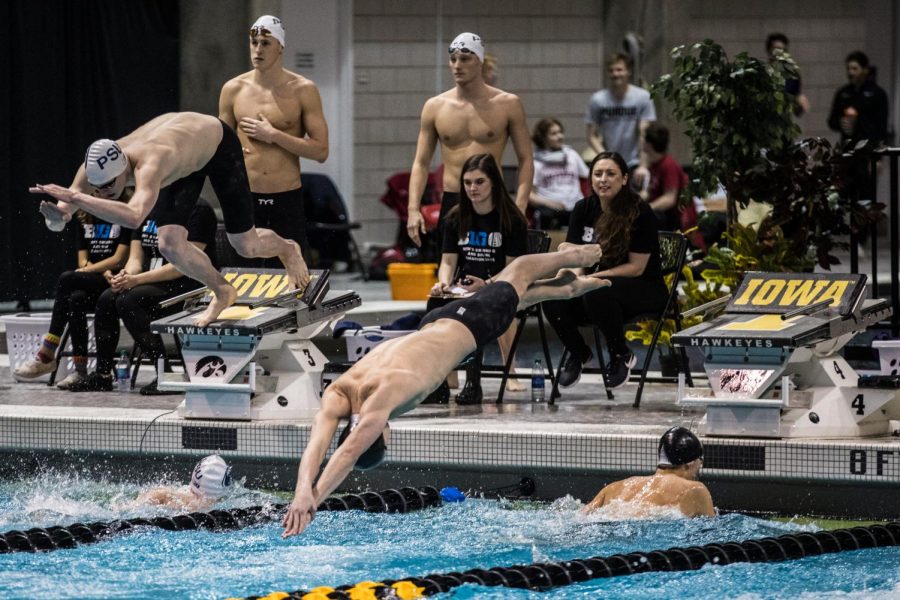 Iowa swimming and diving wrapped up Day 3 of the men’s Big Ten Championships by continuing to break personal records.

The first race of the day was the 100 fly, and while no Hawkeyes qualified for the finals, junior John Colin swam to a personal record of 49.46 during the opening event.

Tenney’s and Fers Erzen’s times were good enough to earn a spot in the ‘C’ finals. In those finals, Fers Erzen edged out Tenney’s preliminary time by .01 with a 3:50.09, taking over the fourth spot in program history, breaking the previous personal best he swam earlier in the day.

In the 100 breast, four Hawkeyes broke their personal bests and made their way into the finals. Sophomore Daniel Swanepoel made it to the ‘B’ final with a prelim time of 53.46, which earned him the second-place spot in program history and a short-lived personal record. In the ‘B’ final, Swanepoel would flirt with earning a sub-53 time with a new personal best time of 53.06 where he would remain second in school history.

Earning a spot in the ‘B’ finals of the 100-back was redshirt senior Kenneth Mende, who swam a time of 47.15 in the prelims. Mende would swim a little faster in the finals, finishing 11th overall with a season-best time of 47.10. In the prelims, Colin swam to the eighth-fastest time in program history with a career-best mark of 48.61.

No one would dive their way into the finals off the 3-meter springboard, but sophomore Jonatan Posligua dove to a personal best score of 326.85 which earned him 18th place overall.

The final event of Day 3 was the 200-free relay, and swimming for the Hawkeyes was a team of Joe Myhre, Will Scott, Steve Fiolic, and Jack Smith. Coming into this meet, the Hawkeyes were ranked at No. 4 in the Big Ten in this event. Iowa would swim to a fourth-place finish in its heat with a time of 1:17.65, ranking third in school history and earning fifth place overall, but after Purdue was disqualified for an early takeoff, Iowa would earn fourth place overall.

“Overall, when you look at the day and you’re looking at the best times for the day and things like that, it’s great,” head coach Marc Long said. “Yeah, you want to win everything we set out to do, absolutely. They work hard, but I know we look forward, there is so many good things going on as they get ready for tomorrow and we got a lot of opportunities tomorrow.”

At the end of Day 3, the Hawkeyes fell down in the rankings in points to No. 8 with 359 points. Indiana currently leads the championships with a total of 1,144 points.