Gary Barta, Gary Dolphin, and Fran McCaffery spoke on Wednesday about the suspensions that have been issued. 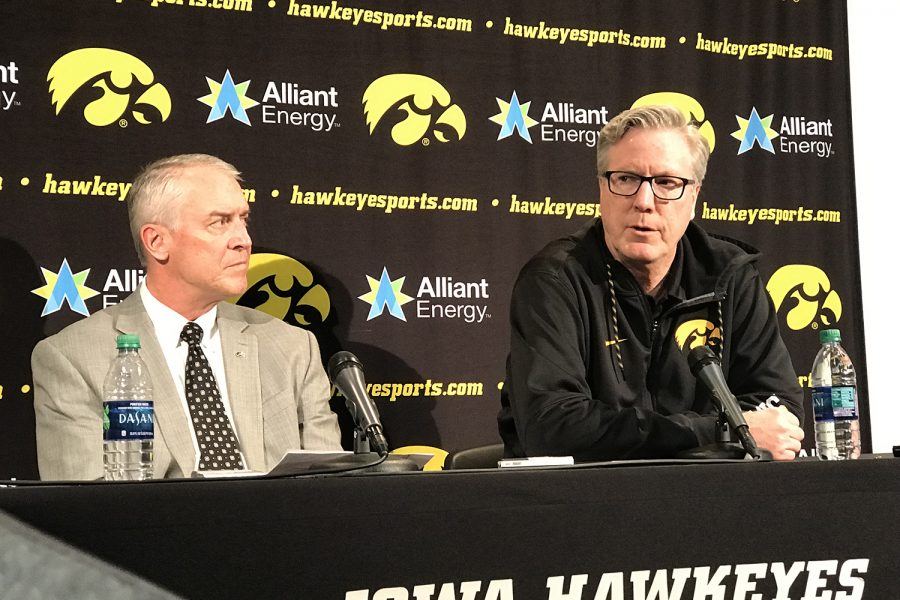 A week full of off-court issues stealing the attention from the No. 22 Iowa men’s basketball team is almost over, it seems.

Iowa Athletics Director Gary Barta and Hawkeye play-by-play announcer Gary Dolphin met with the media on Wednesday for the first time since Dolphin was suspended for the rest of the basketball season for referring to Maryland’s Bruno Fernando as “King Kong” after the Terrapins’ 66-65 victory in Carver-Hawkeye on Feb. 19.

Barta and Fran McCaffery also discussed McCaffery’s two-game suspension for reportedly calling a referee a “cheating [expletive]” and “[expletive] disgrace” after the Hawkeyes’ 90-70 loss to Ohio State in Columbus on Tuesday.

It was a press conference that Iowa had put off for a while, but Barta appeared intent on getting the focus back on the Hawkeye players.

“The season that Fran and his team are having is terrific, the season Lisa [Bluder] and her team are having is wonderful, wrestling,” Barta said. “There are so many good things happening. The goal [Wednesday was] to work through and get the focus back on the student-athletes and the success that they’re having.”

That’s a lot easier said than done, though, when the biggest sports story in the state revolves around the team’s coach and play-by-play guy.

But now, more light has been shed on the situation.

Dolphin will return to being the Voice of the Hawkeyes during spring football, continuing his duties for the 2019 football season and 2019-20 men’s basketball season.

Despite potentially causing a distraction for the Hawkeyes — this marks his second suspension of the season — Dolphin said his relationship with McCaffery is in a good place.

“I told him I’m sorry I’ve become a distraction to the basketball team, it was completely unintentional,” Dolphin said. “We had a great conversation … It was positive, it wasn’t negative.

“Fran’s got an Irish temper like I do, so our collisions and disagreements have all been professional. It has everything to do with style, and we adjust … We’ve had our differences and our issues, but at the end of the day, we talk, and we hug, and we shake hands.”

On the floor, things will certainly be different for the Hawkeyes in the next two games. Andrew Francis will serve as head coach when Iowa takes on Rutgers on Saturday, and Kirk Speraw will assume the role when Iowa faces Wisconsin on March 7.

McCaffery will still be allowed to participate in Senior Day activities with Nicholas Baer prior to Iowa’s game against Rutgers before leaving the floor.

It’s entirely possible that McCaffery wouldn’t have been suspended had the incident occurred in private, as the coach had wanted.

RELATED: Hensley: Another debacle, courtesy of the Iowa Athletics Department

“I said what I said back in the tunnel directly,” McCaffery said. “I didn’t want it to be public. I didn’t say it out on the floor in front of thousands of people. I said it directly to him, and somebody ended up hearing it. OK, it’s unfortunate, but that’s the reality of the situation. My intention was for this to be sort of a private conversation.”

Even though McCaffery admittedly made a regrettable comment, it has been clear throughout the incident that he has his team’s back.

“The relationship with your players has to be real,” McCaffery said. “You ask anybody who has ever played for me, they know and understand what that means. That relationship goes on forever.”