Neal: Populist politics: What is it good for? 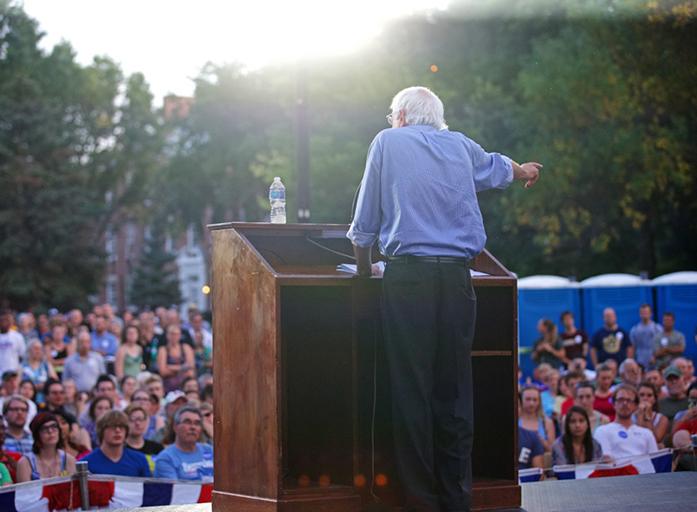 US Senator Bernie Sanders speaks at Coe College in Cedar Rapids on Friday, Sept 4, 2015. Sanders is running for president in 2016. (The Daily Iowan/Lexi Brunk)

The Iowa caucuses are less than a year away.

That’s the word that comes to mind when I think of the craziness bound to ensue once we know who’s squaring-up against far-right President Donald Trump.

As the Democratic roster becomes fuller, I can’t help but wonder one thing about each prospective president: What would a live debate between this candidate and Trump look like?

Now, I’m not going to write about which Democrat(s) has my full support (yet), BUT I am going to discuss who I think would engender the most heated debate, and better yet, why the idea of this heated debate concerns me.

A heated debate against Trump … who comes to mind?

Ah, yes, none other than “independent” Vermont Sen. Bernie Sanders.

But it’s not just his radical ideas that set him apart from the rest —it’s the way he speaks to invoke emotion in his listeners.

And interestingly enough, this method of speech is something he and Trump have in common.

All right now…before my fellow left-leaners bombard me with angry comments, let me assure you: Should he hold the nomination, Sanders will have my undivided support. And I am in no way suggesting Sanders and Trump deliver the same quality or content when it comes to public speaking. What I am saying is this — one word connects the two: populism.

A populist, by Merriam Webster’s definition, is a member of a political party claiming to represent the common people.

Trump gained support by claiming he’d “drain the swamp” and rid Washington of its corruption.

RELATED: Mahoney: A large field could bring out the radical Democrats – we’ve seen this before

Sanders gained support by calling out big business and its threats to the common worker — he, like Trump, called out career politicians and corruption in Washington.

Though a self-proclaimed independent, Sanders is running on the Democratic ticket. As I’ve said before, I think Democrats need to be open-minded when it comes democratic-socialist ideas such as his — denying them may further divide the left.

My concern, however, has nothing to do with Sanders’ merit or credibility.

My concern goes back to the 2016 election, when center-left Democratic candidate Hillary Clinton, who, on paper, was one of the most qualified candidates to ever run for the Oval Office, lost to someone with practically no political experience.

Trump basically won the White House because of his populist rhetoric, and I’m afraid that every candidate will have to tailor her or his campaign agenda to populist ideas.

Listen, radical ideas can be great, depending on what said ideas are, and desperate times can call for desperate measures. But they’re not the only good ideas out there.

I got some grief from fellow liberals after I cast my 2016 vote for Clinton — not even because of the “controversy” people so commonly put on her name but because she wasn’t “exciting.”

I kept hearing she was just the boring, establishment candidate.

Inspiring and igniting the fire of democracy in voters, especially young voters, is great.

Though I reject the notion that a candidate has to be exciting to outstandingly serve the American people.

But who knows, maybe the idea of a “boring” politician will one day be a radical idea, too.