Board of Regents discusses razing two houses across from UI campus

The University of Iowa asked the state Board of Regents for approval to raze two houses located across from campus; the regents said they would most likely recommend the razing. 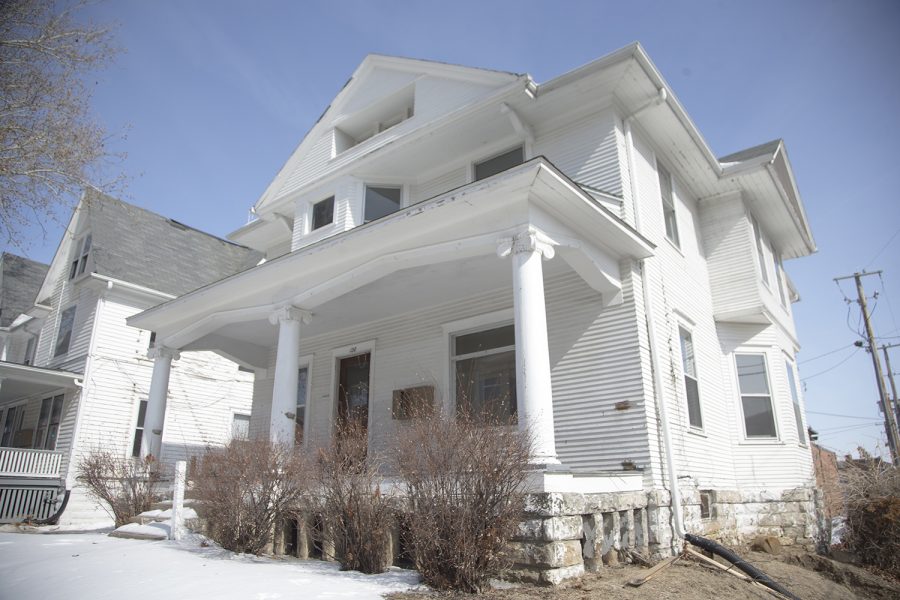 The houses at 120/124 N. Clinton St. are seen on Wednesday. The city is razing the houses because they need maintenance for not meeting the city building code.

The University of Iowa is requesting permission to raze Iowa City houses — one of which is believed to have been home to famous UI alum and American playwright — to turn the locations into green space.

The regents listened to the UI’s request to demolish two buildings on North Clinton Street and convert them to green space in accordance to the university’s master plan at the regents’ Wednesday meeting. The regents will decide today.

The houses are located at 120 and 124/126 N. Clinton St. The UI previously razed the house located next to the two properties, 128 N. Clinton St. That site was also returned to green space, according to regents’ documents.

“Obtaining this land is part of the university master plan as the property is directly across from the university and the [Pappajohn Business Building],” UI spokeswoman Jeneane Beck said in an email to The Daily Iowan.

The UI doesn’t have plans to put another building on the site, Beck said. The sites will remain green space until a future use for the land is determined.

Both buildings date back to the 1900s and have been used as rental residences. Currently, both buildings need maintenance and don’t meet the city of Iowa City’s building code, according to the documents.

“[The buildings] have been modified and undermined, both in structure and architecture, for decades, and in fact, in some of the emptying of these by former owners, one of them doesn’t even have an existing staircase to go to the second floor,” UI Senior Vice President for Finance and Operations Rod Lehnertz said in the meeting.

Because the sites sit directly across from campus, they can be used in long-term planning options and protect the properties from being used for other developments, Lehnertz said. The UI purchased the buildings specifically for demolition, and the space would be available for future development plans, he said.

According to regents’ documents, neither of the buildings are historically significant or protected under local or federal standards. The university has always intended to raze the buildings, the documents said.

The buildings are not local landmarks and, therefore, are not regulated by the city. They are also not located in a local historic or conservation district, Iowa City historic preservation planner Jessica Bristow said in an email to the DI.

It is believed that UI alum and Pulitzer-Prize winner Tennessee Williams, well-known for writing A Streetcar Named Desire, among several other plays, lived in 124/126 N. Clinton St. when it was a boarding house, Bristow said. The house is on the Iowa City Literary Walk because of Williams’ famous plays.

The same house at one point had 15 rooming units, a form of affordable housing that is normally only available when an older building has had units like this for decades, Bristow said.

“We would like to preserve and maintain viability in important historic structures and in many neighborhoods,” she said. “Affordable housing and walkable neighborhoods are found in many of Iowa City’s historic districts. The community works to preserve its history to maintain those aspects but also because a community’s history is what makes it unique and memorable and will usually draw in new residents and visitors.”