The Hawkeye head coach will not be on the sidelines when Iowa faces Rutgers on Saturday and Wisconsin on March 7. 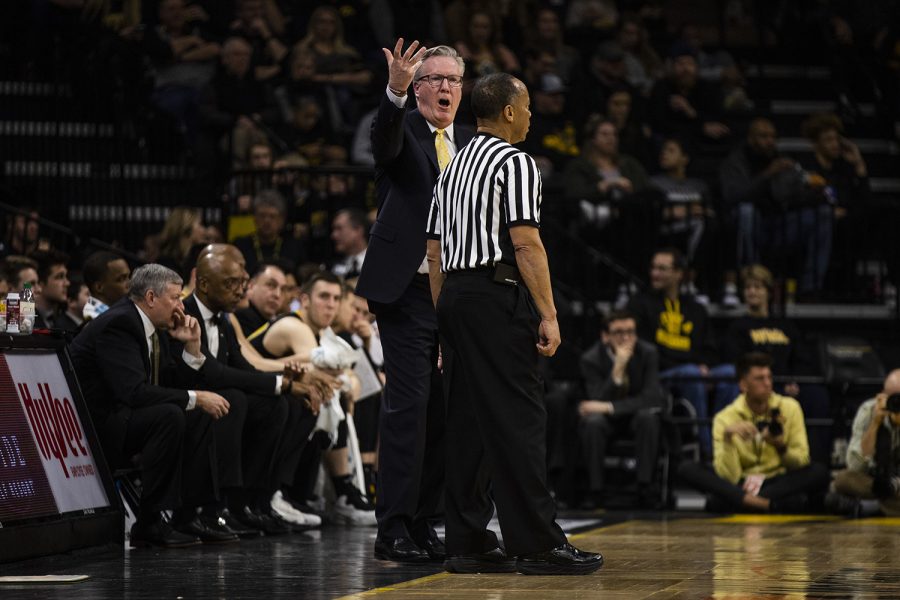 Iowa head coach Fran McCaffery reacts to a call during the men's basketball game vs. Indiana at Carver-Hawkeye Arena on Friday, February 22, 2019. The Hawkeyes defeated the Hoosiers 76-70.

The suspension comes after McCaffery reportedly yelled at a ref following Iowa’s 90-70 loss at Ohio State, calling him a “cheating (expletive)” and “(expletive) disgrace” in the hallway of Value City Arena in Columbus.

“I am in total agreement with the suspension by Iowa Athletics and the fine levied by the Big Ten Conference,” McCaffery said in a release. “My comments directed toward a game official were regretful. I apologize to Big Ten Conference officials, Iowa Athletics, my players and staff, and the tremendous Hawkeye fans. This behavior is not acceptable and I take full responsibility for my inappropriate comments.”

Barta said that while McCaffery’s comments do not represent the Iowa program, the head coach will continue to have his full support.

“Fran immediately accepted responsibility for his comments and understands the severe implications of his remarks,” Barta said in a release. “Fran fully understands this suspension and penalty imposed by the Big Ten Conference. Fran continues to have my full support moving forward.”

McCaffery and Barta will hold a press conference Wednesday at 3:20 p.m.