‘Ranch Girl,’ whose exploits went viral online after a Kirsten Gillibrand event, on the pressures of fame

A simple moment between a UI student on the search for ranch dressing and 2020 presidential candidate Sen. Kirsten Gillibrand garnered national media attention. 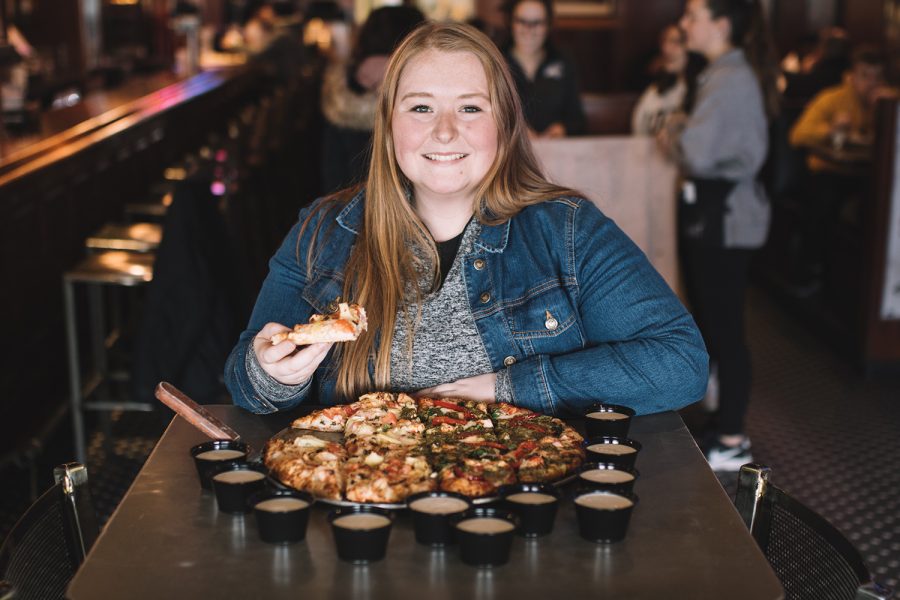 Hanna Kinney, Iowa City's very own "Ranch Girl," poses for a portrait at The Airliner Bar on Monday, Feb. 25, 2019. Kinney went viral after appearing in a video attempting to get past Sen. Kirsten Gillibrand, D-N.Y. at a campaign event on Feb. 18, 2019, saying, "I'm just trying to get some ranch."

University of Iowa student Hanna Kinney was leading a Bible study on the second floor of the Airliner while 2020 presidential hopeful Gillibrand held a town hall on the main floor.

Kinney, who leads the Freshman Connect Bible Group (which she has been a part of for three years), said she was the designated member assigned to fetch the ranch dressing for the rest of the group.

“I saw there was something going on, and I thought ‘Classic Iowa,’ ” Kinney said. “I was trying to get through the crowd, and I’m pretty short. I didn’t want people to think I was cutting in front of them, and I didn’t have a question, which is why I put my hands up.”

And here’s video of the woman “just trying to get some ranch,” while Senator Kirsten Gillibrand speaks to supporters in Iowa City. pic.twitter.com/6PRCVbbIQW

This moment created an online firestorm, with media outlets such as CNN, the Washington Post, and Elle all running stories.

“Two important things I know about Iowa: The caucus-goers are engaged and wonderful, and never get between a Midwesterner and their ranch,” Gillibrand wrote in her tweet.

“There’s looking at what’s on the internet … CNN did a story about it, and a couple other pretty great news networks, so something happens, and it was pretty instantly spread beyond just Iowa,” Heurmann said.

Airliner employee Ceci Fernandes said the national media attention has been beneficial, if not unusual.

“Most of the attention was online, and like a lot of things, something viral doesn’t necessarily impact our day-to-day here, so I don’t think we’ve had anything crazy happen,” Fernandes said. “But [Kinney] did come in to eat last night, and everybody immediately recognized her, so that was kind of funny.”

Two important things I know about Iowa: The caucus-goers are engaged and wonderful, and never get between a Midwesterner and their ranch. Pizza’s on me during the next trip to Iowa City, @kinney0116! https://t.co/2K4SP0hqCX

It was exciting for the Airliner staff to see the restaurant on “The Tonight Show starring Jimmy Fallon,” who cracked a joke about the ranch exchange, Fernandes said.

Kinney said, however, the attention has not come without at least a few downfalls.

She’s only responded to one negative comment, she said, in which an individual tried to body-shame her. Other than that, she said, she’s focused on the bright side.