Newby: Confronting sexual harassment and assault in college is crucial

Sexual harassment and assault spans across countless workplace industries – but confronting the problem should begin before people step into the workplace. 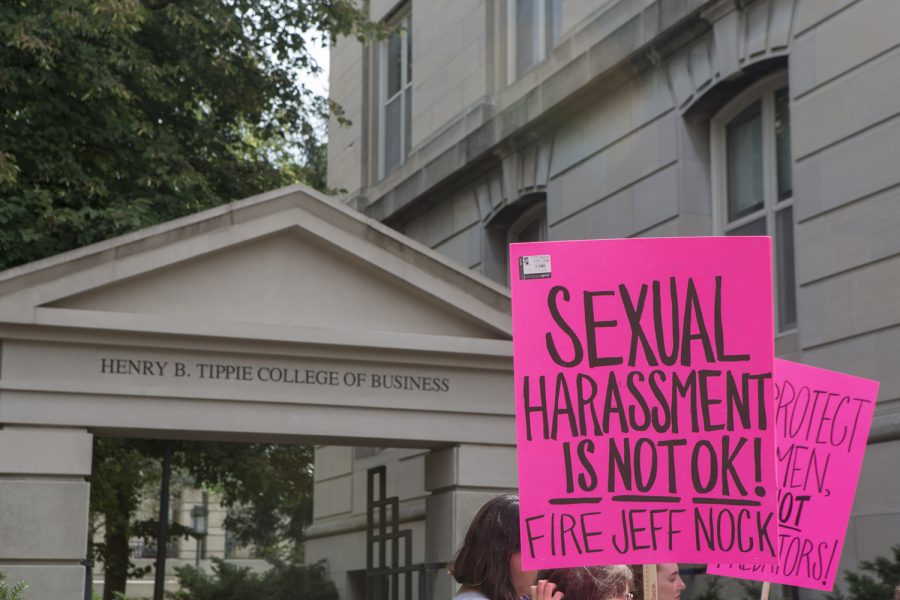 A protester holds their sign during the Jeffery Nock protest outside of the Pappajohn Business Building on Aug. 30, 2018. Students and faculty turned out to protest Professor Jeffery B. Nock, who is still employed at the university despite issued a criminal trespass warning after allegedly taking photographs of women at the Campus Recreation and Wellness Center.

The conversation about sexual harassment and assault has transcended global headlines, national initiatives, and the diligence of local advocacy groups — reverberating across all platforms the message of an incomparable need for immediate change. And it begins with college campuses.

Allegations of sexual misconduct have hit countless industries — crowding timelines and news outlets with incomparable stories shared openly and honestly. But these stories do not stop there.

Allegations are not limited to the industries that are widely covered by the spotlight, such as testimonies of harassment and assault that have broadly found a home in Hollywood or facets of the media. Instead, the allegations often expand across more unnoticed areas of society, in service jobs, retail trade, and even lecture halls.

And so, rather than settling into a routine of only ever busting the bad guy in Hollywood, we need to hold men and women accountable for sexual harassment and assault closer to home — whether that be our colleagues, our neighbors, or our professors.

Just last year, Jeffrey Nock, a lecturer in the Pappajohn Entrepreneurial Center was caught taking photos of women working out.

At first, he was only suspended from lecturing and banned from the Campus Recreation & Wellness Center for six months. But then, the UI announced he was no longer employed by the University in September following the sexual-harassment allegations. Even still, it had taken more than four months and a student-led protest via Facebook for the UI to fire this lecturer in the wake of allegations.

While these numbers are astounding, it’s important to acknowledge the number of men and women who are harassed and assaulted beyond their college years.

According to the National Sexual Violence Resource Center, 1 in 4 girls and 1 in 6 boys will be sexually abused before they turn 18. And a 2018 survey done by Stop Street Harassment, a nonprofit organization, found that 81 percent of women and 43 percent of men have experienced some form of sexual harassment throughout their lives.

All that to say, it is more than imperative that college campuses, such as the UI’s, use this four-year stretch of time that most students spend at a university or college to educate rising generations on the devastation and intrinsic destruction of sexual harassment and assault.

And then, staff and faculty of the university must set the example by encouraging students away from that power-hungry, position-abusing epidemic.

Because the problem of sexual harassment and assault is pressing, and because college comes at such a critical time in a person’s life, it’s now that we must be intentional about confronting it.

And with universities propelling thousands of students forward into powerhouse careers, it’s crucial that we keep the conversation going — and even more so that we keep taking action against the heart-splintering devastation that comes when positions of power are taken advantage of.