Closing the gap between police and IC Community Police Review Board

In an attempt to increase communication between the police and Iowa City Community Police Review Board, a proposal to begin one-on-one discussions with the police chief is in the works. 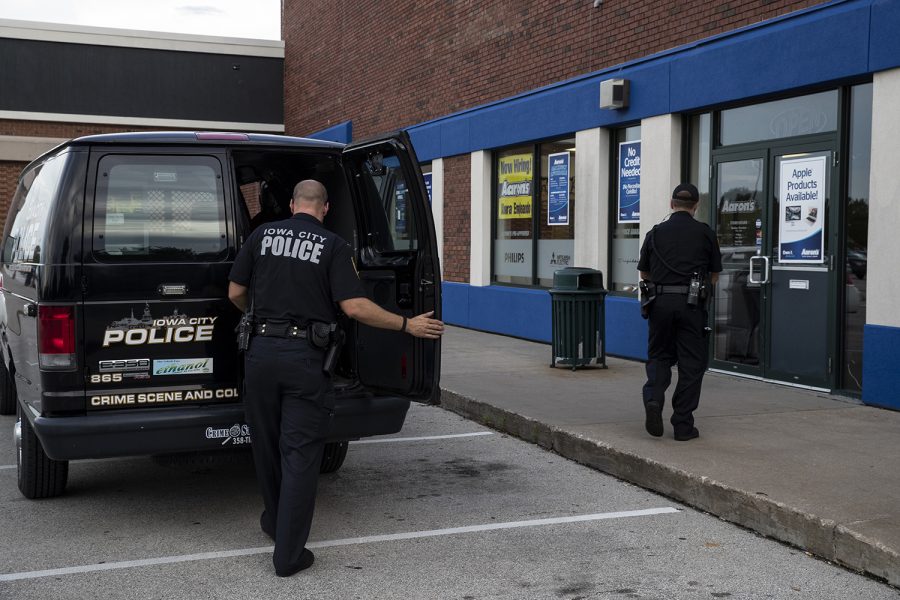 Police investigate the scene at the Iowa City Marketplace after reports of shots fired in the mall on Monday, Sept. 3.

The Iowa City Community Police Review Board is the only one of its kind in Iowa to review complaints and investigations against Iowa City police officers, and now board members plan to increase the transparency of the citizen-complaint reviews of the officers.

The review board was established to provide a process to review complaints submitted by the community. Police Chief Jody Matherly receives complaints from the Review Board for him to investigate.

According to public-information Officer Derek Frank, these complaints can range anywhere from a citizen disagreeing how a situation regarding an officer was handled to something an officer said.

Once a complaint is received by the board, it is referred to Matherly, who conducts an internal affairs investigation among officers, witnesses, and the issuer of the complaint.

While this process tends to work well, Matherly said, there have been a few instances where his findings and the board’s decisions disagree.

“Ninety-nine percent of the time, they have agreed with our findings,”  he said. “There have been three instances in the last several years where they have not agreed.”

Previously, there has been no procedure for the review board to talk with the chief when disagreements arise, said Donald King, the review-board chair.

The proposed increase in transparency has been approved by the City Council in its initial two readings. King said the ordinance will go into effect in April if the third reading is approved.

He said that although the deliberations on whether a complaint is sustained or unsustained will be closed-door, he believes the changes will be a comfort to the public.

“We want to be open as much as we can, but sometimes, that just isn’t legally possible. We want the public to see that we’re representing them,” he said.

Frank said the proposal of one-on-one conversations is welcomed by the police, because it allows both sides to present a clearer statement of their findings.

“We want it to be as transparent as possible,” he said. “We want to be able to provide our findings and be able to explain them as well to the review board if there is a disagreement. We welcome any opportunity to have discussions like that.”

While instances of disagreement have been few in number, Matherly said, the board wanted to make changes now while there is a high level of communication and trust between the two entities.

Frank said an increase in communication can only be a good thing. For the first time, members of the review board will have the opportunity to have one-on-one conversations with Matherly if a disagreement arises.

“The more communication that we have between the review board and the Police Department, the better things can be,” Frank said.