An Iowa City company wants to bring the latest technology to farming, but it needs expanded broadband for more intelligent drones. 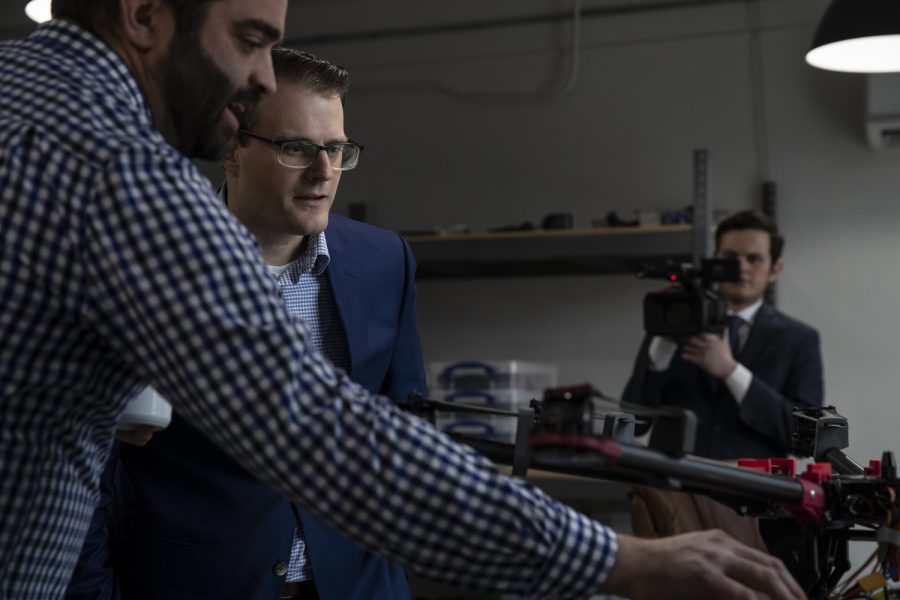 An Iowa City company seeks to bring new technology to the fields with automated drones, but employees would like Iowa Gov. Kim Reynolds to increase bandwidth in rural Iowa to help with connectivity.

On Monday, Lt. Gov. Adam Gregg visited the Rantizo office in downtown Iowa City to meet with the team, learn about the drone technology, and discuss how expanded bandwidth could increase the connectivity of the drones.

Rantizo CEO and co-founder Michael Ott said using drones for spraying crops can be helpful because they are able to be used in conditions in which traditional farm equipment may not be able to reach the crops, such as mud that makes the fields impassable. He noted that the drones would also use fewer chemicals by targeting specific areas in the field.

The drones identify problem areas in the field through imaging before using machine learning and artificial intelligence to diagnose the problems and prescribe the treatments for the area.

“Getting that data in and out is why we need rural broadband,” Ott said during a presentation for Gregg. “If we had true access everywhere, we could do [crop-spraying missions] completely autonomously.”

Rantizo Director of Technology Mike Schmitz said the precision in spraying that Rantizo drones use requires a large amount of data use, and more broadband connectivity in the state, particularly in rural areas, will help farmers using the drone technology.

Increasing broadband connectivity was one of the recommendations given to Reynolds after her Empower Rural Iowa initiative, a statewide task force that Gregg co-chairs.

“That’s the way this technology can be leveraged is if there’s connectivity in all parts of our state,” he said.

In her Condition of the State address, Reynolds announced her plans to increase broadband infrastructure across the state, calling on lawmakers to appropriate $20 million split between fiscal 2020 and 2021. In her address, she said the funding would accelerate expansion and leverage $120 million more in private investment.

“Over a century ago, a town’s proximity to the railroad was key; over the last 100 years, our focus has been on highways and interstates,” Reynolds said during her Jan. 15 address. “Now, though, it’s virtual connectivity that has become essential. Businesses, schools, hospitals, and even our combines rely on high-speed internet.”

Gregg said there is a broadband grant program in existence, but it has not received significant funding in the past. The program directs funding to unserved and underserved parts of the state

“That’s not always necessarily rural areas, but for the most part, that’s going to be rural areas that are going to be able to take advantage of that [grant funding],” Gregg said.

Iowa City was just one visit in Gregg’s three-stop trip to eastern Iowa, according to his public schedule. He started the day in Amana at the Amana Woolen Mill and ended it in Keota at the Ramsey Building.

Rantizo was founded in January 2018 and began its initial field trials in July. Ott said he hopes to grow the company by adding more employees, conducting more field trials, and filing patents for the technology.