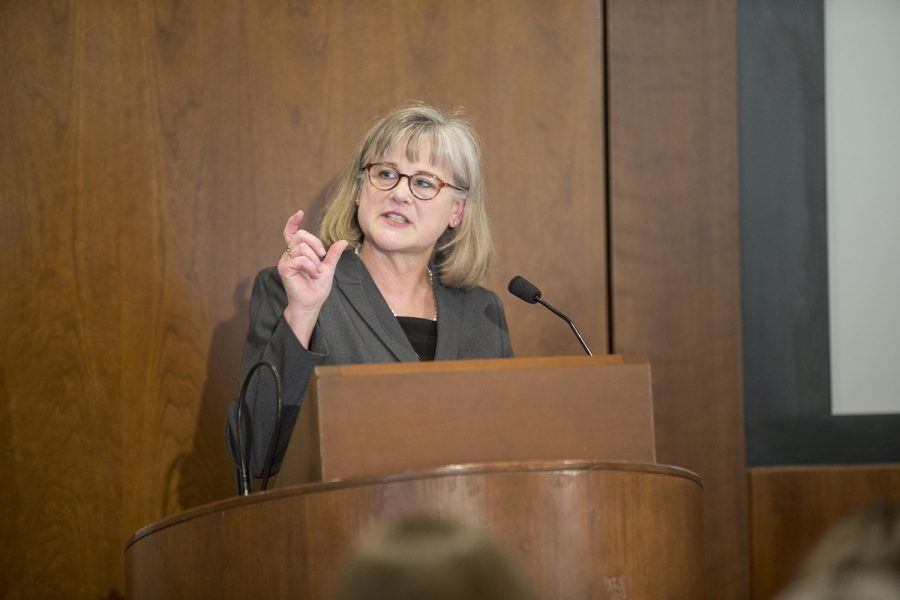 Professor Karen Heimer speaks during the 36th Annual Presidential Lecture at the Levitt Center in Iowa City on Sunday, Feb. 24, 2019. Heimer was speaking about her research on violence against women in the United States.

UI Professor Karen Heimer delivered the 36th-annual Presidential Lecture, “Violence Against Women: The Hidden Figures,” on Sunday. The lecture focused on the rates of violence against women and how the intersection of identities leads to different rates of violence.

As a professor of sociology and gender, women’s and sexuality studies, in addition to being the president of the American Society of Criminology, Heimer said the lecture and her research involve information from both areas of her study.

The lecture also focused on research conducted by Heimer and colleague Janet Lauritsen at the University of Missouri. In the lecture, Heimer said the research focused on hidden violence in terms of consequences and costs, extent and patterns of violence, differences across groups, and the programs and facilities in place to address this violence.

Rebecca Swanson, a UI second-year student studying music education, who attended the lecture, she said the subject matter was very important for women.

“When women are feeling empowered and they feel safe in the environments …  they’re able to thrive and ultimately bring everybody up and just pull back the idea that women are any different from men,” she said.

In an interview with Heimer, she said she is also conducting research in the United Kingdom with a colleague that focuses on the juvenile justice system in England and Wales in terms of treatment of female offenders.

“The U.S. is complex to study, because we’re kind of like 50 little countries. Each state has its own … juvenile justice system, and there’s a lot of local variation,” Heimer said. “So it’s a lot easier to study England and Wales … because it’s one juvenile justice system, and so the laws are all the same, the procedures are all the same, that type of thing.”

Heimer said the research revealed a trend in “de-incarcerating” girls for the past five to seven years. Instead, she said, the female offenders are being placed in communities. Heimer said that in the research, ethnic trends have become apparent.

“What we think we have found is that when they started releasing kids or not sending kids to the institutions … instead kind of keeping them in the community for ‘supervision,’ ” she said. “When they started doing that, that kind of looks like it benefited white kids more than black Caribbean and black African kids there.”

“The important points were focusing on the whole problem of hidden figures with the intersection of violence against women … which, in turn, can help policy and organizations that can help,” she said.

Heimer said she was surprised and honored to have been chosen for the Presidential Lecture. She had no idea she was being considered, she said, and being chosen by UI President Bruce Harreld from a list of committee recommendations was amazing.