The city of Iowa City continues to struggle through the dangerous winter weather season, finding itself using the vast majority of the city’s salt supply. 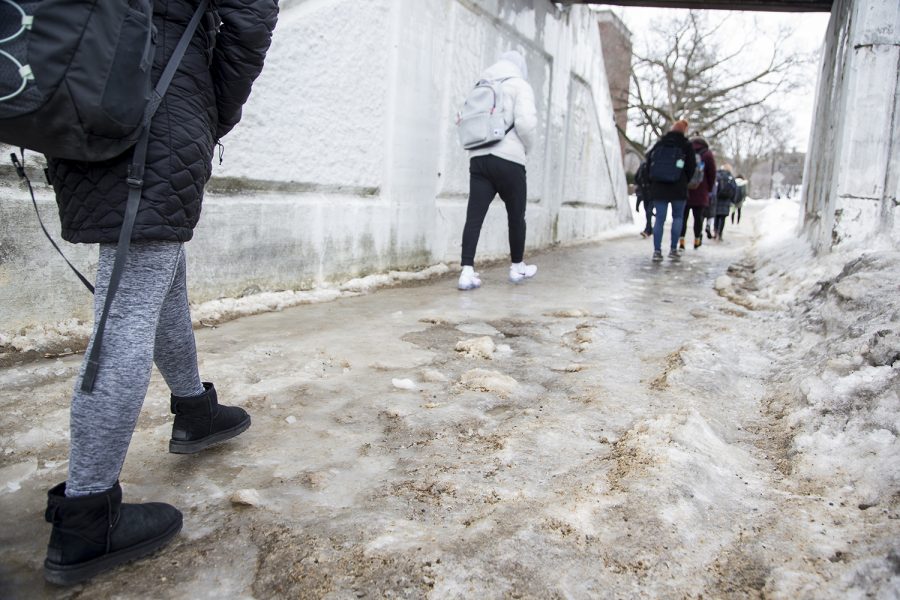 Students walk across a sheet of ice in Iowa City on Monday, February 25, 2019. Ice froze over pavements after the rainy weekend, but Iowa City is running out of salt to clear sidewalks.

People walking around Iowa City sidewalks may (or probably) find themselves slipping and sliding because of the harsh Midwestern winter. In an attempt to tip-toe over the ice, people may even step into what they believe is solid ice but really is a puddle of freezing ice water, resulting in wet feet for the day.

The city of Iowa City has used all of its salt for the winter for public areas, said Superintendent of Streets and Traffic Engineering Brock Holub, but the city expects shipments beginning early this week.

“This year, we have used more than previous winters,” Holub said. “Our salt shed can hold 3,500 tons of salt. Right now, we’re next to nothing. Loads will be coming in soon, and we have enough for a few more snow storms, and hopefully, we continue to get more as the snow continues.”

Holub said the city has used a significantly large amount of salt this year compared with previous winters.

While Iowa City deals with combating winter weather in public areas, Stan Laverman, the city senior housing inspector, said residents and businesses are still expected to spread salt on their own properties.

“The city of Iowa City is not responsible for the sidewalks in front of houses and businesses,” Laverman said. “That is the responsibility of the private homeowner or the business owner.”

Residents who choose not to clear their sidewalks within 24-hours of a one-inch or greater snowfall or after ice has accumulated can be subjected to a fine, according to the city of Iowa City website.

Also, residents may file a report for a property that has unsafe public sidewalks by downloading the free ICGovXpress mobile app, visiting the Iowa City website, or calling the complaint hotline.

The inclement weather has led to many local schools to cancel classes in the district. The cancellations mean an additional 10 minutes added to each School District elementary, junior-high, and high-school day, according to a Facebook post.

In addition to the added time, cancellations have added an April 26 snow makeup day and a May 31 half-day makeup.

Because of the weather conditions, the UI canceled classes just a few weeks ago via a Hawk Alert. Temperatures had been anticipated to reach as low as 51 below zero in the area.

UI Facilities Management Associate Director of Landscape Services Scott Gritsch said the university has a contract for 500 tons of salt with its vendor each winter season. Landscape Services has 36-lane miles of institutional streets and roughly 65 miles of sidewalks to tend to during and after snowstorms, he said.

“The last several winters, we have only used approximately 250 to 300 tons,” Gritsch said. “This season, we have used 75 percent of the contracted 500 tons and an additional 100 tons that was left over from last year. We have been mixing more sand with the salt to make sure there is enough salt to get through the remaining winter snow events.”