Winter has posed challenges to the Kent Park Lake re-establishment project, which began in 2016. 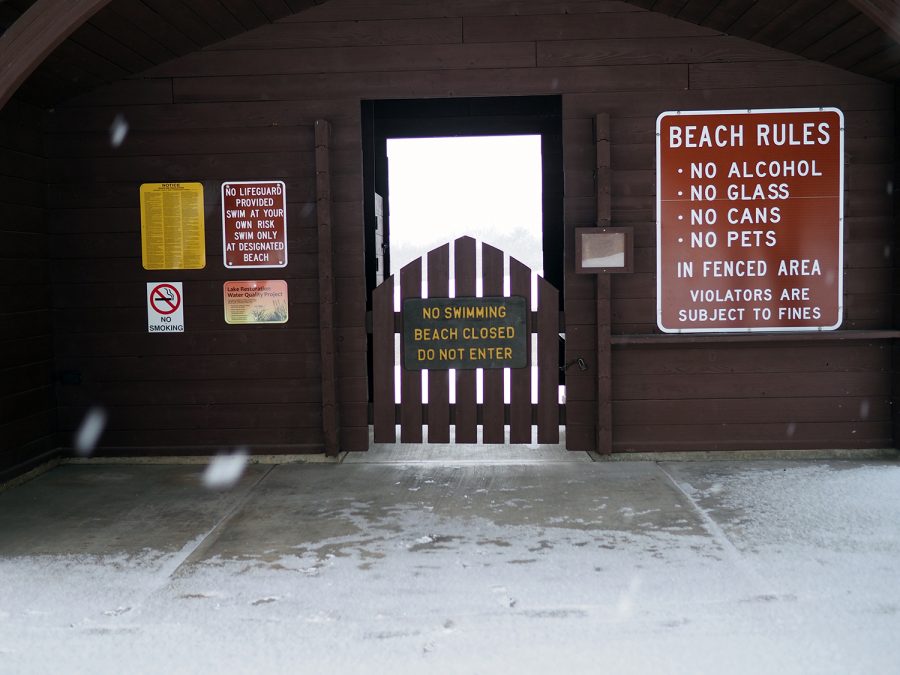 Officials hope to complete the second phase of Kent Park Lake’s re-establishment project in the spring, despite complications from winter.

Larry Gullett, the project head and director of Johnson County Conservation, said the construction in the main basin of the lake is finished, and the remaining steps involve completing a new control structure and reshaping the dam.

“This winter has been so severe with the depth of frost and the snowfall,” he said. “Normally by mid-February, a lot of the snow is melting. Well, right now, everything is still frozen solid.”

Workers need the ground to be frozen in order to access the wetland areas and remove dredge materials, but the snow has hindered progress. He said the best thing to happen for construction would be freezing temperatures and no snow, but the heavy amount of snow creates wet conditions, complicating the process.

Kent Park Lake was listed as “impaired water” before the project started, meaning it exceeded Department of Natural Resources and EPA standards for bacteria and algae. The result was a green lake.

Kent Park ranger Charlie Bray said during the run-up to the project, it was clear something needed to be done.

The swimming beach, one of the park’s main attractions, had issues with algae for aesthetic reasons and because the algae was releasing toxins, he said.

“We had to routinely close [the swimming beach], and in my six years here, it seemed like we were closing it more and more because of the algae blooms,” Bray said.

Gullett said excess algae is caused by excess nutrients in the water, in this case, agricultural runoff.

“Even though we are addressing the impairment of algae and bacteria, what we really have to control is the nutrient load,” Gullett said.

The first phase of the project revolved around working on and protecting the watershed, building five new “catch basins,” or ponds, and rehabilitating four existing ponds. The process finished last fall, after taking a year and a half to complete.

Workers also redesigned the parking lot by the lake to prevent stormwater runoff from ending up in the lake, so now stormwater runs through a biocell filter before entering the lake.

“Though there have been some delays along the way due to extreme weather and other factors, the project is moving along nicely,” Johnson County Board of Supervisors Chair Lisa Green-Douglass said in an email to The Daily Iowan. “I am excited to see the project finished.”

For the second phase, workers drained the lake, and the county contracted Conley Construction to dredge more than 1,000 cubic yards of sediments that had accumulated during the lake’s 40-year existence and construct four underwater fish reefs.

“It’s a pretty big project financially, with all the design and construction. It’s probably a $3.3 million project,” Gullett said. “And 50 percent of the funding is coming from the state of Iowa’s lake-restoration program.”

“It’s neat to watch this transformation, but it’s not without its frustrations,” Bray said.