The Hawkeyes had a roller coaster of a day, but in the end, were unable to retain momentum against No. 2 Oklahoma State. 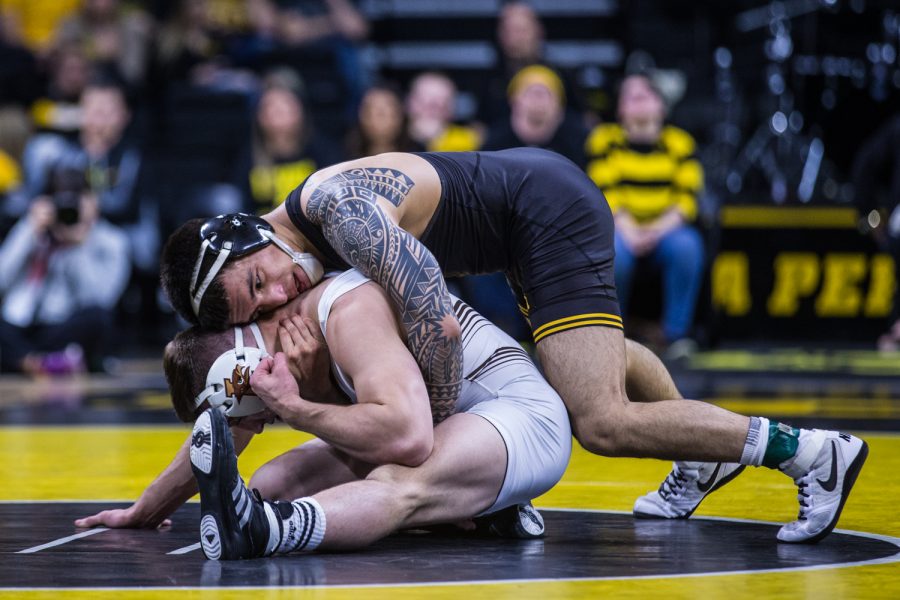 Iowa's Pat Lugo wrestles Lehigh's Jimmy Hoffman during a wrestling dual-meet between Iowa and Lehigh at Carver-Hawkeye Arena on Saturday, Dec. 8, 2018. Lugo, who is ranked tenth at 149, defeated Hoffman 12-3, as the Hawkeyes defeated the Mountain Hawks, 28-14.

Four losses at the tail end of No. 3 Iowa’s lineup were the difference in its 27-12 loss to No. 2 Oklahoma State on Sunday.

In the final regular season dual meet of the season, the battle between undefeated NCAA Champion hopefuls began completely in Oklahoma State’s favor.

Arguably the biggest surprise of the dual came at 125 when No. 2 Spencer Lee went down by fall in the second period of the opening match for his second loss of the season.

“We got in positions in, as a coach, if I was the opposing coach of our guys, I would do those things,” Iowa head coach Tom Brands said. “Those shortcuts sometimes that we go to will bite you eventually. Today, they bit us.”

What seemed like would be Iowa’s one-two punch at the top of the lineup at the beginning of the season led Oklahoma State to a 9-0 lead. No. 3 Austin DeSanto lost by a 2-0 decision to No. 2 Daton Fix, with riding time being a factor in the third period.

Up third for the Hawkeyes, No. 16 Max Murin lost narrowly, 8-6, in a match that could have gone longer than three. A late takedown put Murin in arms reach of tying it up, but Oklahoma State closed the match out on a defensive side.

“We showed some progress even in some matches where maybe we didn’t have the result we wanted, but we have to come off the bottom,” Brands said. “We have to wrestle full seven minutes like you’re the hammer.”

At 149, the match shifted in Iowa’s favor. No. 12 Pat Lugo tallied an upset win for the Hawkeyes over No. 6 Kaden Gfeller, 7-4, with 2 takedowns doing the trick.

The sold-out crowd and atmosphere during the top-5 matchup was a motivating factor in Lugo’s match.

“It’s just another match, I went out there with a game plan,” Lugo said. “I think I wrestled better going into enemy territory because I had a chip on my shoulder, I got something to prove in front of a bunch of people. I just went out there, wrestled my match, and got the job done.”

The Cowboys’ lead was cut in half by No. 7 Kaleb Young. He dominated on the offensive, 9-5, for the win over Wyatt Sheets.

And then, No. 2 Alex Marinelli came and went.

Marinelli made quick work of his opponent with a pin in 2:44. He held an 8-0 lead up until that point, shifting the meet from Oklahoma State’s control to a tie.

“I’m just going to do my job,” Marinelli said. “I knew the team score was going to be close and I knew I had to get bonus points in whatever way I had to. A pin was what I wanted and what I always want.”

Marinelli’s projected opponent, No. 10 Chandler Rogers, moved up to 174 for the dual to wrestle unranked Mitch Bowman instead.

Oklahoma State rallied in what should have been a momentous finish for Iowa, taking the final four matches with a pin at 174 and three decisions.